Many Faces of the Swamp Sparrow 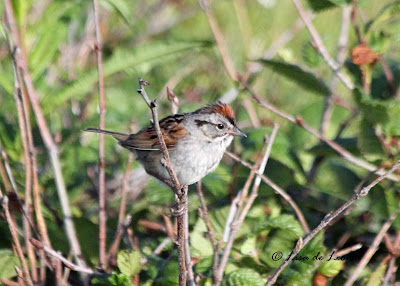 I have said it before and I will say it again, not every bird is a picture perfect exemplar of its species. Over the summer I have collected a number of pictures of many birds, as you can imagine. Today, I have selected a few Swamp Sparrows to illustrate my point. So if they don't all look alike, how do you know it is a Swamp Sparrow. I am going to share some of the features that helped me even when the bird looks very different. 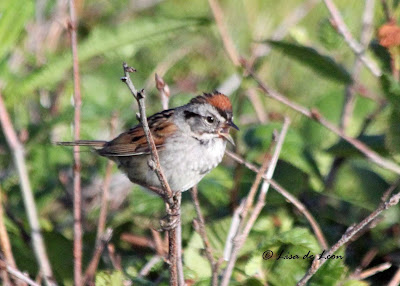 These first two pictures are great examples of a Swamp Sparrow in its breeding plumage. It is considered among the rusty-capped sparrows when it is in this breeding season. Sometimes the cap looks really reddish and other times not so much.  This bird has black showing in the superloral but the guides that I have don't mention this even though some of the illustrations show it. 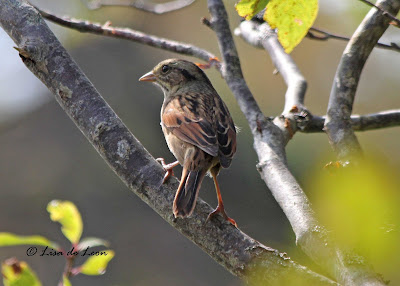 The Swamp Sparrow has a black line that starts behind the eye and runs the length of the head. It widens as it moves back. There is also a thin black malar that frames a white throat.  The Swamp Sparrow is also classified as a streaked sparrow. This is because of the streaks on its back and the hint of streaks on its gray breast. Now, the two pictures above do not show any breast streaking but rather show plain gray. The back is quite rusty and in the bright light can look really red. (Note the tail on this bird.) 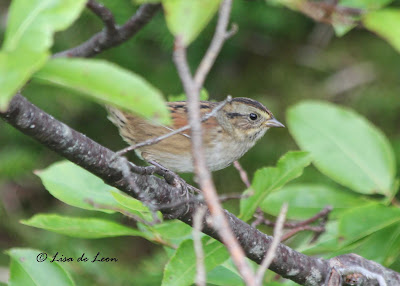 This little bird was photographed later in the summer. This bird does not have a reddish cap but shows two brown stripes on the head separated by a gray streak. What? They have a red head....they have a brown and gray head? How am I supposed to tell the difference.  This bird seems to have a yellowish lore. Isn't that supposed to be on the Savannah not the Swamp. Discounting those differences,  this little Swamp Sparrow does have the black line behind the eye, a gray eyebrow, brownish/gray cheeks, slight black malar, white throat, gray wash breast and rusty back and buffy sides. These are all key to IDing this bird. 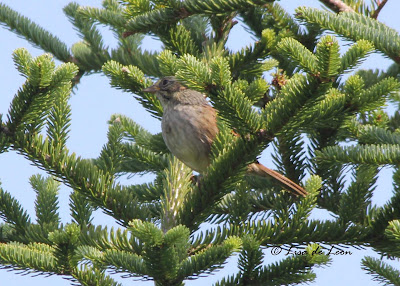 Not every bird will step out in the light in full view to help me with the identification either. Some hide away and I have to use what I can see to try to determine the species. This bird has the black malar, white throat, gray wash breast, buffy side and rusty back and tail. Hmmm...must be a Swamp. Note the little smudge on the breast. Some guides mention this as another feature of this bird. 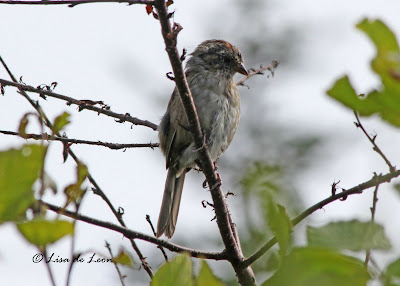 Then there are the total aberrations. This is a very good example. It does not look like a Swamp Sparrow so I had to run my checklist on features that I can pick out: 1) Reddish crown on the head 2) Gray wash on the breast and 3) A hint of buff color on the side of the breast. 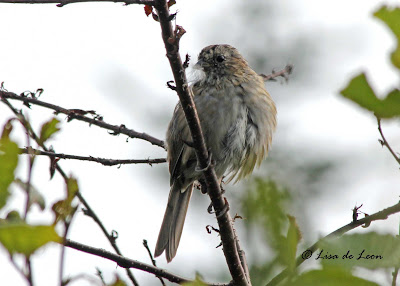 There is no distinct malar, white throat, no black line behind the eye and what's up with the seemingly forked tail. Taking just the three features that I could confirm, I sorted through the books and no other bird has these exact markings. 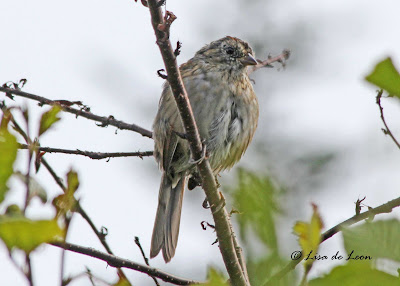 I drew the tenuous conclusion that this was a Swamp Sparrow but doubting myself, I sent the pictures to someone who would surely know. I got confirmation that it is a Swamp Sparrow and likely an adult because a juvenile doesn't yet have the reddish cap. So what happened to all of the other standard facial and  throat  plumage?  Who knows but this really illustrates that this identification thing is a skill that will evolve over time with experience and lots of reading and looking. That's why I take so many field trips. There is no better way to learn than to get out there and see the differences. 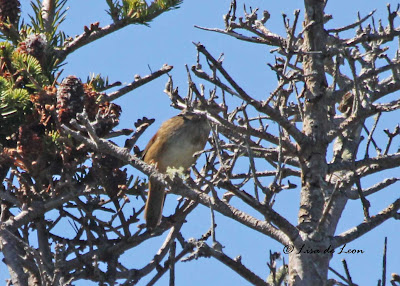 Now this little bird also posed some challenges but not so much as the one above. I see: 1) Smudge on breast 2) Buffy sides 3) Rusty wing and 4) Grayish breast.

(I'm sure there will come a time when I can spot and identify a Swamp Sparrow in the moment. Sometimes I can do that now but other times it requires more "looking.") 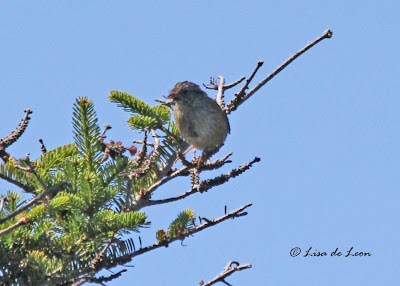 The bird then popped out in the open and I got a better look. I am now able to see a faint line behind the eye and a grayish/white throat. When I combine these descriptors to the ones above, it turns out that the only bird it can be is a Swamp Sparrow.

As if identifying the standard plumage of birds in breeding plumage, winter plumage, female, male, juvenile and adult plumage, there are still the unusual variables that come into play. It is also relevant to mention that the Swamp Sparrow undergoes two adult molts per year. 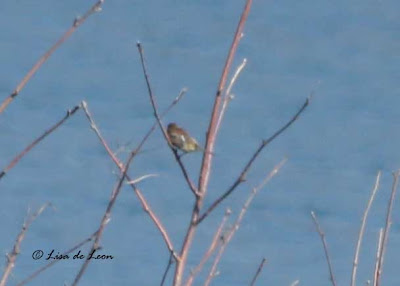 Now, here's a challenge! I have added this last picture to this post because I have been trying to go through different checklists to identify this little bird but so far, I have come up with nothing. I have no idea what it is. The bird was at least 1000 yards away from me when I saw it and I was sure that it looked different but this is the only not-so-blurry shot that I got. Any ideas?
Posted by Lisa de Leon at 8:33 PM