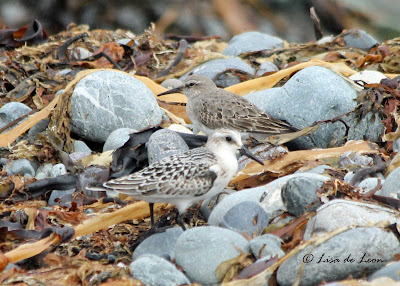 Although I recently posted pictures of a White-rumped Sandpiper, I decided to go there again.  Without repeating myself, I ended up with some better pictures and on this day, I could finally identify this little shorebird without difficulty. I think I can say that I will know this bird when I see it again. I included this picture of both a White-rumped and a Sanderling for size comparison.  Both of these birds are from 7 to 8 inches long, about an inch longer than a Semipalmated Sandpiper. 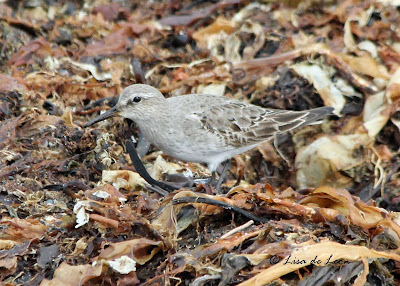 When we arrived at Bear Cove Lookout last weekend, there was a family having a picnic on the beach. First thought was there wouldn't be any shorebirds nearby because of this.  Nevertheless, my birding partner  encouraged me to go have a look.  We did and we found the beach crawling with little birds. Among all of the others, including the Sanderling posted yesterday, there was only one White-rumped Sandpiper. It stayed pretty much to itself and looked quite different from all the rest. 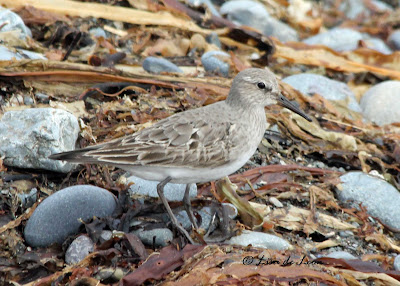 This bird had more gray than the other little birds on the beach and its behaviour was much more calm.  Although, I know that the beak has a slight down turn, that is very difficult to see when looking at the bird through binoculars. A review of pictures and a close look at the beak serves as a confirmation of this species. Because there were so many new species to learn, I was really depending on my pictures for later identification.  Gradually, I am moving into a zone where I can ID the bird on the spot. That is progress! 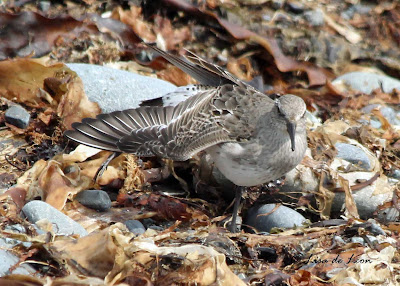 There seems to be a general commonality among shorebirds, aside from the fact that they frequent the shore, of course. Most all have stunning wing patterns visible when they are in flight. It is always a surprise for me to see all of the colors, patterns and the sheer size of the wings when these birds lift off.

It is the peak of shorebird season here now as the birds are migrating from their breeding summer ranges to their non-breeding winter ranges. A scan of most any beach will yield some little birds.
Posted by Lisa de Leon at 7:41 AM