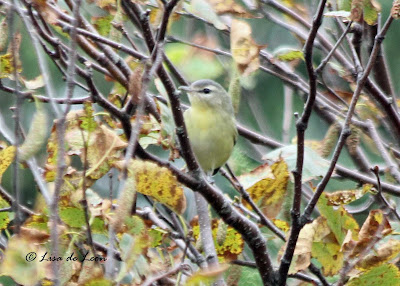 It is a real treat to see a vireo. I certainly didn't expect to see three species of vireos this year. With a bit of luck last year I happened upon a White-eyed Vireo which is quite rare here, and I really thought that would be it for me with vireos. However, this year turned out to be a vireo year.

On Saturday another birder and I decided to make a trip to the southern shore as far as Renews. We used the entire day and I don't know how the time went so quickly. Our ultimate destination was Bear Cove Point Road. 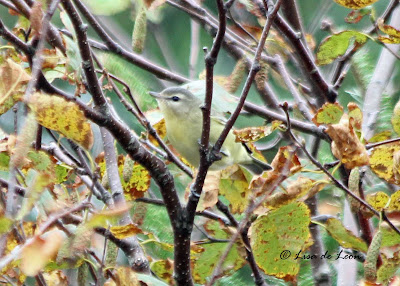 We had seen several great little birds prior to arriving a Point Road so we were really primed to see some more. We headed into the road and drove the whole distance to the light house and did not see one bird, not even a robin. Ugh! This did not look very promising. 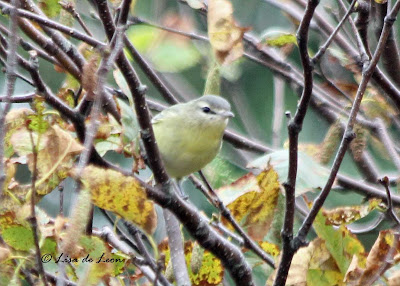 On our way out we stopped very often and began to do some "pishing."   Little by little some birds began to show up. We saw many Yellow-rumped Warblers (very common at this time), several White-throated Sparrows, a Fox Sparrows, a Northern Flicker, a raptor (probably a Sharp-shinned Hawk) and alas, a little yellow and gray bird - a Philadelphia Vireo. 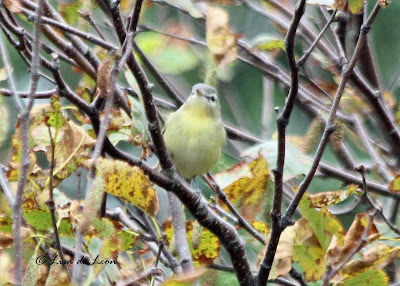 There had been several reports that there were sightings of a Philadelphia Vireo on this road and there it was. We found it and re-found it three time. Try as I did, I just couldn't get a good picture of it. I had been adjusting the settings on my camera all day to deal with the variable lighting conditions all day and I was not "set" for any of the opportunities. 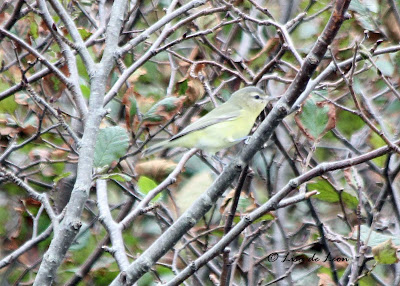 Nevertheless, I am happy to have gotten the record shots and really enjoyed pursueing this bird.

Newfoundland falls within the breeding range of this bird but I had not seen one ever before in my last two years of searching the woods high and low. Where do they stay all of the time?

This Philadelphia Vireo was flipping about at around eye level and below staying in the alders. Sometimes it was near the road and sometimes it was about ten feet from the edge of the road.  As I moved to get closer it would move up the road always keeping a distance of about 20 to 30 feet ahead of me. It didn't seem spooked but just liked to have its distance.

Other than this little bird, we did not find any of the other rarities that had been reported on this road. In all likelihood we arrived too late (just after noon) to catch the great action. It is a real challenge to drive straight to Renews without stopping in to check out so many good birding spots along the way.

In reality a day of birding is so relaxing and exciting all at the same time that is really is okay to not see any special or new bird. When that does happen it is off the charts!
Posted by Lisa de Leon at 7:33 AM