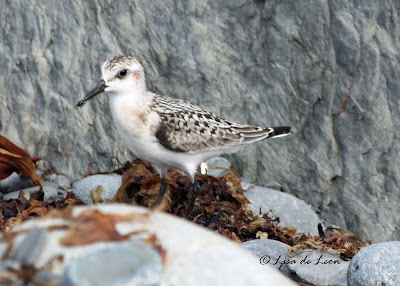 Up until last week I had thought of the Sanderling as a somewhat little non-descript shorebird that was just as confusing to identify as the "peeps."  That thought went out the window when another birder and I got a really good look at a lot of Sanderlings on Bear Cove Beach along the Southern Shore drive. 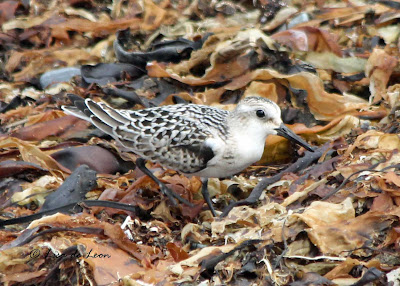 It was comical because among all of the other shorebirds, we didn't see the Sanderling for about ten minutes or more. Then one very smart looking black and white bird popped up in the distance. It had a very white chest and the markings on the back seemed black and white. What's up with that black shoulder? We thought, "Is this a new bird?  What do we have here?" 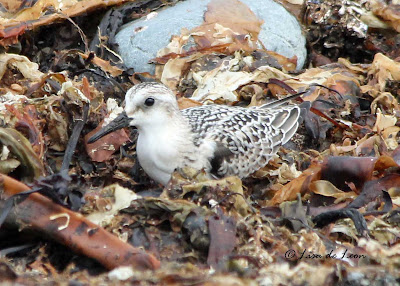 While we were giving this little bird the real "once over," up popped two more, then five more, then ten more....they were everywhere. There went the thought that they might be unusual. They were common, very common but what were they?  As good luck would have it, a top-notch birder from St. John's just appeared on the beach much like that first quiet Sanderling did. 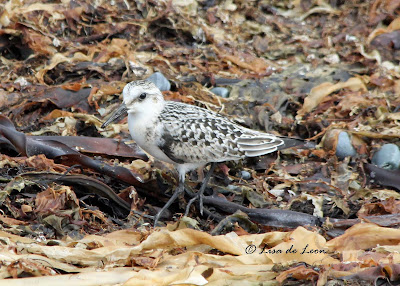 In a heartbeat he told us these were winter plumage Sanderlings. So, back to the books for me to study the difference between breeding plumage, juvenile and winter plumage for the Sanderlings. It is a never-ending pursuit of info to grow in this pass time. This is my second summer of birding and this year, I have learned so much more than last. 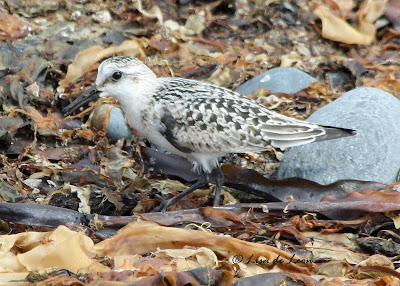 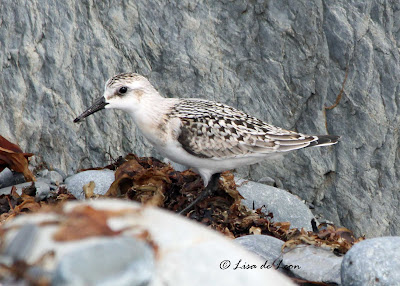 Now, the real challenge:  Which of these birds is adult and which is juvenile? Are they all the same?  Well, the difference is that the juvenile has more flecks on its back. Who's to say which is more or less? The bird showing in the second picture seems to have more flecking on its back than the others, BUT...they all have some flecks while the pictures in the book suggest a more consistently gray colored back on the adult.  If I had to lay odds on it, it would stick with a safe bet of six bits and GUESS that all of these are juvenile:(
Posted by Lisa de Leon at 4:29 PM