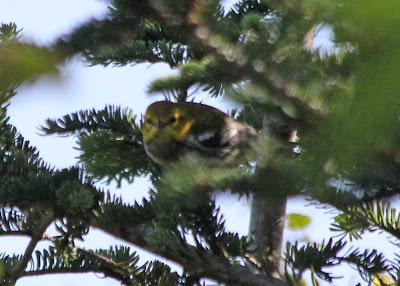 Finally, I saw a Black-throated Green Warbler this year. In fact there were three! While I had been anticipating an opportunity to get a good picture of this lovely bird, that didn't happen. The truth of the matter is this wasn't even the highlight of the day.

Another birder and I had checked out Goulds earlier in the morning to see if anything might be stirring there. Not much was moving at all. 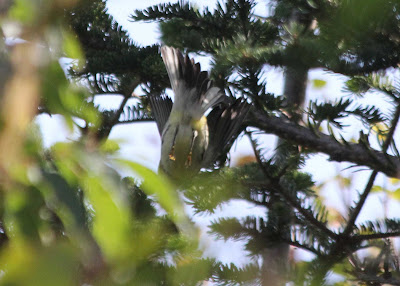 It must have been around 10:30 when we headed to Cape Spear. I pulled off the road at the top of the hill and right away we saw a branch on an alder flutter. A sure sign that a little bird was jumping about. I stopped the car and up jumped a different little bird.  What was it?  I had no idea.  It sat on a branch less than three feet from the passenger window and was too close for a picture.  I eased my way out of the car and watched as it dropped back down into the alders. No picture. 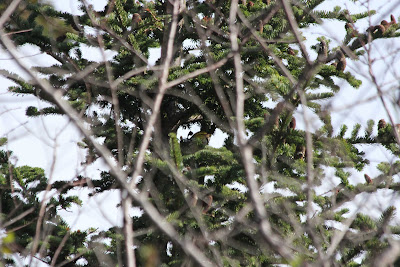 With all senses peaked, we watched as it moved about well hidden among the branches and then disappeared.  Another birder and I were creeping up and down the area to try to see where it went. We were in the process of trying to relocate the bird when yet another birder drove up and said that two other birders just had a Black-throated Blue in this area. What?  Black-throated Blue....what does that look like. The gentleman pulled out his guide and showed us a picture. 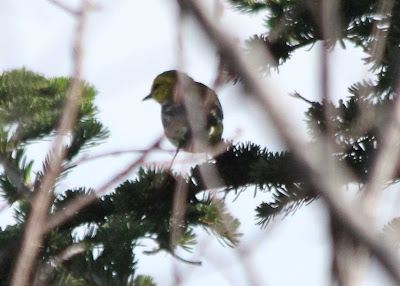 It was the bird we just saw!  Wow! I never thought that bird could show up here. We continued trying to find the bird but we kept turning up Black-throated Green Warblers.  They stayed masked by the branches and leaves but we kept working to try to get one out in the open. 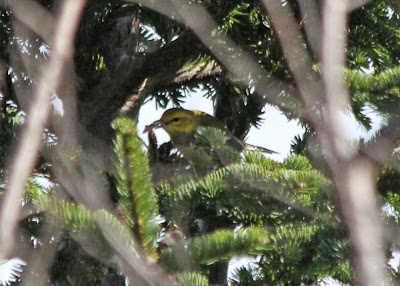 All the while we were watching for the other small bird. We walked a span of about 80 yards and things had died down a bit. We returned to the car and started looking at pictures in the guide when my friend birder heard a chip.  There is was again not far away. We got out and were able to see the BT Blue Warbler again but never in enough clearing to get a picture...not one. I have this thing about not wanting to say that I saw a bird unless I have a picture to back it up but this case was different. I am sure that is what we saw. I went back yesterday morning before the rain to try to relocate the bird but had no luck. My highlight of yesterday was getting another look at a Red-eyed Vireo. I will keep trying. 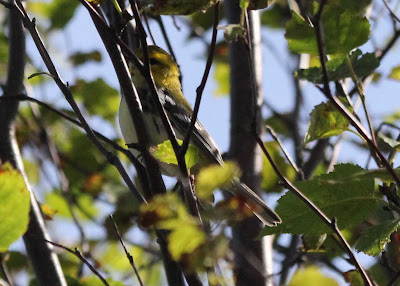 This last picture was the best shot that I was able to get of the "Green."  It was sitting in a tree very close to the road and not bothered by us watching. I thought for sure I would eventually get a decent picture of this one but that was not to be. Three roaring motorcycles came flying by and one even backfired right in front of us. The bird bolted into the woods and the opp was gone.  I had to leave because of a commitment and basically left with my camera empty but not the experience. It is always a joy to have an opportunity to watch and learn and if lucky, get some pictures.
Posted by Lisa de Leon at 7:06 AM