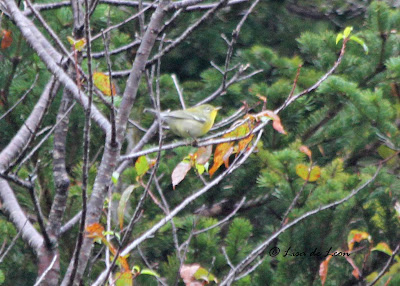 I have been seeing so many new birds lately that I can hardly keep up with my pictures, the information and my desire to get out birding while the birds and weather have been equally as good.

On a day-trip to Renews and back yesterday we had a great day. After two days of very few birds moving around, they seemed to have found their wings yesterday.  We made several stops on the way to Renews and one of the most special stop was at La Manche. It is there where I found this Northern Parula (a first for me.) 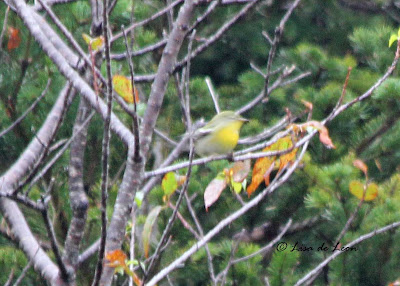 When we first arrive in La Manche we were inundated with Hermit Thrushes. Contrary to my reading, these birds were not shy. They sat nearby and totally entertained us. I will share more about them at a later post.

I then began to work my way up the road as the flock of thrushes and sparrows moved along. I came across a very busy area of birds fairly high on a hillside. I watched and was sure that there were many warblers among all of the busy birds but I couldn't get a good look at any of them.

Then out popped this little bird with a bright yellow breast. It stayed all of ten seconds and I got only two shots before it was gone. Why did it go?  Well, just as everything was getting good, along came a huge, loud oil truck bounding down the gravel road. Everything scattered. I waited a while and walked on with the plan to return to this spot.  On the way back birds were beginning to move in again. (I got two very interesting pictures of another bird, parts only, that are being reviewed now in the hopes of making an ID.)

I am sure that I would have been able to get more shots, but the oil truck was now lumbering up the road again on its way out. It is so hard when you are on the edge of something good and circumstances arise that change everything. This pretty well marked the end of the birding on this road for this day. It is a very promising area and it took a lot of self-discipline not to drive back down this morning to check out these birds again. Perhaps later in the week when the wind dies down, I may make a short trip.

The Northern Parula is an uncommon visitor to Newfoundland but is most likely found annually during migration. I recall that one was found in Goulds in May of last year and another was reported on the Cape Spear Road just this week.
Posted by Lisa de Leon at 9:39 AM