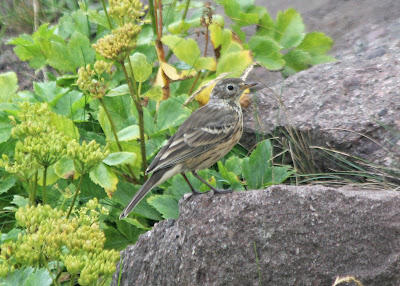 No, this is not a sparrow, but it was one of only two birds I could identify at Cape Spear with some surety - an American Pipit. 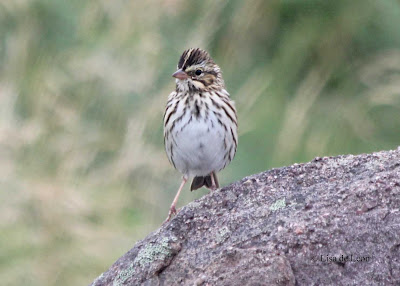 The other one was this text-book Savannah Sparrow. In the spring this species often has a yellowish supercilliary which helps with a quick ID.  In the fall, it can closely resemble a song sparrow. 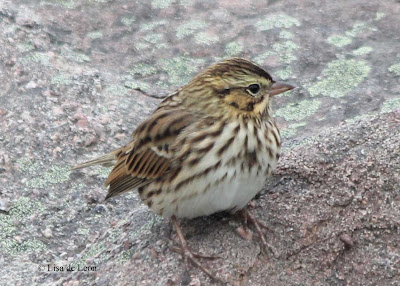 Then, come the immatures...that's when the confusion begins.  All of a sudden, the coloring is different, typical field marks are blurred, and so too is my ability to identify them. This young one more closely resembles the adult Savannah above. 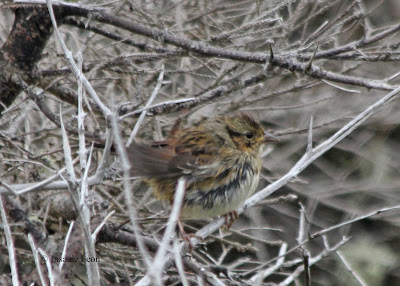 Then, there is this one. There is no defined streaking on the breast. Instead, there seems to be a lot of black on the edges of the breast. How could this bird evolve into a Savannah? Beats me! Why is this immature so different from the one above? Beats me! 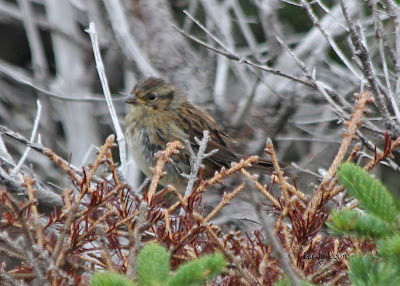 This is the first time I have seen a Savannah so marked. It was an overcast day, but not raining. Colors were not the result of the bird being wet. It seems late in the season for this to be a really young fledgling. (Images taken on August 20th) This one has more of a brownish hue than the one below. 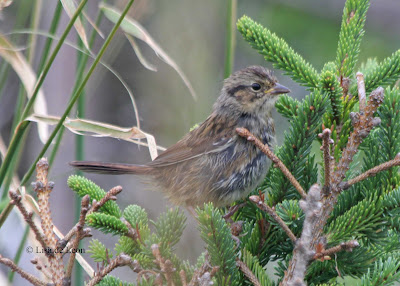 There were at least two little sparrows looking like this.  I followed the second one and got very close before a troop of walkers came down the trail.  This one seems more gray than the one above. Initially, I thought, "No trouble to master the sparrows of Newfoundland. After all, there are only about five regulars." Well, let's see five regulars times two for gender equals ten birds. Then, there is the spring and winter plumage. Hum, that equals twenty variations. Then there are the juveniles that undergo a series of changes prior to reaching maturity. Without all of those immature versions, there are now a minimum of thirty different plumage that I must learn...all in order to identify only five different types of sparrows that I frequently see.

When I see a sparrow, I am never quick to say what it is. I lock the binoculars on it tight and begin a mental checklist in the hopes of arriving at the right identification.  Actually, it is much easier in Spring than in Fall.

One advantage of not being sure of myself around the identification of sparrows is that it does cause me to look closely, and who knows - I may just spot an uncommon visitor, especially at this time of the year.﻿
Posted by Lisa de Leon at 7:39 AM