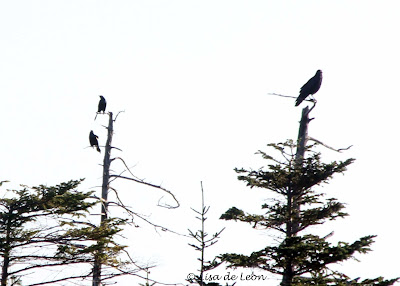 Typically, I see grackles and just post the sighting on the group site, NL Birds, unless I get a close-up shot. On this day, Thursday, I watched five Green-winged Teal fly from one part of Virginia Lake to another. Wondering if there might be something else in the same area, I worked my way around the lake's edge.  Two Belted Kingfishers zipped across the lake, chattering all the way; an Osprey sat in a tree with its 2 lb. trout, slowly devouring its breakfast, and these two Common Grackles sat in a far, very far, tree. I deemed them grackles by their size and shape, despite the fact that one of them had a very narrow tail.  I just figured it was the lighting or angle of view. 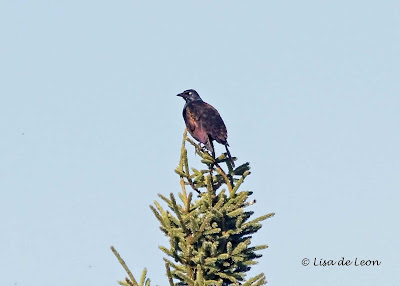 While I watched the feeding Osprey, the two black birds flew right in front of me. No time to get a shot as they were so fast.  When I headed back on the trail, I caught sight of this bird sitting atop a distant tree. It was distant but not nearly so far as the first view. 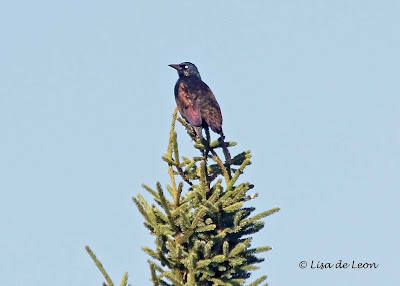 After snapping and viewing a few pictures more closely, I began to doubt myself. Was this really a Common Grackle? Its head shape and coloring, as well as the beak, were right for a grackle, but what about the body color and that strange narrow tail. 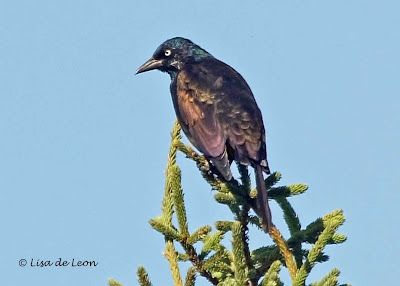 I was fascinated. I watched and managed to move in a little closer to try to get better pictures to study. Of course, images on the small camera screen don't always provide enough detail.  The body looked really rusty and the pink/purple on the wing was not distinct. What was clear was the odd tail? 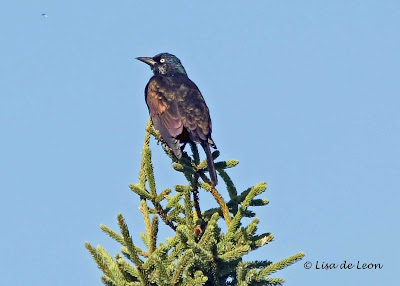 Thinking that this may not be a Common Grackle, I gave Dave a call and described my find.  Without hesitation, he said "It sounds like a Grackle." Well, that made sense, after all, it was with another very normal looking grackle. 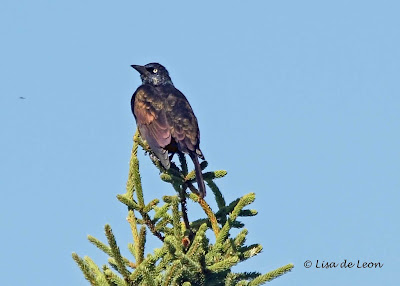 Having looked at a number of images on the net, I gather this is an immature grackle. However, I couldn't find any shots of a similar bird with a really narrow tail. Anyway, it certainly served as an impetus to study this species a little more.