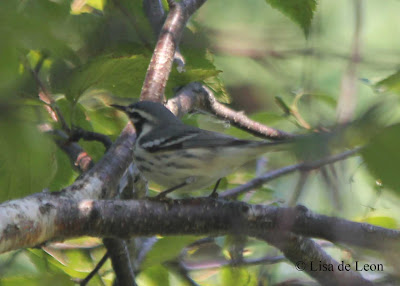 Over the summer, I have visited so many of the "hot spots" in St. John's looking for something special. Time after time, I came up empty-handed. In fact, not only have no unusual or rare birds recently shown up in St. John's, but the Southern Shore has not had much to offer either.  The few desirable birds disappeared before I could get to them. Suffice it to say, I have had a long, dry spell of not seeing a new Newfoundland bird for quite some time. 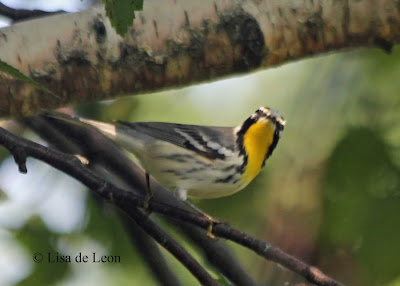 Yesterday, after an unfruitful drive to Cape Spear, I decided to drop in on Virginia Lake to see if anything new had moved in there. I was greeted with some small bird activity including Yellow Warblers, Yellow-rumped and Blackpolls, along with a few Black-capped Chickadees. Then, I saw a bird that looked like a Mourning Warbler. I shot a couple of pictures and then got my binoculars on it.  I was surprised by the amount of eye-ring, so I began to wonder.  I took another couple of shots before it flew away.  I decided to follow it around the trail.  I didn't see it again, but I did come upon another flock of Chickadees. I stopped and pished for a few minutes. In flew a small bird unlike the others.  My first glimpse was like the first picture.  It looked blue/gray. I didn't know what it was, but I knew it was different. 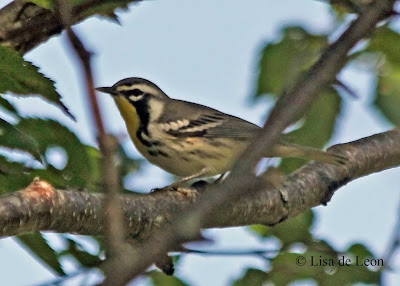 Then, it turned around and flashed that brilliant yellow throat at me. I was 90% sure it was a Yellow-throated Warbler.  It stayed around for quite a while but was quite busy.  It moved from branch to branch and was often masked from view by the leaves and branches. Nevertheless, it seemed content to stay. I just waited for any opportunity for it to show itself, unobstructed. 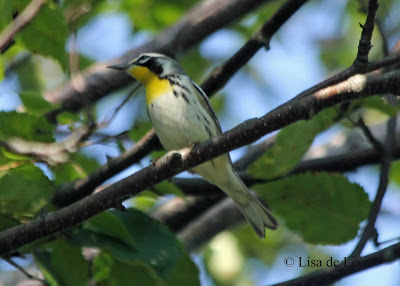 Then it popped out on a branch in the opening with a flash of sunlight on it, and I could see how bright-white the belly was. This was a beautiful bird. 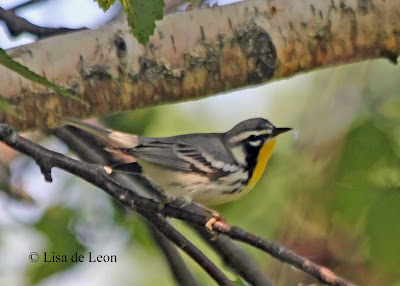 Walkers were coming and going and dogs were attacking each other, but this bird stayed put. I enjoyed every minute of it. 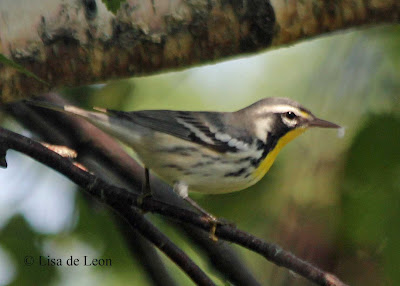 When it did fly off and I was sure it wasn't going to return, I headed straight to Anne Hughes to see if she could confirm the identity of the bird with my pictures.  Indeed, it was a Yellow-throated Warbler. I was delighted.  It was today that I learned that this sighting goes into the record books for being the earliest sighting (Aug. 28) of the Yellow-throated recorded in Newfoundland.  I understand the previous early date was September 5 on Bear Cove Point Road. 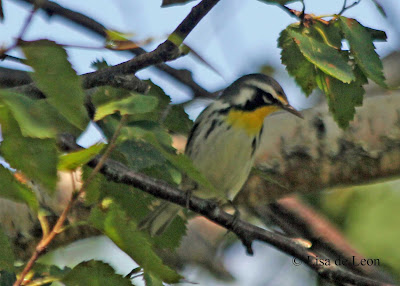 This morning on the way home from an errand, I stopped into the area again to see if I might be twice-lucky.  There was minimal bird activity when I got there. However, I did see one little bird, looking quite gray, flit across the trail. It flew out of the low brush, crossed the trail, and quickly disappeared in the low brush on the opposite side. I could not see it again. The behaviour was quite sparrow-like, but the color was not. I wonder if that behaviour is also typical of a Yellow-throated Warbler. ﻿
Posted by Lisa de Leon at 12:46 PM