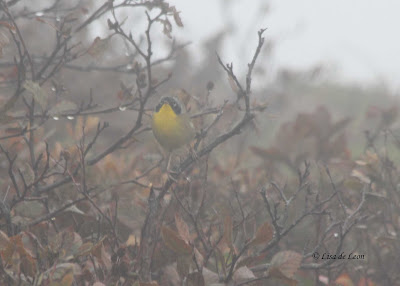 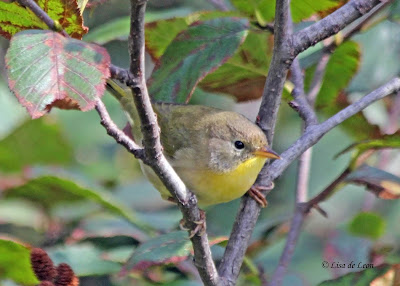 With low winds and fog hanging very heavy yesterday,  I decided to take on the East Coast Trail beyond the Cape Spear Lighthouses. After all, the fog should burn off in an hour or so. Not this day! The fog lingered and surrounded me, soaking me and my camera. Undaunted, I continued with a big diffuser shrouding everything in the area. My persistence paid off. Not that I saw many or any unusual birds on the trail, but the ones I did see turned out to be special, like the great little male Common Yellowthroat. 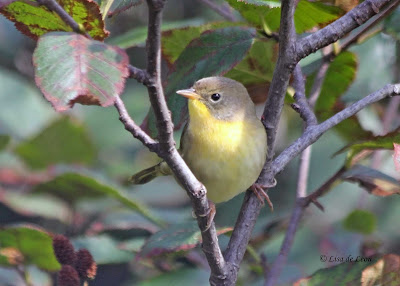 Throughout this warbler season, I have seen at least ten female Common Yellowthroat from Cape Spear to Renews. It is always exciting to see this little bird with the brilliant yellow throat. There is also an interesting challenge involved in getting it to show itself among the leaves and branches. There is a very distinct flick of a branch when there is a small bird moving about below, regardless of how hard the wind is blowing. I can only liken it to the special bump on a fishing line when a fish is playing with the bait. In both cases, you can't see what is causing the action, but the strike is unmistakable. There is something there.  Senses go on high alert, and all of the reflexes are ready to catch that special moment with the bird appears or the fish takes hold. 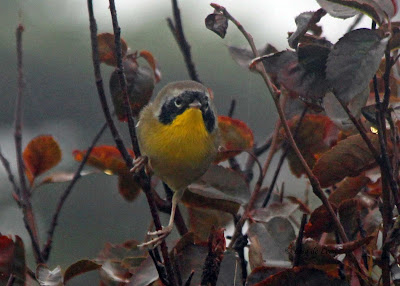 This was the case with this great little male Common Yellowthroat. It was especially easy to watch it move through the undergrowth as there wasn't a whiff of wind yesterday morning, and those branches were vibrating with activity. I wasn't quite sure what I had until it popped up and showed itself. 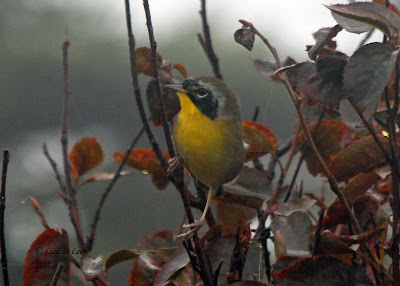 I was thrilled! Aside from getting an obstructed view of a male in Renews two years ago, I had never had a look at a male Common Yellowthroat. 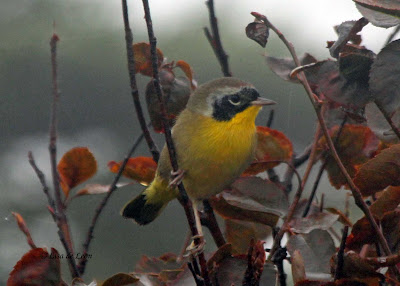 There it was, large as life, showing itself well to an admirer. These images were taken from quite a distance with the fog blurring every image.  With a little help of Photoshop, I was able to salvage a few shots to share. 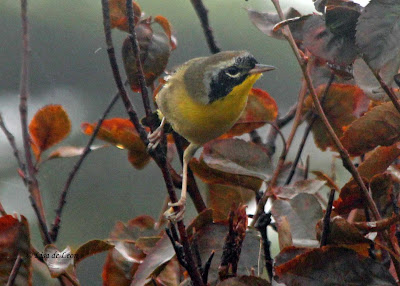 It was particularly nice along the trail yesterday, because I was there early, and no hikers had yet hit the trail. As a result, there was little disturbance in the area, and the Baltimore Oriole, Yellow-rump Warblers, many sparrows, and this Common Yellowthroat were enjoying the morning calm, as was I.﻿
Posted by Lisa de Leon at 6:59 AM