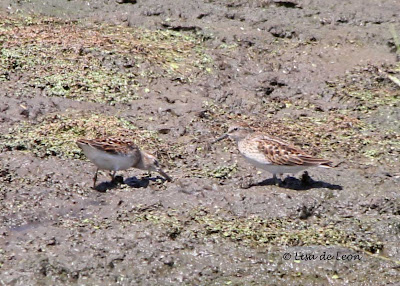 There just aren't enough hours in the day. My posts have fallen behind, my pictures are piling up, but I have been birding and squeezing other responsibilities in between. Shorebird season for us, here in St. John's, started out slowly. On July 27, I saw these two Least Sandpipers at a small pond on Ruby Line Road.  The pond pretty much evaporated during the long, dry spell we had. I got excited because I thought this was the beginning of the season. It turned out these two were way ahead of the rest. 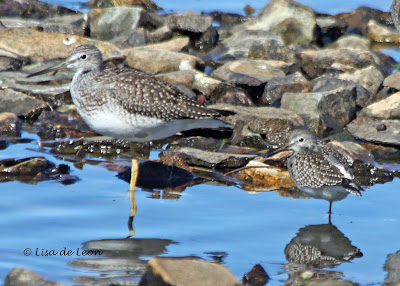 By August, the yellowlegs, both lesser and greater, arrived. There were only a few scattered around the ponds about the city. However, this year there seem to be more Lesser Yellowlegs than usual. 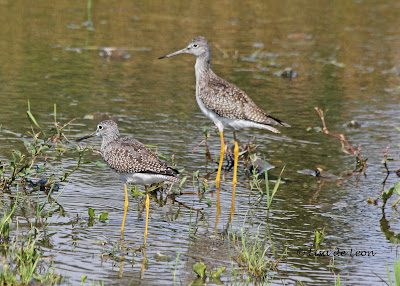 When just learning to differentiate between the Greater and the Lesser Yellowlegs, it is always helpful when the two are in close proximity to each other.  There is no mistaking the difference here. 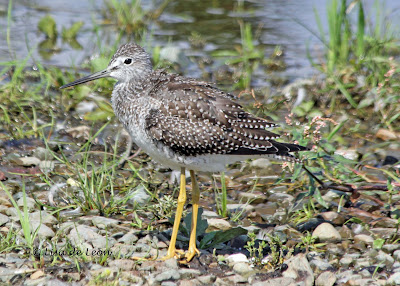 Often times, a yellowlegs may be feeding in the water with the legs partially submerged, which makes it difficult to determine how much of the legs are hidden. In the picture of this Lesser it is easy to see how short the legs really are. The bill is also considerably shorted than the Greater. 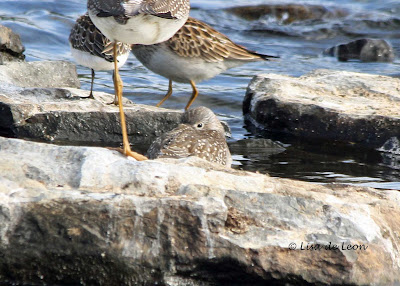 These Lessers are tricky little guys.  I didn't get a picture of the legs of this bird, and I couldn't tell how large it was.  When I saw the eye-ring, which looked so prominent, I tried to turn this lesser into a Solitary Sandpiper. 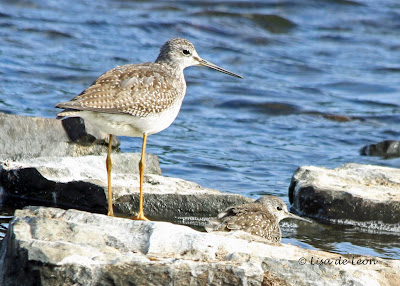 When sitting next the to Greater, this bird looked so small. Shorebird identification is not easy. 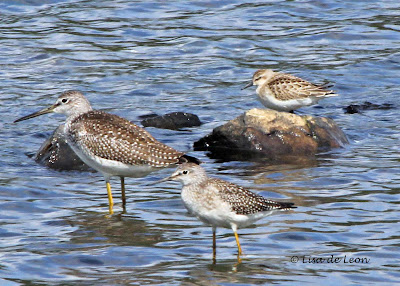 It was on September 1st that I found a Semipalmated Sandpiper sitting on a Rock at Forest Pond. Of course, there were several yellowlegs all around. 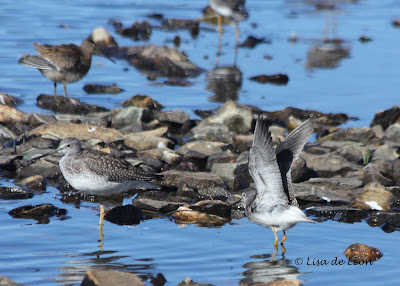 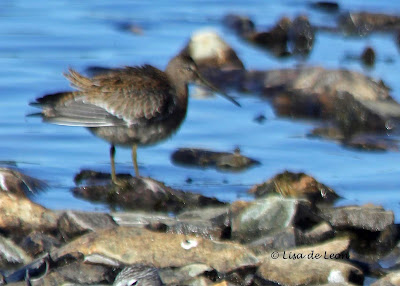 On September 2, there was a report of a Short-billed Dowitcher at Kenny's Pond. I went over to check it out. There were between two and three dozen yellowlegs making a real racket. I was standing taking pictures of the Lesser and watching its behaviour.  Several walkers were interested in these noisy birds. Typically, I don't talk to people who are just passing by, but some showed great interest. I loaned my binoculars and talked with them a while. In the meantime, I shot a few pictures of the Lesser as it raised its wings.

What a surprise I had today when I flipped through the pictures and found the Short-billed Dowitcher standing in the background of several pictures taken while I was talking! Lesson learned! Pay attention! I didn't have a single shot focused on this bird, because I didn't see it.

Well, this is just the beginning of several reports on shorebirds. Some great things have been happening this week, and I will post pictures.

While the season seemed to chug along like a slug in the beginning, action has sped up.
Posted by Lisa de Leon at 1:36 PM