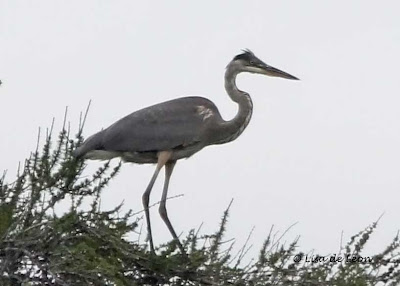 Coming from Arkansas and spending a lot of time on the river fishing, I have seen a number of Great Blue Herons. Yet, every time one appeared, I would stop and watch. A nimble, agile bird of this size is definitely a show-stopper. 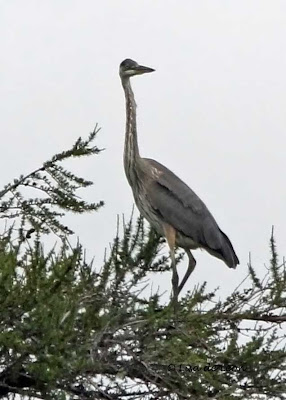 When a Great Blue Heron was reported to be at Renews Beach, I wondered if I would see it or not. Well, I decided on the spur of the moment not to let the opportunity pass me by.  I got in the car Sunday and headed South. 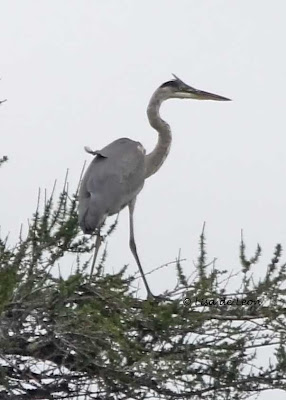 Resisting the many temptations to linger along the route, I arrived at Renews by late morning.  When I stopped at the look-out, a fisherman from the area pulled in to the area and asked me if I was birdwatching. Of course, I was pretty conspicuous with my binoculars and camera hanging on me.  He told me there was a tall bird on the beach and urged me to get in my car and follow him. I told him that was the bird I had come to see, and I quickly followed. 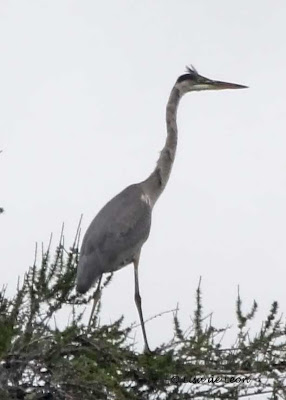 He led me to the boat basin between the lookout and the beach. We got out and started to walk around to the beach where he last saw the bird. Then, "up she comes!" The heron flew past us and up, up and away.  It finally landed atop a tree.  The gentleman who was my guide told me how much he liked birds and had initiated an effort to have "Tern Island" deemed a protected area because the children were taking the eggs.  He also has feeders in his yard. He showed a great deal of interest and was very eager to help me see this bird. Once again, he told me to get in the car, and he would lead me closer to the area where the bird was perched. 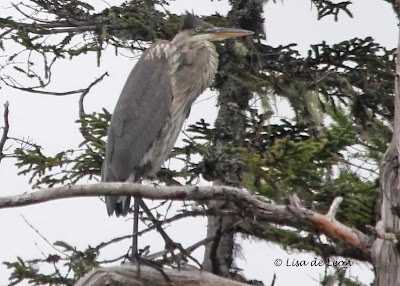 If I were left on my own, I don't know if I would have thought to look in the trees and may well have missed the bird. It seemed so strange to me to see this southern bird standing tall atop an evergreen in Newfoundland. 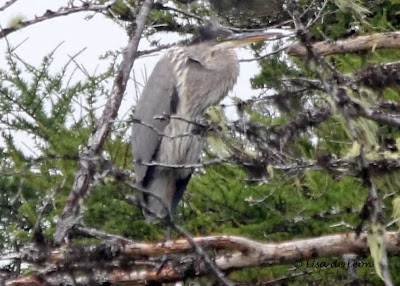 We drove around to the paved road that edges the side of the lookout, and there was the heron sitting and preening in the tree. It was not possible to get close to the bird, but given the size, I saw it quite well with my binoculars.

Is it any wonder that so many great birds drop into Renews?  They are so well received there.  Oh yes, the man told me there were TWO very tall white birds that stayed for two days last week. Where are they now?﻿
Posted by Lisa de Leon at 7:50 AM