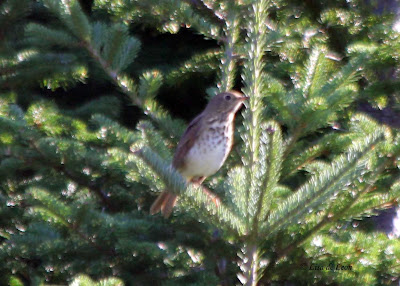 Having had a really good look at a Northern Mockingbird yesterday, I felt pretty good.  After all, I had chased one through much of the winter without luck. On my way home from Cape Spear, I darted into Blackhead one more time.  Seeing a little junco activity, I got out to have a look.  In flew two birds, one was this Hermit Thrush. Note the reddish tones, especially on the tail. 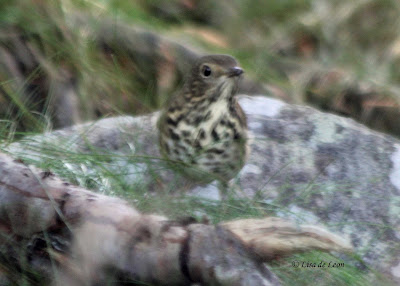 Curious about what the other bird was, I watched intently for it to show itself. Then, I heard a flute-like whistle that I had never heard before.  I really perked up. What was that? I watched for movement and listened as the call went on. 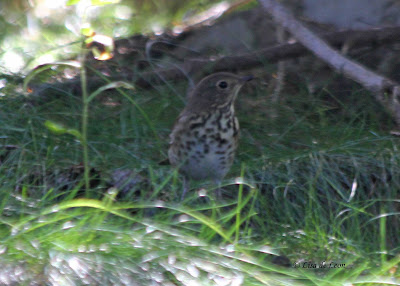 Suddenly, both birds burst out from the cover of the trees. One flew into another tree and this one headed for a shady, covered area.  It was there that I got a look at it.  It was not a Hermit.  There was more a rich brown and creamy color about this bird. The eye ring was cream colored, as was the breast. There was a larger patch in front of the eye and on the lower cheek. 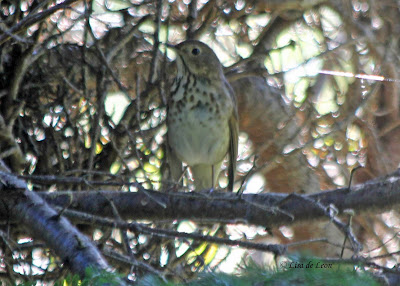 This bird wasn't flicking its tail. While I didn't see this bird call, the sound I heard surely came from this bird. There was no time to waste looking it up at the moment. I watched and grabbed every moment to try to get pictures. 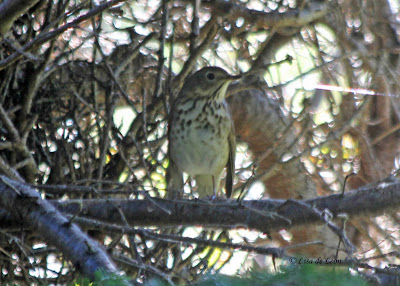 I had only seen one Swainson's Thrush and that was two years ago, and it only stayed around long enough for me to get two pictures. This was shaping up to be a better opportunity than before. 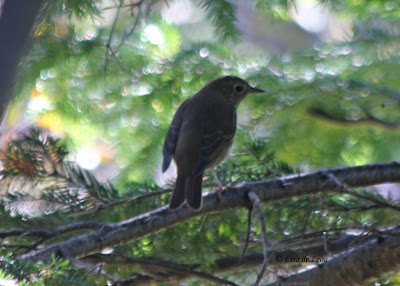 When the session with this bird ended, I began my research right there in the bus turnaround.  The pictures looked good for a Swainson's but the clincher was when I listened to the call of this species. This was surely a Swainson's. While this bird is considered a common breeder here, it is seldom seen or, at least, reported on the Avalon.﻿
Posted by Lisa de Leon at 7:03 AM