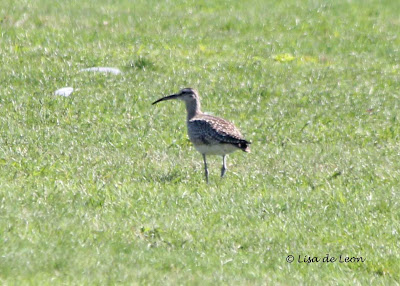 Well, Wednesday was going to be a non-birding day for me. After all, I had been out four days in a row. There comes a time when I must finish up some work in the yard. All that changed when I got a call from Catherine Barrett telling me there had just been a Hudsonian Godwit spotted at Forest Pond, but it had flown off.  What could I do? I searched for this species all last year and was unable to see one. I had to go. Before I could get ready and get out the door, Catherine called again.  On her way to work, she spotted this Whimbrel feeding in a ball field in the middle of town.  That was a first! 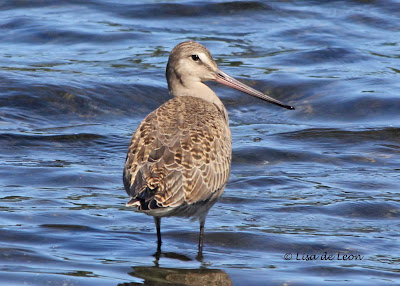 Making a quick detour through town, I was able to see the Whimbrel. It is amazing that she spotted it. It was clearly a small speck in a large field.  When I arrived, it was in the field some distance away. I took a couple of pictures from the car, because I didn't want to flush the bird. I was thinking other birders would like to enjoy the sight. 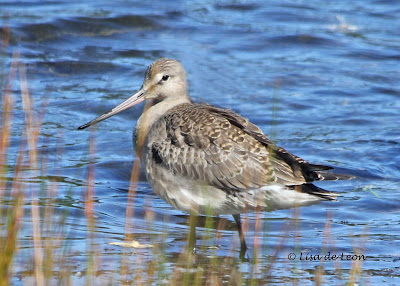 I didn't stay too long, because I thought I might have to hunt for the Hudsonian Godwit. I headed straight for Forest Pond.  When I arrived, Alison Mews and Ed Hayden were just unloading Ed's scope to set up for a look at the Pectoral Sandpipers. They hadn't seen the post on the web site and were delighted with the thought of seeing a Hudsonian Godwit, too. 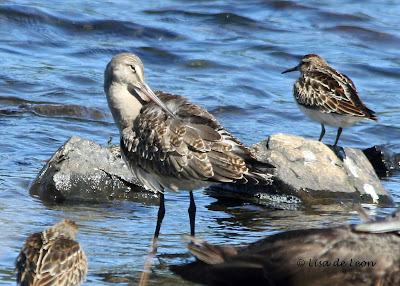 We were not disappointed. There is was, large as life, calmly  preening and feeding. The H. Godwit breeds in northern Canada and Alaska and migrates to South America by way of the Atlantic coast. This usually means several of them end up in Newfoundland for a short while before moving onward toward their destination. This is not a bird I get to see often. Two years ago one stopped off and fed in one of the fields in Goulds for a week or so, but I was unable to get close enough to really appreciate the beauty of the bird. 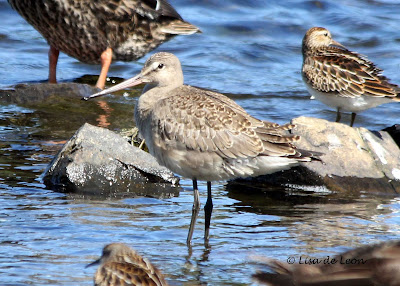 This viewing was a close encounter, for sure.  The Godwit is a beautiful bird and clearly is clearly identifiable by the long up-turned, pink bill with a black tip. 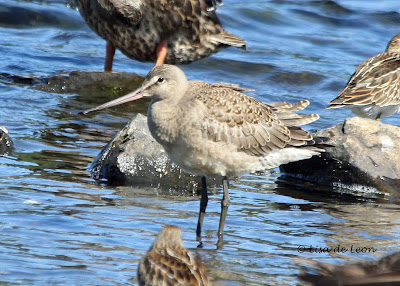 The feathers on this bird are so fine that it actually looks air-brushed. Its pale buff brown and gray winter molt has a slight pinkish hue, especially when seen next to the dark brown Pectoral Sandpipers. Its legs are blue-gray in color. 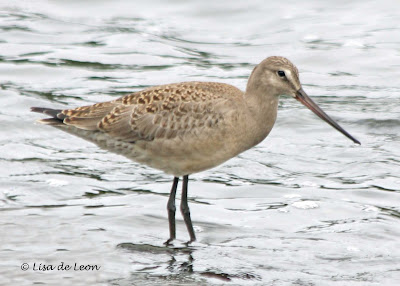 On the following day, I went, once again, to Forest Pond where overcast skies shed a different light on this bird. It appeared rested, eating well and comfortable with on-lookers standing quietly at a safe distance. I stayed quite a while looking and admiring, because it could be a long time again before I get a chance to see one of these. 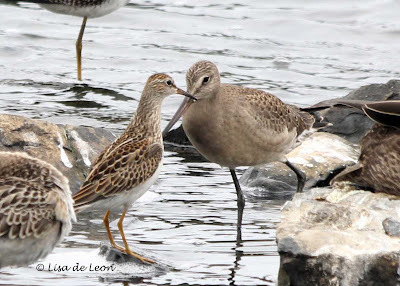 Quiet observation often times provides an opportunity to see nature at its best.  The Hudsonian Godwit, who actually is quite clumsy when moving around in the water, attempted to move past the Pectoral Sandpipers. This little Pec stood up as tall as he could and attempted to cut the Godwit off at the pass. Unfazed, the Godwit went right on about his business. This was an unexpected, amazing opportunity to study the Godwit and other shorebirds gathered in a small area.