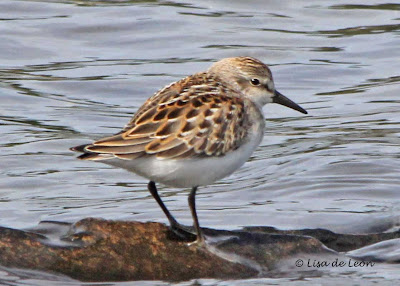 Where did I see this bird?  Well, Forest Pond, of course - the best place to see sandpipers around St. John's this year. Well, with all of the rarieties showing up in that area this year, I thought I should look at this semi a little more closely on the off-chance that it might be a Western Sandpiper. 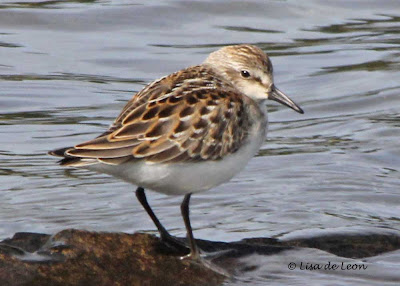 While Western Sandpipers are rare, occuring less than annualy in Newfoundland (according to Jared Clarke's record site), they do occur. If so, will I be able to tell the difference.  The size and coloring of the Semi and the Western are so similar that I decided to focus on the bill and the feet to make the ID.  The bill of the semi is shorter, more stocky and straighter than the longer, more tapered, decurved bill of the Western. Sometimes these small differences are really difficult to discern in the field, which is why I take plenty of pictures. Having studied my pictures and the field guides, I think if a Western appeared before me now, I just might be able to identify it. 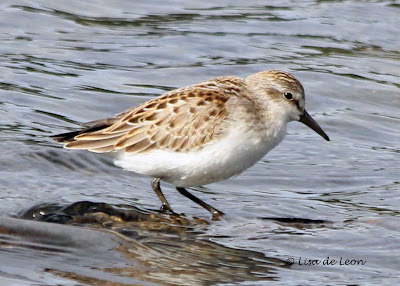 Using color to make an ID is pretty imprecise. This shot and the above shots are all of the same bird, just with different camera settings.  It looks much paler in this shot and much grayer in the shot below. 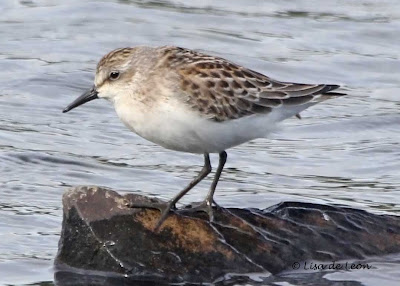 To confirm 100% that this is a semi, I got a good look at the feet. It is easy to see the slight webbing at the join of the toes. No rarity on this day.

However, who knows what is waiting out there today!  Leslie blew through here yesterday with winds gusting near 140km at the airport.  Dave Brown tried to check Cape Spear, but the much higher winds in that area basically locked him in the car. Interestingly, Dave suggested because this storm remained at sea, without touching the mainland, there may not be too many rarieties dropping in as a result. However, who knows, the Bahamas may have been teeming with birds who jumped to get ahead of the slow-moving storm.

For us, the storm blew through in a flash, lashing us with winds for about six hours and was gone again. I must get out today to see if it brought us any surprises. I can try to salvage my uprooted Popular later in the day.
﻿
Posted by Lisa de Leon at 6:17 AM