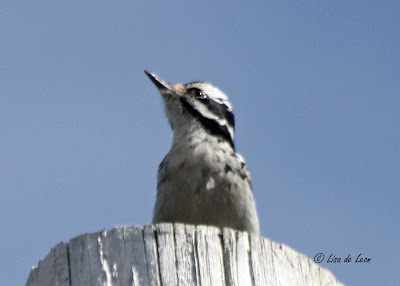 My experience with Hairy Woodpeckers is quite limited. On April 18, I took a drive to Cape Spear, Petty Harbour and Goulds. My first stroke of luck happened in the community of Blackhead at the playground. 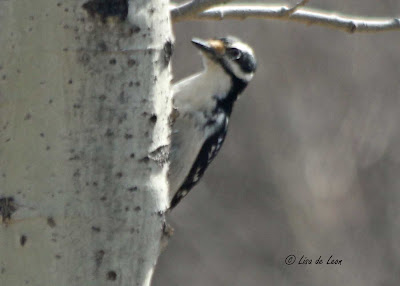 There were two ladies standing inside the fence at the playground snapping some pictures of small birds.  I parked on the opposite side of the road and eased my way into the area.  They were watching juncos and said they heard something different but couldn't find it. I was standing near the light post at the entrance to the playground, when all of a sudden a female Hairy Woodpecker burst out of the woods and landed on the other side of the post. 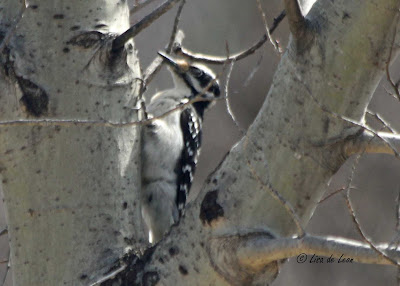 Wow! She worked her way up the dark side of the post and then popped up on top of the post. This was so unexpected.  The other two birders moved next to me in the hopes that the bird would move into the favorable light. 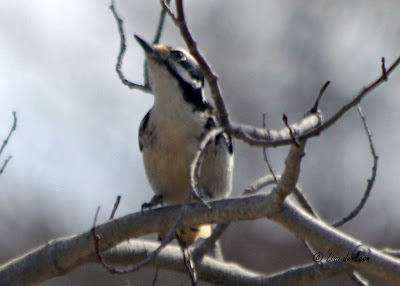 Then all of a sudden, it flew toward us, taking a sharp turn to end up in a tree on the opposite side of the road. It was inside the fenced yard of the nearby house. In amazement at the close proximity of the bird and its behaviour, we watched and took a few pictures.  It remained in the tree for about five minutes before it moved on. As I said, I don't know much about this species, but I couldn't help but wonder if it were setting up a nest in the area and was defending it by flying towards us. It may be a good area to watch for further woodpecker activity. 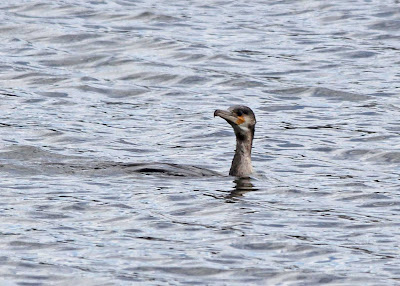 Toward the end of my morning of birding, I shot this picture of an ugly Double-crested Cormorant.  Given its yet undeveloped markings and grayish color, I think that this is an immature bird.  There were two bobbing and diving around Forest Pond.  On the same day, I saw five cormorants sitting on the distant rocks with the seagulls at Second Pond. When I checked Fourth Pond, there was nothing around except yet another cormorant sitting at the distant point of land. I have often seen large groups of Great Cormorants nesting along the coastline, but I have never seen so many cormorant grouped together or nearby in fresh water areas. I checked the area the next day, and the large group in Second Pond were gone. Why were there so many, I wonder.﻿
Posted by Lisa de Leon at 9:06 AM