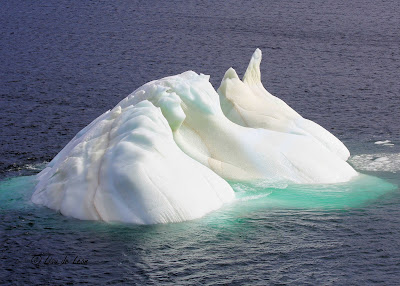 It is no wonder the winds blowing in off the water are very cold these days. Pack ice (frozen sea water) surrounds us. For more than a week now, the crusty layer of sea ice has been undulating just off shore. Pack ice is free floating and is driven by the wind. It comes in close and moves off far from shore.

These large ice floes often transport arctic wildlife to our shores. Within the last week, two polar bears have landed and posed danger in small communities in Newfoundland. In one case, the bear broke through a patio door of a home and appeared in the kitchen before it was driven away. Along with pack ice and polar bears, come many warnings for people to survive these natural encounters. One:  Stay off the ice as it can break apart and drift quickly out to sea; and two: Don't look the bear in the eye, move away by backing away, don't run, and the list goes on and on. 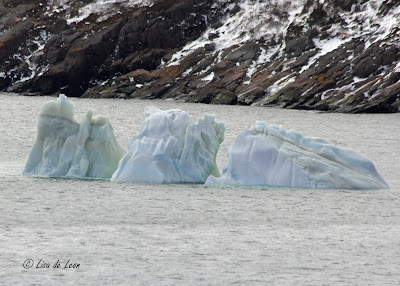 Aside from the dangers associated with the ice at this time of year, there is the beauty of the ice bergs that are drifting inshore. We haven't had any really big ones show up yet, but www.icebergfinder.com is reporting five bergs from Biscayan Bay to Maddox Cove. This pictures that I have included here are of a small berg in Maddox Cove. Shot from three  angles, this berg looks different from every perspective. 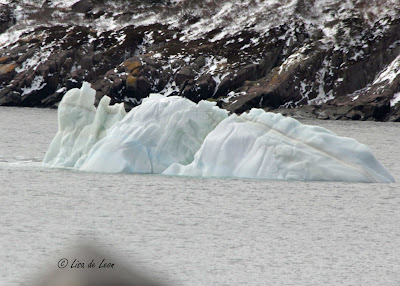 It seems early for the bergs to arrive in April; then again, nature is not easy to predict.  For the last two years, there were none to be seen around the St. John's area while they were extremely plentiful around the Northern Peninsula. Last year over 75 bergs (broken away from the Petermann Glacier) created a tourism dream-come-true just off shore from St. Anthony.

Many years ago, I recall attending a conference in St. John's in June and ice bergs surrounded the area. Does this early arrival mean that we won't have any later?  Who knows?  It is almost always a wait-and-see situation when it comes to nature.

How is all of this affecting the birds?  Well, it seems that the sea birds are coming closer to shore to enjoy the open waters inside the pack ice.  Hopefully, this will create more opportunities to get better looks at birds typically seen from afar.  At the moment there is a large flock of Long-tailed Ducks sitting off the point at Cape Spear and plenty of Black Guillemots, but I am still awaiting the arrival of a large flock of eider. One flock of Common Eider (with one King Eider) was reported more than a week ago, but it didn't stay very long.  Clearly, there is an increase in movement and variety of sea birds flitting both north and south. It is all about being in the right place and the right time to see them.
Posted by Lisa de Leon at 5:57 AM