The American Coots are Lingering 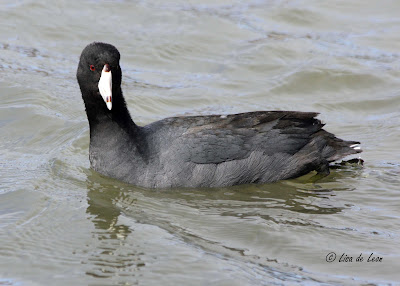 During the winter of 2011-12, we had as many as nine American Coot clustering together at Mundy Pond. Jared Clarke suggested that this may well be a record number. The range map for this species shows them to stay in the mid-section to western part of the U.S. and Canada and to winter in South America. What is it that brings a group of these birds to us year after year?  For three years (my entire lifetime of birding) there have been American Coot in the open ponds of St. John's. 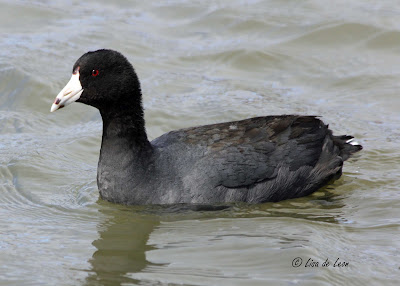 This is such an interesting bird to watch. It propels itself with a thrust of its chicken-like feet and a pumping motion of its head. It stays around dabbling and diving ducks and will often walk around the shoreline. The three coots remaining at Mundy Pond seem to have grown accustomed to being fed by walkers.  When I arrived, they actually swam toward me. The American Coot tends to stay around the edges of the shoreline by nature. 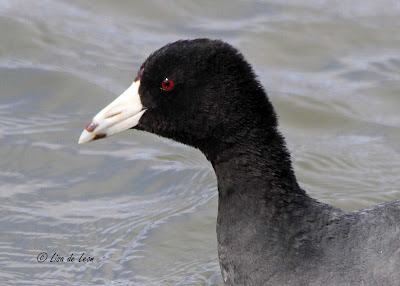 While watching and photographing these birds, I began to wonder if they looked any different now than they do in January. I noticed that the red/brown frontal shield marking and a marking at the base of the bill seemed to be darker.  I wondered if there might be a different between male and female features but found that both genders have the same markings. 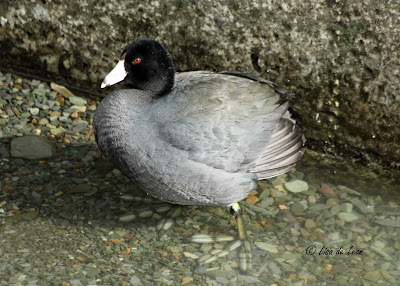 I went back through my pictures from last year and found this shot taken in January. Nope, this bird looks very much like the ones that I saw this week. While reading about this bird, I found a few images of baby coots.  They are so bright and different from the adult.  Wouldn't we be lucky if the three lingering coots would decide to breed here!

Click on the picture to enlarge images.﻿
Posted by Lisa de Leon at 7:36 AM