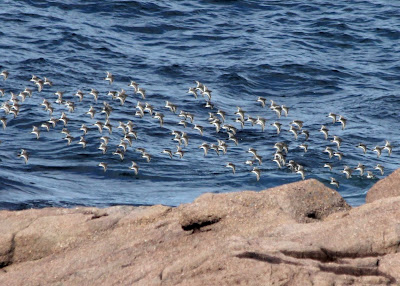 Cape Spear is one of the most spectacular locations near St. John's. Aside from being a great tourist attractions as it is the most Northeast land mass in North America, it is often teaming with natural wonders. 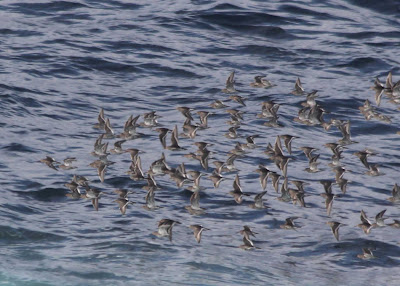 Each season delights with spectacular displays including ice floes, bergs, whales and birds - lots of birds. On March 28, I counted over 130 Purple Sandpipers in one picture. These little shorebirds are regular winter visitors to Cape Spear, but there is nothing commonplace about the beautiful aerial show they put on, creating a wave of dips and bends all the while painting fleeting, lofty images as they fly by, turn, and fly by again. 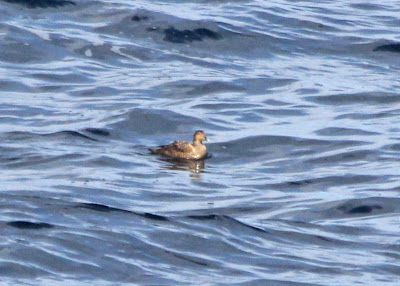 Some days the waters off Cape Spear are alive with activity and on other days, there is nothing but the bone-chilling wind blowing on shore. On this particular day, it was relatively warm and there was a full show of sea birds bobbing on the waves,  diving into the deep blue, and skirting over the water in breeding displays.

There were many Black Guillemots, Long-tailed Ducks, a mixed scoter group and this one female Common Eider.  This eider caught the light and looked quite yellowish as it steadily swam from North to South and rounded the point.


Everyday, Cape Spear treats with something different and often special. The waters are often dotted with fishing boats and large vessels. Beyond birders, there is always a steady flow of people who just want to sit and look seaward for no other reason than to drink in the rugged beauty of the entrance way to the harbour of St. John's. ﻿
Posted by Lisa de Leon at 7:17 AM