Fooled me once; fooled me twice! 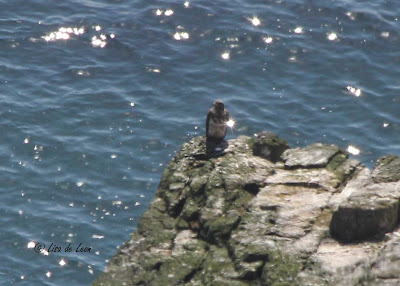 On our walk out from Cape St. Mary's last Saturday, a quick scan of the rocks along the shore yielded not one, but two white breasted, large raptors. Poor lighting and distance hampered getting a clear look through the binos and failed to yield any detail, despite walking around and attempting to see the birds better from several angles. 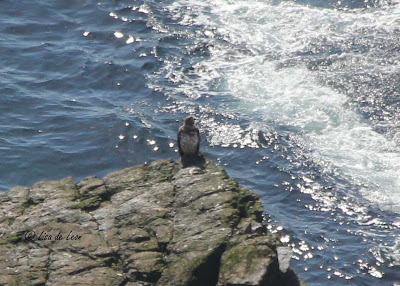 Pictures taken clearly showed the large bird with a reddish, brown band below the neck and a white breast. It was impossible to see any detail of the head and beak from the teeny, tiny pictures in my camera. 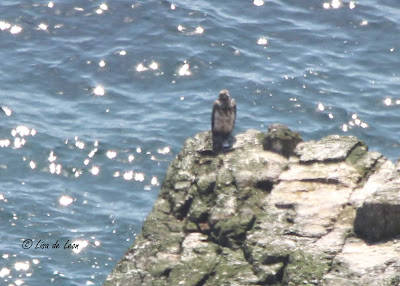 When we returned to the car, we quickly check the field guide and there was only one large raptor with a white belly - it was a Swainson's Hawk, a rare bird for our area. It was troublesome that there were two as rare birds don't usually travel in pairs. Now, this was a puzzle. What was this bird?

I strained the see the pictures but just couldn't make them any bigger in the small 3' X 2"  LCD screen. At last, we came upon another group of birders who we could ask. In 1 second flat, Chris Brown said they were juvenile Bald Eagles. What? How can that be? I have never seen any eagle or pictures of such an eagle. 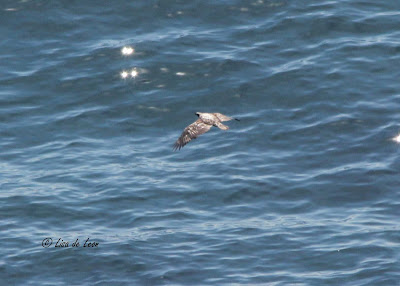 Even when the bird flew away, it showed quite a bit of white on its back. Well, it took me quite a while searching for details about the white-breasted juvenile eagle. At last, I found one web site that said this oddity does exist in some juveniles.

On that day, I added several new birds to my year list, but most importantly, I learned of yet another unexpected spin on a very familiar bird. I must have seen at least 50 Bald Eagles since the new year, two with white breast.﻿
Posted by Lisa de Leon at 7:45 AM