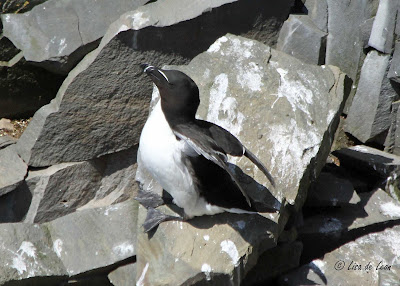 A trip to Cape St. Mary's is quite a long drive from St. John's, especially when you stop to look at everything that flies or sits on the water. This year marks my third trip to the spectacular and rugged breeding grounds of murres, kittiwakes and Northern Gannets. There is nothing to compare!  While Witless Bay offers a nearby opportunity to see the murres and kittiwakes, there are no gannets. Nevertheless, it, too, is an amazing place to view the breeding habits of sea birds and often an up-close view of whales. Wonders such as this are all around us.  Cape Spear during late July and August of last year provided an astonishing view of  hundreds of whales surrounded by puffins and murres sitting on the waters. 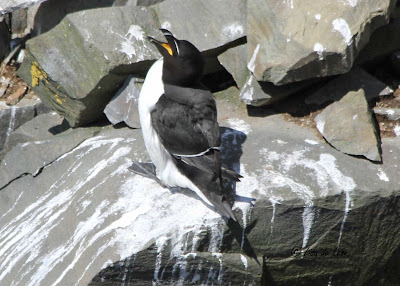 At Cape St. Mary's there were thousands of murres - Common, Thick-billed and Razorbills. When gazing at the waters, there is a carpet of murres - so thick that it looks like you could walk on them. How in the world do you determine which species is which?  Only a scope can provide a real means of separating the Razorbills from the Common. Scoping a Razorbill out of the thousands of sitting, diving, skipping and flying murres is no easy task. 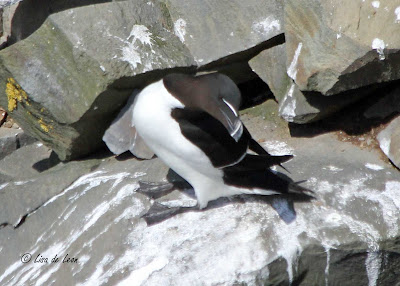 Using a scope is a real skill!  The scope has a very narrow field of view, and I am always impressed how skilled users can quickly scan an area and come up with the different birds among the masses. It is, perhaps, my impatience and lack of skill that binds me to my binoculars.  Scoping requires knowledge, patience and skill and the end results certainly yield the best looks at distant birds. My appreciation is extended to the many who use scopes and share the opportunity to see the bird well. 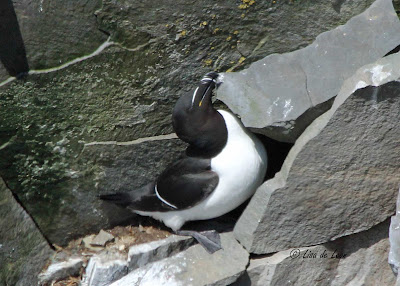 Last Saturday there were thousands and thousands of murres on the water but none on the rocks...until a single Razorbill just popped up on a nearby cliff. It was followed by another. 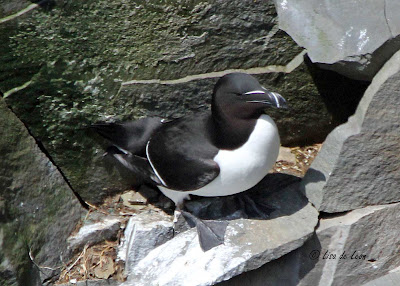 The two checked out the area and seemed to be talking about whether it was the best place for them. When one flew off, the other remained to lay claim to this small, prized piece of real estate. (The goal is to find a safe spot where the eggs will not roll off the ledge.) This happened several times until they finally lifted off not to return. 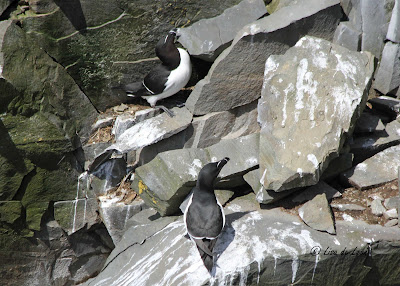 These two birds provided the best opportunity to get a really close look at this beautiful, velvet black Razorbill.  The thin white lines on its beak and and lines running to its eyes popped against the black background. The white lines from the beak to the eye are a part of its breeding plumage. 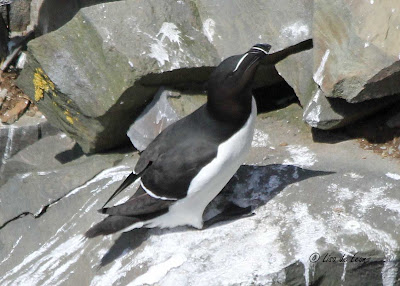 They seemed undisturbed by the presence of about nine people and lots of cameras snapping. Of course, the amount of activity swirling around the rocks and the cacophony  of bird sounds easily drowned out everything else. 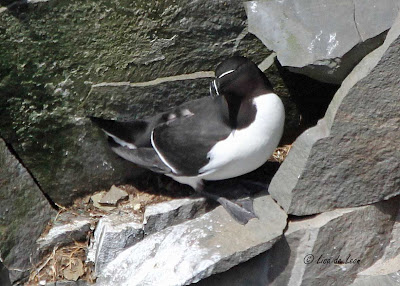 As the days go by, more of the same birds will descend upon the area covering every square inch of the ledges in this area.  Then, thousands of baby birds will emerge and grow until they are capable of leaving the nest. I read that Razorbill young cannot fly when they leave the nest so they have to have immediate access to the water.  From the cliff to the water is a pretty far drop, I can imagine all of the resistance as the parents nudge the babies out into the world.

The rocky crags of Cape St. Mary's will be teaming with activity for most of the summer, and each phase of breeding will offer a somewhat different experience for onlookers. For now, it is all about scouting and claiming the best possible spot to set up house.
Posted by Lisa de Leon at 8:01 AM