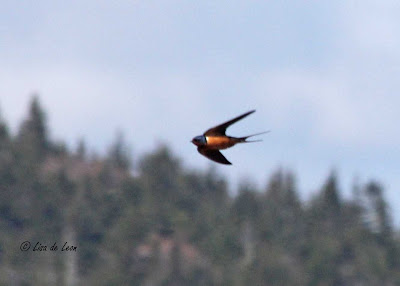 After a long, dry spell of not birding, I was delighted to join Margie McMillan for a twelve-hour trek to Cape Race last Sunday. The only bird report from the general area was a Barn Swallow at the Pig Farm Delta in Ferryland.  Not really being familiar with Ferryland, despite the many drives through it, we asked someone where the pig farm was. Off we headed up the hill to what appeared to be an abandoned pig farm. A look about yielded no birds at all. We then came upon a small barn that we thought might have pigs in it.  Again, no birds. 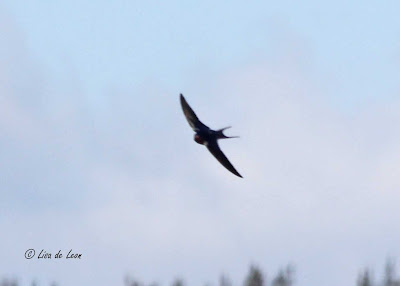 Disappointed, we headed back to the main road.  It was then that we caught sight of a small bird disappearing into the trees.  We stopped and looked for a good while.  Then....there it was! 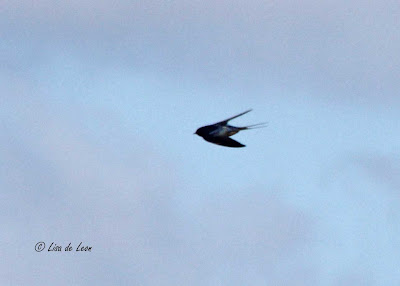 It flew up, down and all around, sometimes disappearing into the woods and out again.  At times, it seemed like there must be two birds because it appeared from a totally different place from where it was last seen. We never did see two birds at once, so it must be that this agile, gad-about was just everywhere. It never lit on anything the whole time we watched. 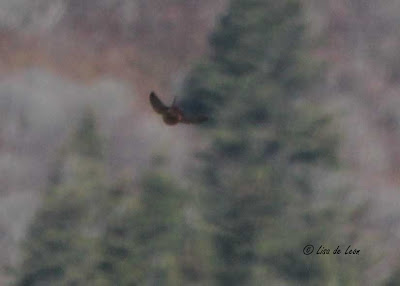 Capturing a picture of a Barn Swallow, or any swallow for that matter, is like trying to catch a falling star. It is almost impossible. Try as I did, these were the only identifiable shots that I got.

I now know that the marsh at the "Y" in Ferryland is called the Pig Farm Delta.  This seems to be a pretty good place for birds as a Great Egret stayed in this area for a while last year.


Rare birds have been very scarce this year so when a uncommon bird returns earlier than usual, it is a joy to see.﻿
Posted by Lisa de Leon at 8:16 AM