Northern Gannet: A member of the Sulidae Family 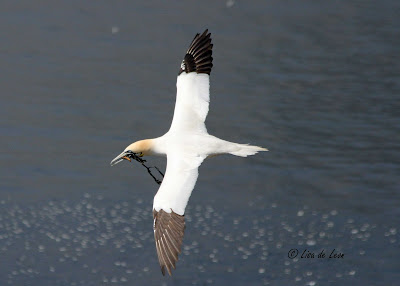 The Northern Gannet is a medium-large seabird.  While it often stays close to shore, it feeds at sea, its body is built to accommodate its dive bombing. Last summer off Cape Spear, it was a regular spectacle to see them straighted out their bodies, plunge into the water with a splash, and come up with a fish. 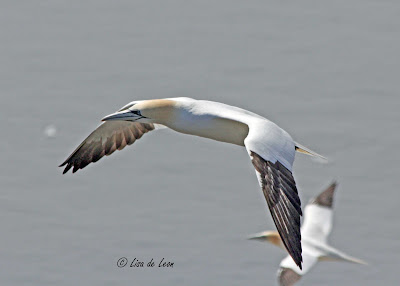 The gannet is such an interesting mix of power, poise and gentility.  It is the sleek shape and look of the bird that my pictures highlight today. 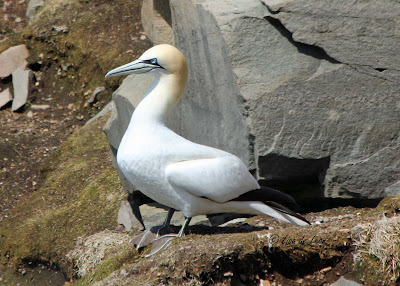 In this image the gannet's shape looks very much like the booby (sulidae) family to which it belongs. The gannet is the largest bird in this family. 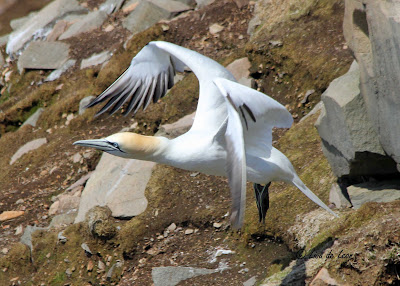 It seems to have great power in its long wings. Some can have wing spans from 4.5 to 5.5 feet. That is huge.  Not all gannets are as large as this, though.  I immediately noticed a variance in size as they flew by.  When a large one zipped by, it was phenomenal to see the size and grace. When they initially take off, they are clumsy, but by the time they are aloft, they are a picture of beauty. 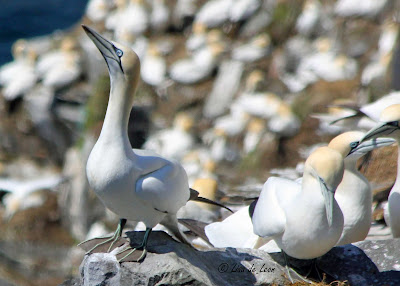 In a recent discussion about birds, we talked about how the cormorant looked somewhat haughty with its beak often tipped up.  This is the case with the Northern Gannet as well.  It often seems to strike the upward pose for the camera. 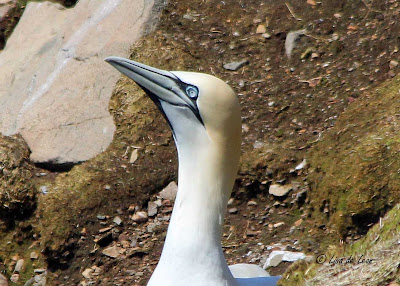 The stunning blue eye ring and facial markings as well as the lines on the beak sit in stark contrast to the white of the remainder of the body. The soft brown color on the head fades into white at the back of the neck. Their size and large black wingtips make for a quick ID when seen far from shore. 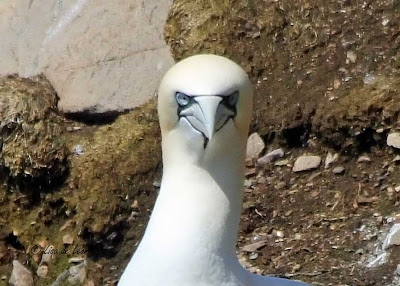 All of a sudden when the Gannet stares down the camera, it looks somewhat menacing. 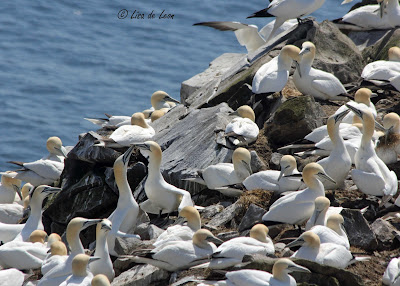 Cape St. Mary's is only one of many gannet breeding grounds. The largest colony of Gannets breed on Bonaventure Island, Quebec, but 68% of these birds breed around the coasts Great Britain and Ireland. Many Northern Gannets winter in the Gulf of Mexico where the oil spill took its toll. I don't know if it is still early in the season, but there are still many bare spots left on Bird Rock.  Maybe there are more to come.

Tomorrow, I will take a look at the courtship of the Northern Gannet.﻿
Posted by Lisa de Leon at 9:11 AM