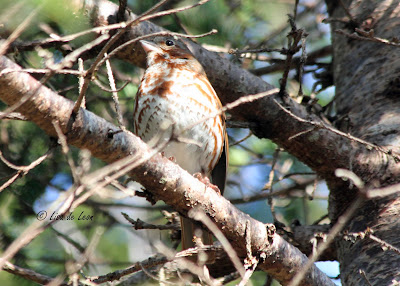 Studying the images and information about bird identify is certainly very helpful. Typically, the written identification loosely applies to all birds of the species, but when the actual birds present themselves, it then becomes a matter of filtering through the info and matching it to what sits on the branch or flies through the air. 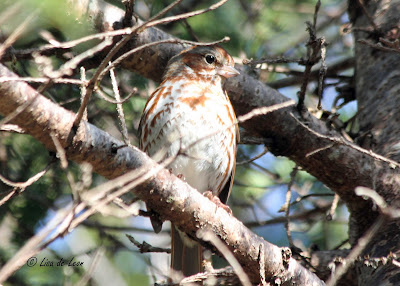 This is clearly a Fox Sparrow, no doubts and yet, its breast is much lighter than many. The rusty streaks have not fully developed.  The rufous color and gray on the face are unmistakable. 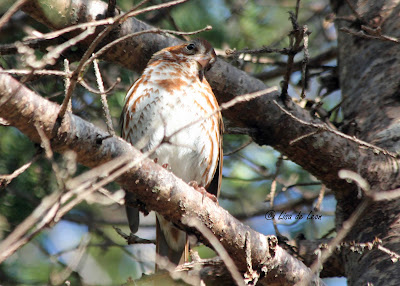 The Fox Sparrow is singing a lot already this spring and is often heard before it is seen. When a bird is singing, it tends to sit on a branch a little longer providing a better chance to listen and study it.  The song of this sparrow is described as being one or two whistles followed by a series of thrills or "churrs."  For anyone interested in challenging themselves with bird song identification, check out Alvan Buckley's blog.  He has set up several song identification quizzes. 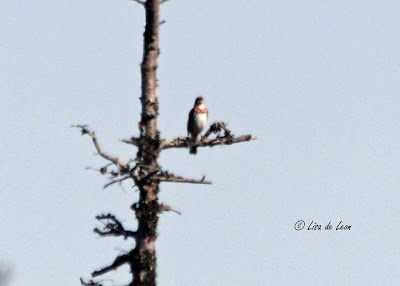 This Fox Sparrow spotted one week after the one above looks different again. There is a distinct rusty band across its breast with minimal streaking. Yet, it was the song that influenced the identification of this bird. Near or far, familiar or unfamiliar, making an ID remains a bird-by-bird adventure. ﻿ 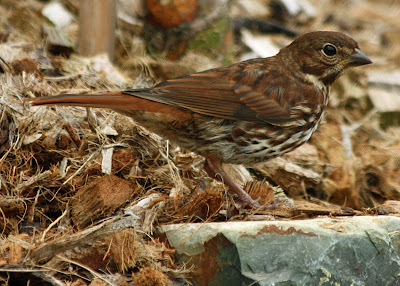 This image of a Fox Sparrow was taken last summer and shows the full-on streaking and rich colors of this species.﻿
Posted by Lisa de Leon at 8:22 AM