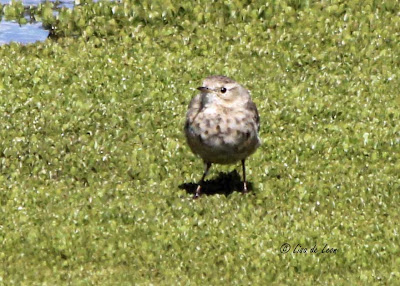 About two months ago, two other birders and I travelled up the Cape Race road to see the American Kestrel.  We were successful. However, on that day we had two other target birds, an American Pipit and a Dunlin that were frequenting the Miner's Lettuce Patch. We didn't have any luck. 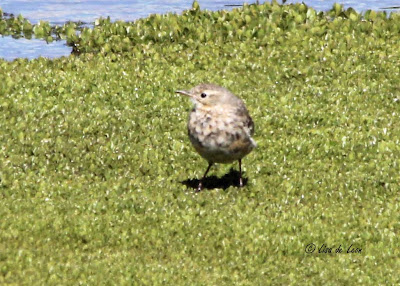 Now, I have a little confession to make. I thought that the Miner's Lettuce Patch was the garden area by a small house in The Drook and the miner was the man who owned the house. I scoured the area and the nearby beach searching for the pipit and the dunlin. No luck.  Since then, I have learned that Miner's Lettuce is the name for this green plant growing over the top of the water. There were several patches of this on the road, as we saw last Sunday on a return trip to the area.  How do I know this is the exact patch?  Well, there was an American Pipit sitting on it.

I have since read that Miner's Lettuce is actually edible. 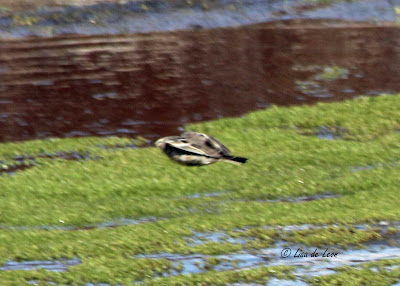 When the pipit was on the green platform, it took on the green color. It sat there quite a while until a car coming up the road caused it to take wing. In this only picture of the American Pipit in flight, it is possible to see the white outer wings which helped me with the ID. 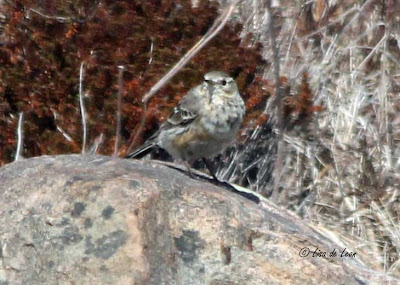 I haven't seen a pipit at this time of the year and its buff sides made me wonder if it was a pipit.  A quick reference to a field guide confirmed that it was. 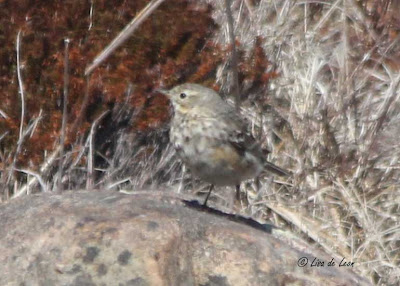 When the pipit landed on the rock, it seemed to reflect the colors around it, making it so well camouflaged that it was difficult to see. I could actually see it better with my naked eye than with my camera.  It was next to impossible to set the focal point on it. 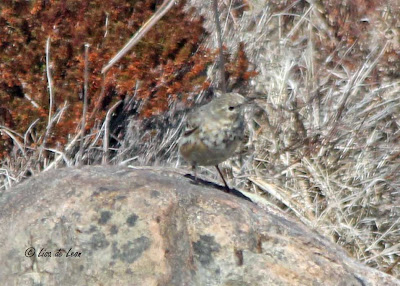 There was no sign of a mate around.  I wonder how long this little bird will stay in this area all alone. It survived most of the winter there, but I think it is now time for it to join some other pipits and do what they do in the Spring, make lots of little pipits.﻿
Posted by Lisa de Leon at 5:47 AM