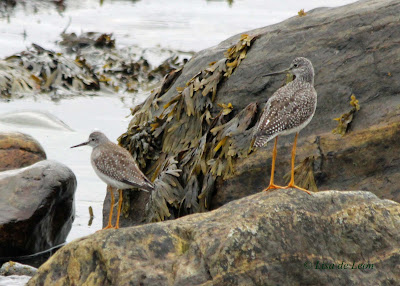 Peterson's Field Guide has several pages dedicated to confusing fall warblers, but no such page appears for all of the other confusing species. Let's see there is the Greater and Lesser Scaup, Hairy and Downy Woodpecker, lots and lots of confusing seagulls and sparrows, and then there are the Greater and Lesser Yellowlegs.  Finally, this summer I saw enough Lesser Yellowlegs to be able to distinguish them from the greater variety.

I was told that you only need to see them together to be able to see the difference. Well, that happened several times. The Lesser Yellowlegs is less common here as its breeding range is farther west but they do show up and usually hang with the Great Yellowlegs. 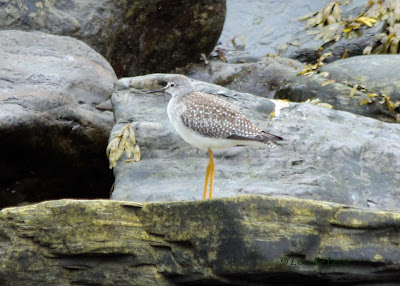 Aside from being able to differentiate between these two species when they are side-by-side, I thought that I should learn a few of the real differences so that I can identify the Lesser Yellowlegs right away, even if it is alone.  There are at least four identifiers:  1)  They are significantly smaller; 2) The length of the bill in relationship to the size of the head is significantly smaller; 3) the bill is straight and black while the Greater Yellowlegs has a bill that has a slight upturn at the base which is paler than the remainder of the bill; and 4) the leg joints are noticeably thicker.

Over the late summer I saw several Lesser Yellowlegs mingling with the greaters. These photos were taken in Mobile in an infrequently checked beach behind the Molly Bawn Ticket booth on the main road to the Southern Shore.  There were often shorebirds in this area that are worth checking out.

Well, the snow storm that was supposed to hit us this morning has been downgraded.  I got up particularly early thinking that I would have the extra time to clear my driveway.  That has changed.  There is a report that a Horned Grebe is at Quidi Vidi Lake, and I have never seen one up close so off I go to be there when day breaks. That will be much more fun than blowing snow!
Posted by Lisa de Leon at 6:55 AM