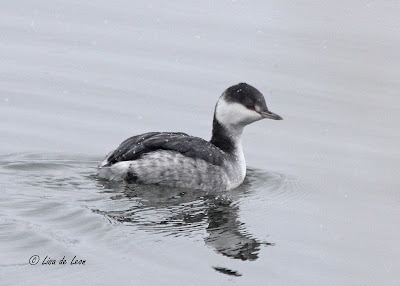 When opportunity knocks, you have to answer the call over and over until it smiles on you. I didn't do that and this is what I ended up with:(

To have a Horned Grebe just meters away in an accessible area is very unusual. Of course, as soon as I heard about it, I rushed to Quidi Vidi Lake to get my best look at this special little bird.  I did get some good looks but my camera was not as forgiving as my binoculars. 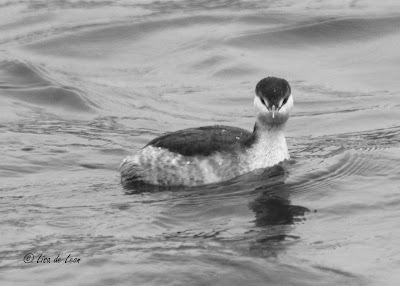 I was only able to go twice due to weather and responsibilities. On both occasion, I was "turned" by the weather.  On the first day it was a little brighter (above) but the snow was falling, more and more by the minute. I took cover and didn't make it back to lakeside for several days.

On the second try I arrived at the lake just as the wind picked up and the rain began to fall, sideways and heavily in the high winds.  It was torture, and I was drenched.  I didn't stay long! 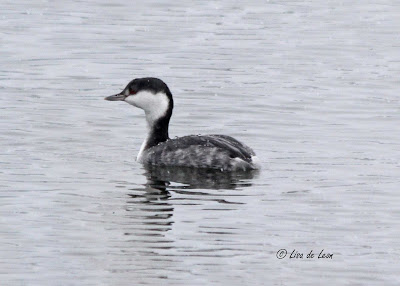 This little bird has a beautiful red eye but my pictures sure don't show it! It's as if my camera was set on gray and white while my hands were shaking in the cold! 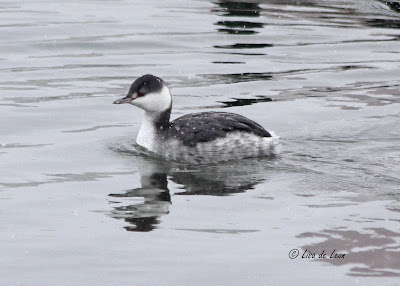 I was amazed how close the bird came to shore.  The trick to get the best looks were to wait until it dove for food and then try to move closer while it was underwater.  It didn't seem bothered by people being nearby as long as they didn't move when he could see them. 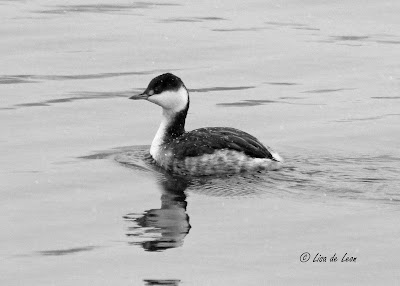 This Horned Grebe stayed for more than a week in the same area and was enjoyed my many walkers, photographers and birders who frequent this area. 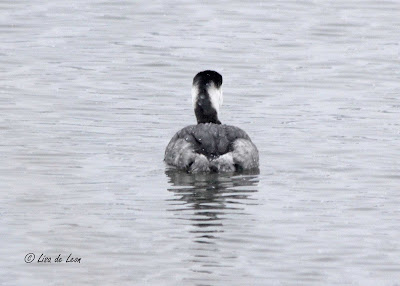 Then, as the lake began to freeze, the grebe moved on.  It was reported on Sunday that it was seen in Quidi Vidi Gut so the opportunity to get close has probably passed, and it did so without me getting one good pictures. I am really disappointed because this opportunity is not likely to knock again. 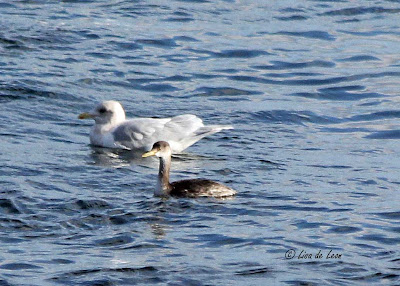 For comparison, I have added two pictures of a Red-necked Grebe that appeared in Torbay in November.  There is no mistaking these two birds. The Red-necked Grebe has a much longer neck and bill. 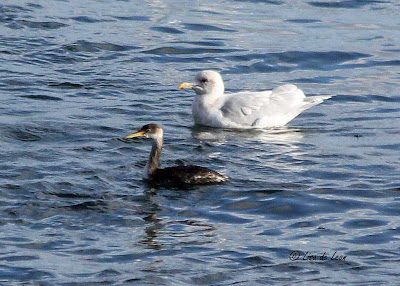 It is also considered quite unusual for a Red-necked Grebe to come so close to shore.  What's up with the grebes this year? Whatever it is, the surprise appearances of both of these birds provided a great chance to study them closely, a chance that I have never had before. That really is better than getting a picture.
Posted by Lisa de Leon at 7:20 AM