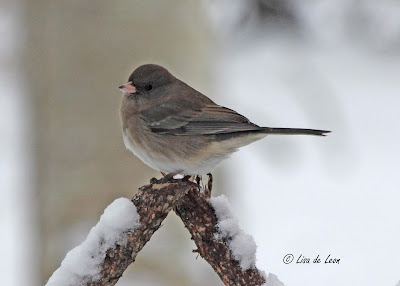 The term Snow Bird can refer to seniors flying south for the winter, the Canadian aerobatic team or any number of birds that are known to spend their winters in cold, snowy places. Most often snow bird refers to the Dark-eyed Junco, Snow Bunting or even the Ivory Gull which I have never seen. 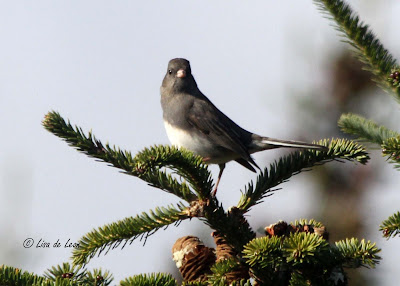 In our zone the Dark-eyed Junco is the most freqent visitor seen at feeders, and they come in abundance when the weather is bad. It is easy to not to appreciate the Junco because we see so many of them.  Yet, they are a very handsome little bird with lots of variations in color given the gender and age of the bird. 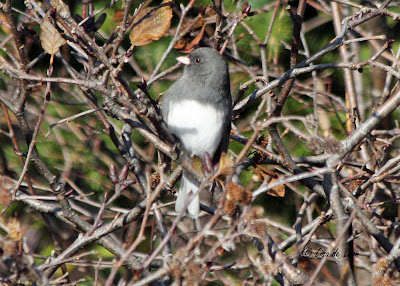 They are also quite curious and will often sit on a branch and watch me as I am watching them. 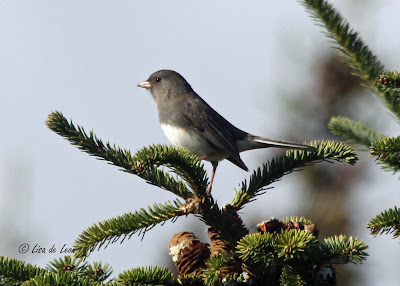 Junco flocks often mix with other birds and may be seen in the woods with groups of American Goldfinch, Purple Finch, and Chickadees.  It is always a good idea to stop and check out a junco flock because sometimes there are rare birds that are drawn into their groups. Most times there is nothing else with them but on the odd time out, something else can pop out of the woods; something like a Yellow-breasted Chat which I have never seen!

It is very interesting that the woods can often seem totally empty when out flies a single junco.  When I stop and do a little "pishing,"  they appear by the dozen! 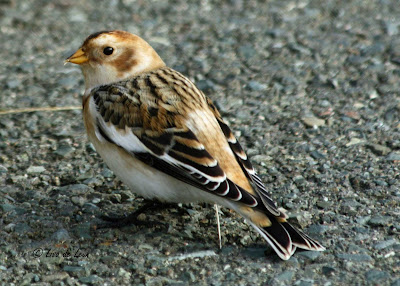 The Snow Bunting is also sometimes referred to as a Snow Bird. This is a great looking little bird that shows up at Cape Spear from time to time; although they are more common on the southern shore.  In flight they also show great colors. I have been watching for them but so far this winter I have not yet come across one.

Even the cold and blustery months of winter offer up great opportunities to enjoy birds.
Posted by Lisa de Leon at 7:28 AM