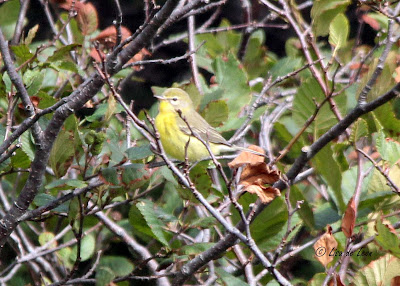 It was on September 2, 2011 when Catherine Barrett and I got an opportunity to do a full day of birding on the Southern Shore. It was a great day for birding, unusually sunny and warm....perfect for walking the road.

When we reach Renews we headed straight for Bear Cover Point Road which is notorious for attracting rare birds during the Fall. We held out hopes that we might be lucky enough to come upon a rare warbler, maybe even the Prairie Warbler spotted earlier in the week. 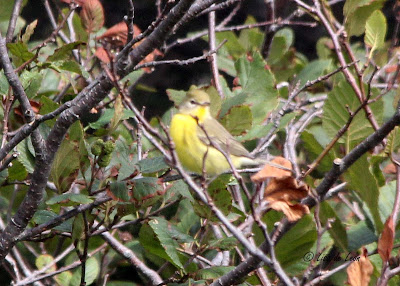 We had driven in Bear Cove Point Road about half the distance to the Bear Cove Lighthouse when we spotted two other birders standing on the side of the road with their binoculars raised.  That could only mean one thing...they had a good bird in sight. Catherine and I looked at each other with eyes wide open...could it be the Prairie Warbler?  Neither of us had seen one before. 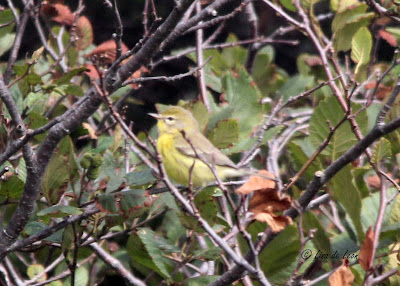 We parked some distance away from the action and began our slow walk to the spot.  The last thing we wanted to do was scare the bird away. Slowly and little by little, we could see flashes of yellow. 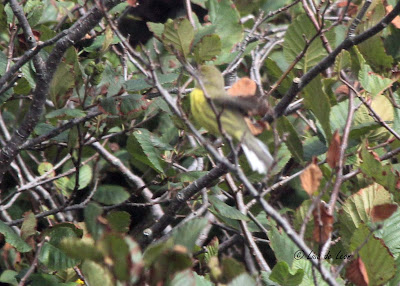 At last the bird came into focus through binoculars, but we will still afraid to move in too close. I began to take some "snaps" to record the event and to get a better look when I reviewed the shots at home. I was surprised to see the prominent white on the outer tail feathers.  If I had caught sight of this bird in flight, I might have just written it off as a junco flashing its white tail feathers. 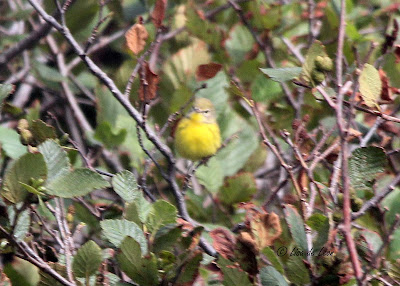 A better photographer would have made more of this opportunity but I certainly didn't. 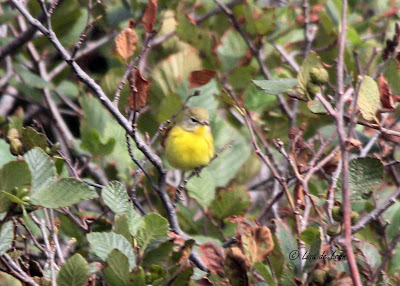 We only had about 60 seconds before the bird was gone. This didn't give me any chance to reset my camera because it was clear that the bird was flighty and might disappear any minute. 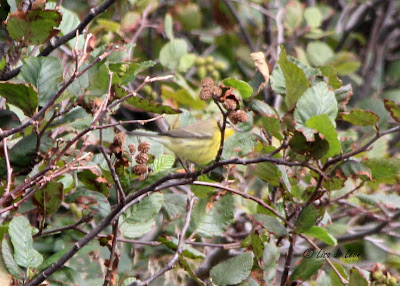 With little notice it vanished. We thought with a bit of luck we might re-find it later in the day.  We looked over the area before proceeding up the road.  On the way back we thought that we got a brief glimpse of it but there was no opportunity to get any more pictures.
At the end of the day we were very grateful for the two experienced birders who had this one in their sights when we arrived. This happens more than you think.  The great birds are often found by people who know what they are doing.  Then, on the other hand, great birds sometimes just pop out when you least expect it!
Posted by Lisa de Leon at 7:24 AM