Belted Kingfisher - An All Season Favorite 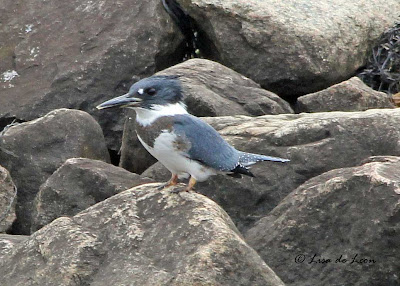 With a distinct chatter and a flash of blue flying by, it is easy to know when a Belted Kingfisher is around. This engaging little bird is found by fresh water and salt water at any time of the year. I didn't count but I have seen many, many of these little birds over the last twelve months. 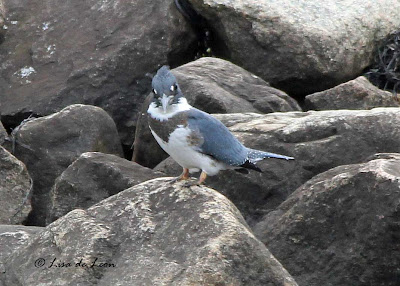 It is common to see only one Belted Kingfisher at a time but there are times when there are two in the same vicinity.  The most amazing experience that I had with the B. Kingfisher was at Quidi Vidi Lake last year in early summer.  I went for a late afternoon walk when I heard the familiar, loud chatter...a Belted Kingfisher in flight. There was a symphony of chatter!  I moved closer to the water's edge on the south side of the lake and was surprised to count SEVEN of these amazing birds busily feeding.  They would hover, dive, catch a fish and go sit on a tree to enjoy it and then repeat the process  over and over.

It's not easy to get near this species because they are so quick to get away from people.  I lucked upon this one on Pond Road in Kelligrews.  It was sitting and watching an Osprey feed.  It was so intent that I wondered if it were studying the feeding techniques of the Osprey.

No mater where you go or what you might be looking for while birding you can almost always count on some unexpected show of Nature and the Belted Kingfisher is often the species to provide this.
Posted by Lisa de Leon at 7:10 AM