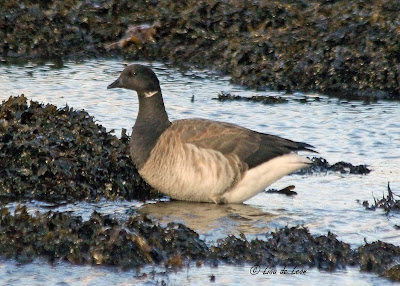 In the first week of November 2012 this Brant was spotted in the shallow salt (probably brackish) water along the side of the road in Harbour Grace. I don't know when the last Brant visited Newfoundland but this one created enough interest for St. John's birders drive the hour or so to get a look. 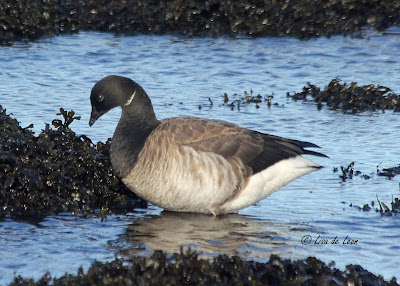 Just over three months later, the Pale-bellied Brant is still around. Last Saturday Margie McMillan and I were thinking that we were not going to see our target bird for the day.  We checked all along the water edges near the road and came up empty handed. Before leaving town we took a drive around to the other side of the bay. 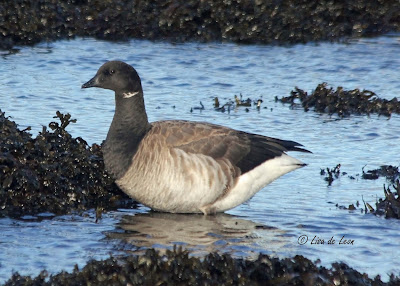 It was funny because I didn't remember how small this goose was, so when I saw it feeding, all I could say is "there is something different."  We backed up, pulled in and set the binos on it and we had it! 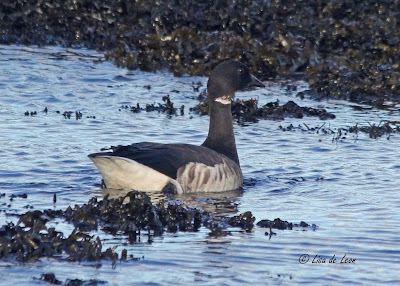 The Brant breeds in coastal Alaska and the Canadian Arctic and travels south to winter along the Pacific coasts of California and the Atlantic coast from Cape Cod the Carolinas. They can be found in salt marshes and estuaries.  Newfoundland is not in its typical range so it is a special treat to see one. This one has stayed so long now that it may stick around till Spring when it is time for it to migrate north again. Hats off to the hunters in the area that have left this great bird alone! 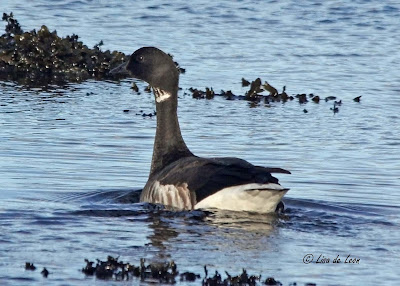 This goose resembles the Canada Goose but is much smaller and stockier.  The head and neck are said to be black but in the light that I have observed it, it appears to be very dark brown.  Whenthe Brant extends its neck the distinct white collar shows very nicely. This is an indicator that this is an adult bird as juveniles do not yet have this field mark. 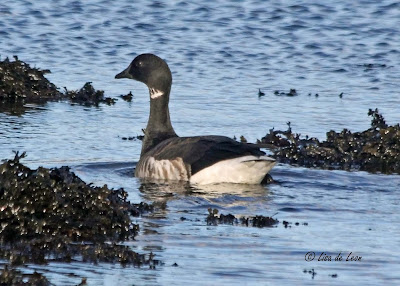 While reading a bit about this bird, I found that Skagit County in Washington state is holding an eight-day Brant hunt during this month.  The hunt is determined each year by the annual count of birds in the county.  If the number of geese counted exceeds 6000, the hunt goes ahead. 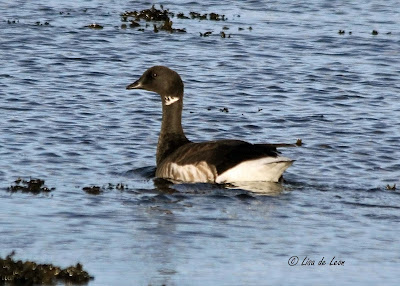 This bird is known for its strength and its great long-distance flights during migration.  In November I had to opportunity to see this bird in flight.  With a two-foot long body and four-foot wing span, there is no doubt that it is a powerful bird. There have been numerous Bald Eagles in this area and it has survive that. 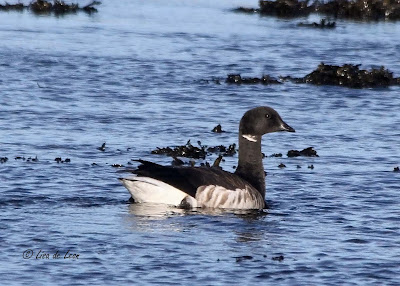 A news report from Morro Bay, California this week reported that the number of Brants making it into their area has dropped 76% since 2001.  It is unclear what has caused this decline but speculated that the feeding "up north" may be better, global climate change may have opened  up the waters farther north, or more intense storms in the Morro Bay area may be a deterrent. Whatever the cause there seems to be a noticeable shift in where the Brant are wintering. 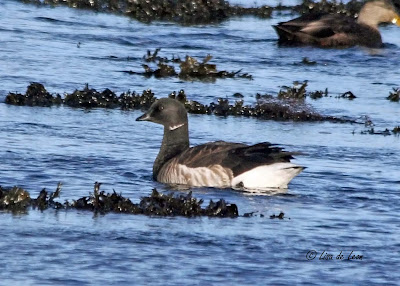 I always like to have an idea of just how unusual a visitor like this is to the province. One of the best public records of rare bird visits and species arrival patterns is the Google group: NL Birds.  I flipped through the references to a Brant and found this record.
Kelligrews lagoon (Conway Brook) - October 12,  2002
St. John's Landfill - Nov 5 2002

O'Dea's Pond, Bonavista - Nov 10, 2008
Harbour Grace - Nov. 9 2011
With the Harbour Grace Brant this is the first time in five years since this species was recorded in a Winter count. What I didn't find in the postings was the last day that each of these birds was seen.   It seems that the Brant shows up here it on its rare visits sometime between early October and middle November.