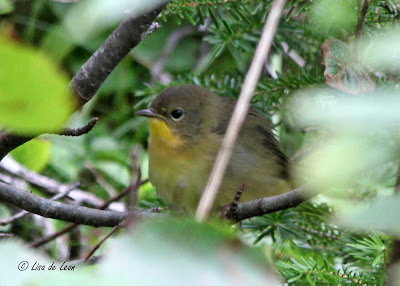 Each encounter with the Common Yellowthroat, a very secretive little bird, was memorable because it was so hard to get a good look and even harder to get a picture. 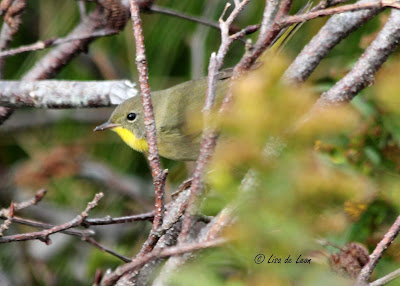 I must have seen about six Common Yellowthroat during the warbler season. All of these pictures were taken from mid-August to September with quite a variation in coloring. 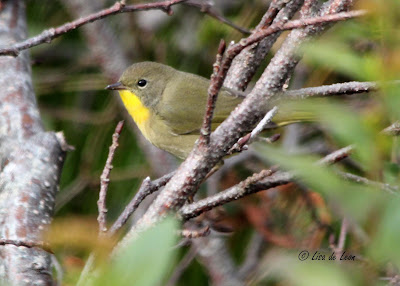 These better images were taken on Bear Cove Point Road.  Another birder and I were looking in anticipation for the many uncommon warblers that appear on this road.  We had stopped to have a look at another little bird on a very narrow stretch of the road.  I had opened the passenger door and was standing up on the inside of the door frame looking over the top of the car. 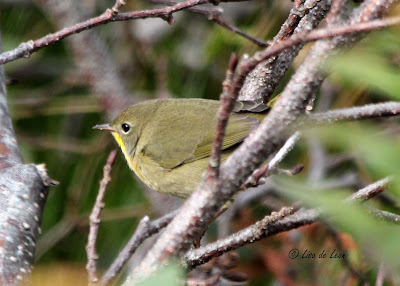 Low on the ground just feet from the car I saw a branch flick.  That is often the first sign that there may be a Common Yellowthroat sneaking around. I followed the moving branches when I caught sight of something bright yellow.  Now, I was really interested.  I didn't want to get off my perch and walk around the car for fear that I might frighten the bird away.  I just kept watching. At last out popped this Common Yellowthroat, just for seconds but long enough for me to get a few shots. Then, it was gone! 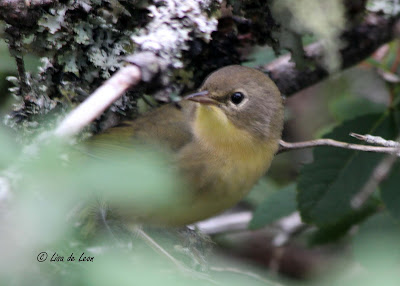 This little bird was found at in the trees around the edge of Second Pond.  Once again the flicking branches gave its location away.  It would not show itself.  We watched and watched, followed it around the bend and back, we pished and pished and nothing would bring it out into the open until it was ready. 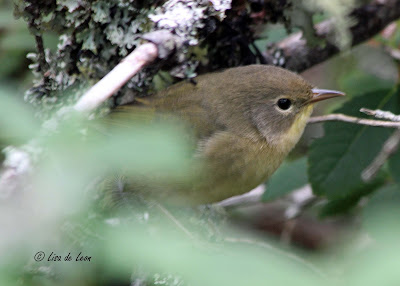 At last it made a quick move outside the thicket and showed itself ever so briefly.  The view was enough to once again be sure that this was a Common Yellowthroat. 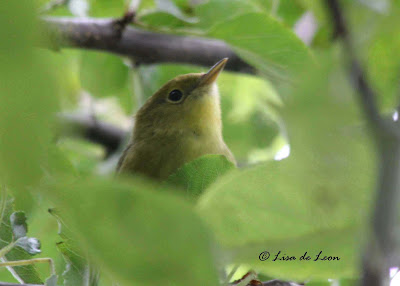 This little bird consumed the most time ever.  On a drive down to Renews a small bird flew in front of the car and landed in a tree beside the road.  I thought I saw a flash of yellow so we stopped to have a look. This was the most difficult bird to get a look at. We didn't see it fly from the tree so we could only continue to believe that it was still in the tree.  Every now and then we would get a look at a movement but could never see the bird. More than 30 minutes had lapsed and we were about to go when I saw yet another flick in the trees.  I decided that the only chance of seeing and identifying this bird was to lie down on the ground under the tree and look up in the hopes that it might show itself.  This paid off.  I got two pictures and this is one of them.

The behaviour of this bird is often the giveaway.  Every time that I have seen it, it is alone, it will often stay in the area and be quite active for a long time but not show itself. With a bit of luck a quick glimpse will reveal its bright yellow throat and greenish body.  It is always a challenge to get a look at the Common Yellowthroat and even more thrilling to pursue it.
Posted by Lisa de Leon at 7:47 AM