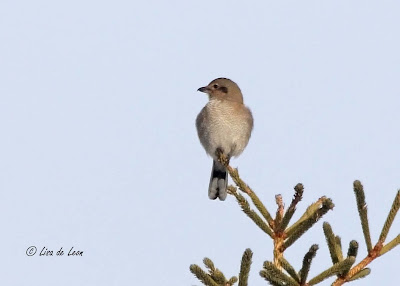 Perched high atop trees on both sides of the road to the community of Blackhead were two Northern Shrike. Early in the day their hunger was reflected in their alertness. 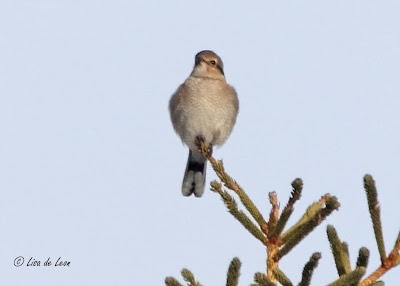 While it is nice to see this bird it isn't too great to find no other birds anywhere around. It seems like since these two young upstarts moved in the flocks of juncos and goldfinches have moved to another location. 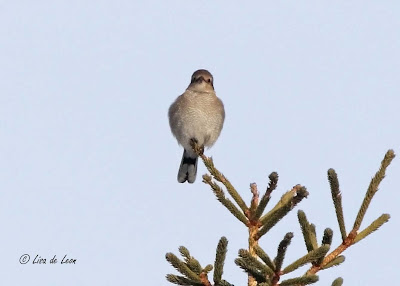 Quite some distance away both before and after this location, we were able to locate high numbers of Red-breasted Nuthatch, Black-capped Chickadees and Pine Siskins.  There was at least one sighting of Common Redpoll along the road going down the hill to the Cape but I haven't been able to find them since. 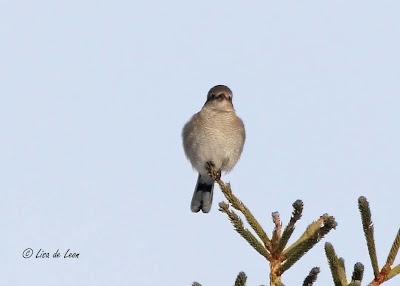 I don't know if it was the presence of the Shrike or the after effects of the very high winds that we have had for the last three days but sightings of small birds were very low yesterday.

Nevertheless, I did see a large group of Common Goldeneye and less Common Mergansers yesterday.  They were the first for me this winter. Sea birds are sometimes colorful and are very active but often present difficulty with viewing thembecause they are often too far from shore.  Any activity along the shoreline drives them even farther away.

And...so the New Year begins today. Hoping that the small birds in the city were not driven away by the fireworks, I may get our for an hour or so this morning to see what I can see.  Rain is in the forecast today but I can put up with that as rain on New Year's Day is a good omen.  Happy New Year!
Posted by Lisa de Leon at 6:27 AM