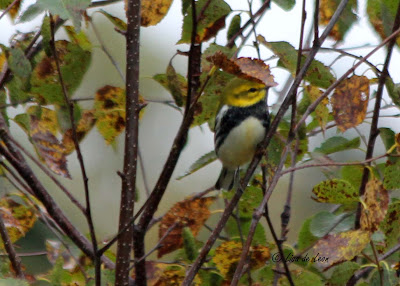 Perhaps I should have titled this "my" elusive Black-throated Green Warbler because it seemed like every time I ran into a birder out and around this summer they told me they had just seen one of these birds. I looked and looked and kept coming up empty handed. I reached a point where I thought I was not going to see one of these this year but everyone else was. 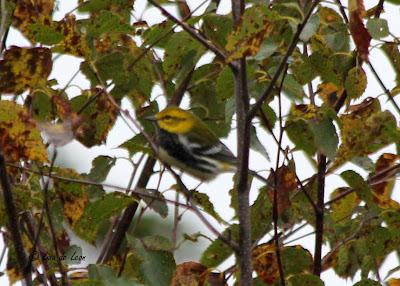 I checked all of the locations where sightings had been reported but I just could not find this bird.  Then early one Sunday morning in late September while walking along the La Manche Road totally absorbed in all of the little bird activity I stopped to watch several small birds.  When the flurry passed, I turned and did a 360º scan. There just over my shoulder sat this great little Black-throated Green Warbler. 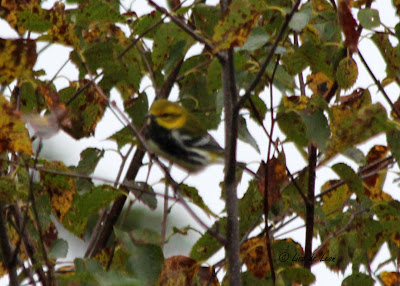 I don't know how long it had been sitting there but it was too close for me to focus my telephoto lens on it and the light was on the other side of the road. In this case the sighting was much more important than the picture.  At last I saw the bird, only my second time to see it. I am sure that I am going to the area early next season and try to get some good pictures of this special little bird.

The warblers have moved on now and it seems like a long time before they will return.  During the Newfoundland Winter Bird Count several stragglers have been found including:  A Yellow-rumped Warbler, Black and White, Orange-crowned, Cape May, Pine, Northern Parula, and a Yellow-breasted Chat.

Hmmm....the Yellow-breasted Chat - there is another bird that I have spent many hours trying to see. I thought that I had a glimpse of one last month, but I didn't get a picture to verify that the yellow flash sitting low to the ground was indeed a chat so I continue my pursuit of this very interesting and secretive bird.
Posted by Lisa de Leon at 7:10 AM