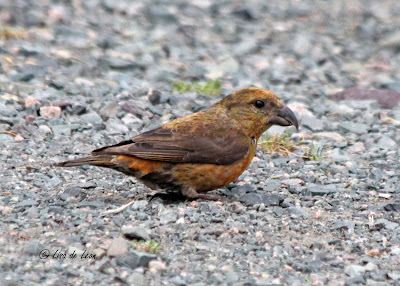 My anticipation to see a Red Crossbill grew with time. I waited a long time before I saw my first and was very surprised to find that it wasn't red at all. Perhaps I have yet to see a "red" adult, male bird because all of the Red Crossbills that have crossed my path are quite rusty, even bronze.  It is likely that this bird pictured here is an immature male because of the amount of red showing near the rump. 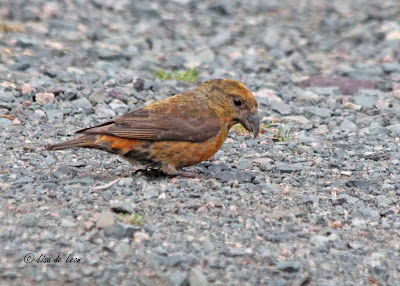 I have never seen a White-winged Crossbill as close as this so I really am unable to make a body comparison but this little bird is stocky and has very short, strong legs. He is burly! Some may say that the Red Crossbill is tame, easily approached but I think maybe he is just brave! 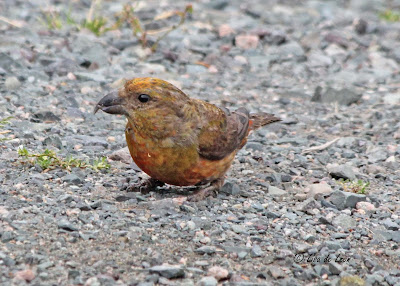 Belonging to the finch family he has a stout beak specially designed to rip the seeds right out of the tightly formed pine cones. This bird is so apt at crunching and extracting the seed from the husk that the sound may well be the first indication that the bird in in the area. 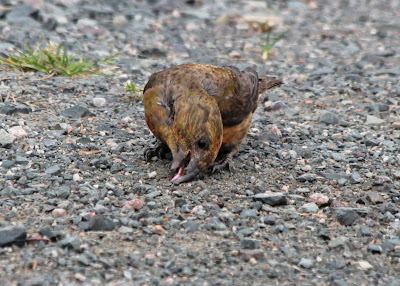 Twice this year I found Red Crossbills sitting near the road in two separate places picking at the gravel. In this location near Forest Pond the home owner told me that she put out bread crumbs and that the crossbills had been a regular in her driveway.  I watched as it stuck its long tongue out to pick up something.  When I saw other Red Crossbills doing the same thing on a stretch of road going into Maddox Cove where there were clearly no crumbs, I began to realize that it must be a common practice for this bird to pick at the gravel, even without bread in it. 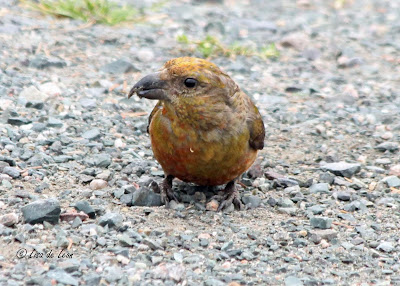 It seems that the behaviour of this bird can only be predicted by its unpredictability.  If there is a plentiful cone crop, it may build a nest and breed in the winter. Every decade or so they have been know to pick up and move south causing a significant irruption in an area were they are seldom seen. They may never return to the same place twice. I did see one Red Crossbill at Bidgood's Park in Goulds but never a second one. 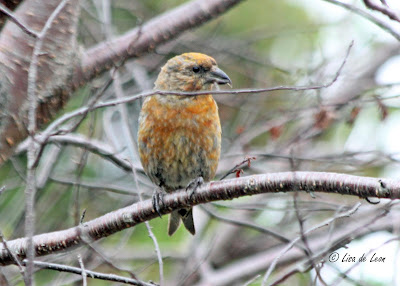 All of these pictures were taken in late September to mid-October.  They were also taken near or in coniferous woods.  The first time that I saw this species was at a feeder in CBS but that was in a year when the seed crop was very poor. (Images of the Red Crossbill at the feeder were posted on June 21, 2011 and show the females well.) I think they much prefer the natural seed right from the cone. 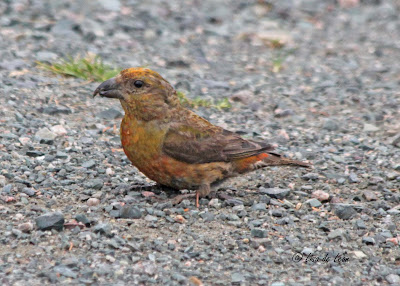 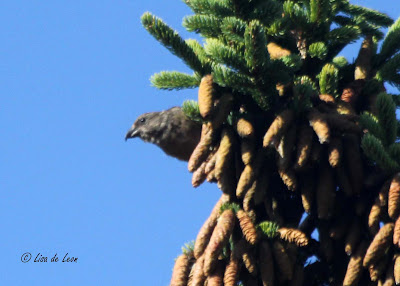 I found this Red Crossbill to be very different.  It appears to be totally gray but at close look some yellowish color is beginning to show on its shoulder.  How did I know what species it was?  Well the bill it a dead give-away. It is my guess that this is a very young bird.  It is amazing how the baby birds can grow to adult size so quickly but still look and act like babies. 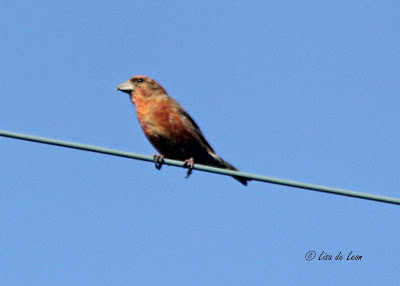 This Red Crossbill, along with the immature one above, were found in the community of Blackhead. Maybe it was the light-of-the-day effects but it seemed more red than any one that I had seen before.  This is most likely an adult male.

It is a tremendous help to me to learn about the many species by being able to go back and review a series of pictures of the same species taken in different locations, light and seasons. With all of the variables and the opportunity to observe behaviour, I just have to get better at identifying the bird on sight.
Posted by Lisa de Leon at 7:08 AM