A Typical October Morning of Birding around St. John's 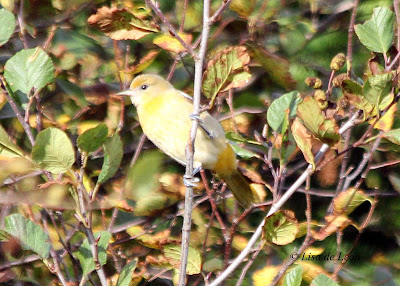 There are so many places to "bird" around St. John's that it is impossible to cover them all in a limited amount of time. In October I selected a route that held the greatest potential to yield some migratory birds. Over the last several months I have seen many great birds that are mostly new to me.  These include but are not limited to: Blue Grosbeak, Indigo Bunting, Blue-gray Gnatcatcher, Red-eyed Vireo, Warbling Vireo, Palm Warbler, Yellow-billed Cuckoo, Baltimore Oriole and more common birds like Purple Finch, American Goldfinch, Red Crossbills, White-winged Crossbills, American Pipits, Snow Buntings and more.  Two birds that I really wanted to see but have so far eluded me are the Lapland Longspur and the Rose-breasted Grosbeak. 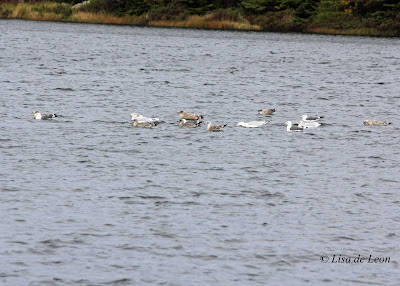 With a crop of birds like that who wouldn't include Blackhead and Cape Spear in a quick bird run?  On October 13th I took a few hours in the morning and followed my usual route to Blackhead, Cape Spear and Goulds.  That can take about three hours given all of the stopping, looking and listening.  On that morning I came across a Baltimore Oriole at the Blackhead playground and a mix of Blue Jays, American Goldfinch and Juncos. 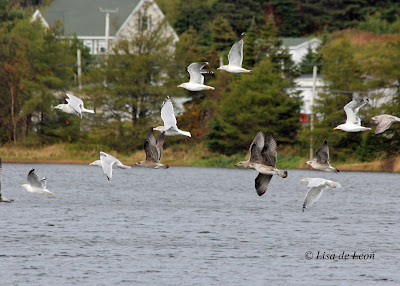 Thinking that there was not much else moving there, I headed through Maddox Cove and Petty Harbour to Goulds.  I checked Second Pond but the water was so high that there were no rocks exposed and no sign of any shorebirds around the area. So, it was on to Forest Pond to see if there may be anything unusual there.  This location has yielded numerous good birds over the years.  On this day just as I was rounding the back of the pond, in flew a flock of fifteen gulls that set down on the water. I stopped and was sure that I saw four Lesser Black-backed Gulls.  I took a few pictures and in short order they lifted off as quickly as they had come in.  I sent the pictures to Dave Brown to confirm that there were indeed four LBBGs in the group.  Much to my surprise he replied that there were seven.  Almost half of the group of fifteen were Lesser Black-backed Gulls.  He told me that it was pretty unusual to see any more than two or three together.  Ahh, even a seemingly flat day of birding can bring some surprises. 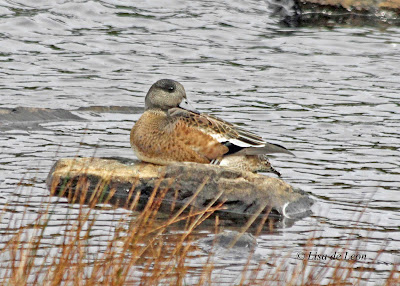 Sitting on a rock nearby was an American Wigeon, one of the first that I have seen this season.  Reports indicate that they have returned to the ponds all around St. John's and will likely be a common sight for the months ahead. Satisfied that I was not going home empty-handed I started my return route to include Backline Road, Cochrane Pond Road where I checked the farm fields, Ruby Line Road to Old Bay Bulls Road to Pearltown Road to Brookfield Road and home again.  I have been wondering if the Sandhill Crane might return again this year. However, given the lateness of the season that doesn't look likely.  I was also hoping to see a Hudsonian Godwit but it seems that I missed the ones that stopped over at Second Pond for a short visit.

The list of possibilities seems endless. I have been very lucky this year to see all of the different species that have crossed my path but there are still very many to see. The diversity and the unexpected appearances of new birds are just two of the many lures that keep me out driving and walking around. No other activity that I have been involved with remains so fresh, even after two years of involvement.
Posted by Lisa de Leon at 7:47 AM