Anyone who has ever been to Bauline East, Newfoundland will recognize these colorful buildings near the harbour.  I rarely see any activity in the area so I think they may be used seasonally.  The splash of vibrant colors is enough to make anyone stop and enjoy. 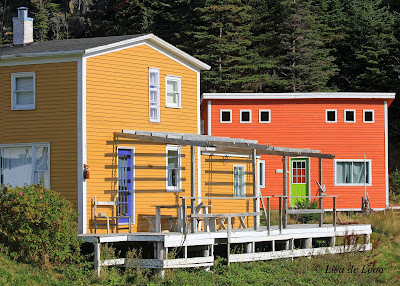 I was thinking this morning about a quick trip made to Bauline East last Sunday morning. It made me think of how it must be to be a firefighter. The alarm goes off, you haul on your boots and coat and grab your keys and head to the alarm site.  Birders do the same thing, sometimes even with the same sense of urgency as a fireman.

A post on the Discussion Group announced that a Scarlet Tanager had been seen near Bauline East in Burnt Cove.  That is only about 45 minutes away so why not jump in the car and try to find this great little bird.  I have not seen one this year and never seen one in its Fall plumage. 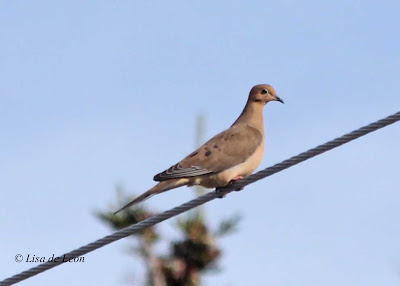 The trip was on.  We arrived at the location and there was not a bird in sight. That's not unusual.  We drove slowly along the road heading to Bauline East. Then the bird activity picked up and we stopped the car to take a look.  Two very interesting birds appeared among the juncos, Red-breasted Nuthatch and Goldfinch. However, they were there one minute and gone the next and no picture reported their existence, ergo no identification. Ugh! Every time that happens, I feel somewhat deflated. 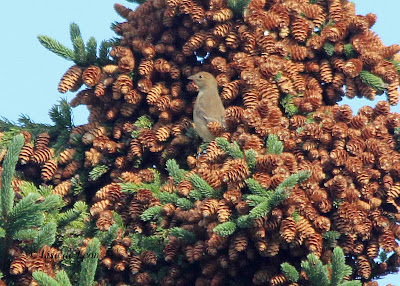 I decided to leave the car and walk the road. There was the usual Belted Kingfisher that resides near the freshwater pond. It chattered up a storm as it moved about.  I walked to the end of the road reaching the boat launch without any other bird action. 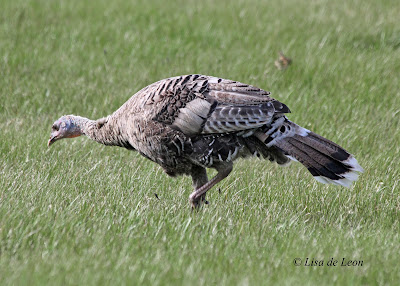 On my walk back I flushed three Mourning Doves up from the side of the road.  I wonder where they were when I first walked by.  Mourning Doves seem to be everywhere these days.  I have seen eight over the last two weeks.

My birding buddy had not had any more success than I did so we got in the car and headed back up the road.  This time when we approached the location where the Scarlet Tanager was previously sighted, we saw some junco activity.  We inched as close as possible in the car and sat and watched.


Then all of a sudden I heard my birding partner say she was on a bird.  I struggled to see it with my binoculars because of the distance and the background color that was impacting visibility.  Then finally I saw it and started getting pictures.  I now must confess that we thought we had the Scarlet Tanager. Feeling quite proud of ourselves we thought we could head back home. 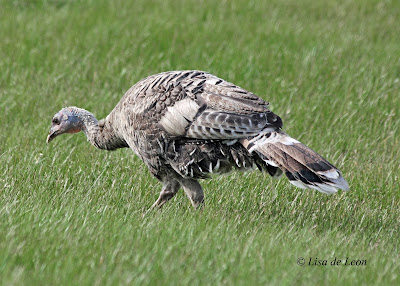 On the return drive we couldn't help but notice this huge bird on a lawn bordering the highway.  Screech went the tires and we pulled into an empty driveway to get a better look. There was this perfect domestic turkey grazing in the front yard.  Without a feather out of place or the least bit of fading or wear and tear, this turkey was perfect. It didn't look like a wild turkey at all.  We spotted a neighbor working in his yard and stopped to ask the story of this big guy.  It apparently belongs to a nearby family and has been left out on its own for quite sometime.  Seeing it so unexpectedly was a treat.

Well, we returned home and I began reviewing the pictures from the day.  It wasn't long before I really began to doubt that we had the Scarlet Tanager.  It was just too brown.  I sent the picture to someone who would surely know and got word that it was an Indigo Bunting. What?  How can it be that I didn't recognize an Indigo Bunting after I had just been studying them?  There didn't seem to be even a tint of blue on it. Anyway, the best part of the story is that it turned out to be a "life" bird for my buddy.

For both of us we reflected on how "wishful thinking" can color one's vision.
Posted by Lisa de Leon at 8:25 AM