In pursuit of the American Pipit, again! 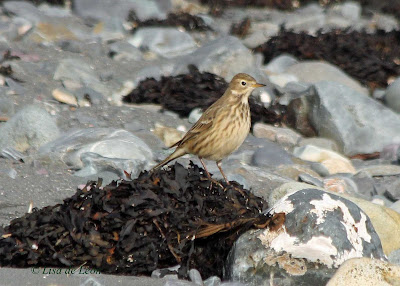 The experience that Catherine Barrett and I had on November 4, 2011 at Renews Beach reminded me a lot of our first experience with an American Pipit that we had on January 4, 2011 at Bear Cove Beach. 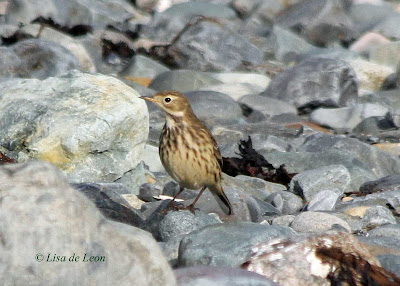 We met up on Nov. 4th quite by accident when viewing the Western Kingbird.  Catherine joined Margie McMillan and me as we continued to scour Renews for any other treasures.  There had been several reports of some rare to uncommon sparrows, an Indigo Bunting and a Blue Grosbeak found around Renews Beach.  The tide was low and it was a great day to walk the beach in search of these birds. 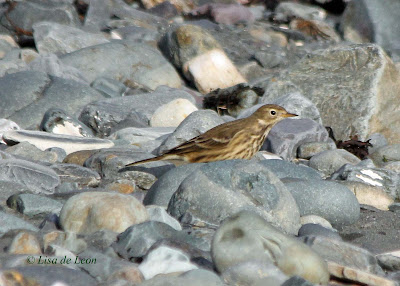 About half way down the beach two sparrow-like birds flushed and flew to another part of the beach. All that happened so quickly that no ID was possible. We walked the distance of the beach and flushed the pair again who then returned to their first location.  We turned around and walked back to try to get a look.  For the third time, up they came over our heads and back to the other end of the beach.  Still we could not identify them. 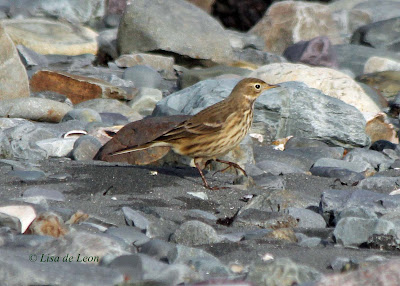 This time we decided to split up and approach them from both sides, very slowly and deliberately, mind you.  This was working!  We began to close the gap and they were still on the ground. At last we could get the binoculars on them and identified them as American Pipits at about the same moment.  We gradually worked our way close enough to get these pictures. They are a darned sight better than the ones reported in the January 2011 posting. 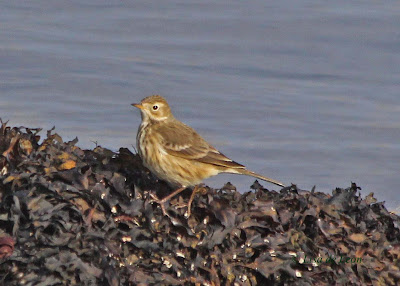 In both situations this species of bird made us work very hard to get a good look at them.  Next time I come across an American Pipit, I will factor in the behaviour that we witnessed on both occasions.  That may help.  It is likely that if this had been one of our target birds that they would have flown for the nearby woods and left the beach entirely.


I can't describe how it feels to finally get a bead on a bird that is difficult to identify.  It is the thrill of the hunt combined with the satisfaction of recognizing the bird and capturing a record shot that is so special.  I can't tell you how the sands of time flow through the hour glass when actively engaged in this type of birding.
Posted by Lisa de Leon at 8:40 AM