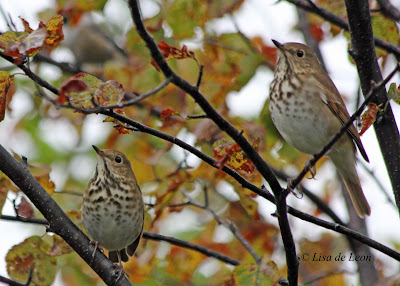 On September 24, 2011 a birding friend and I headed to the Southern Shore to look for warblers and shorebirds.  On our way down we decided to take a quick look on La Manche Road to see if there might be any activity there. 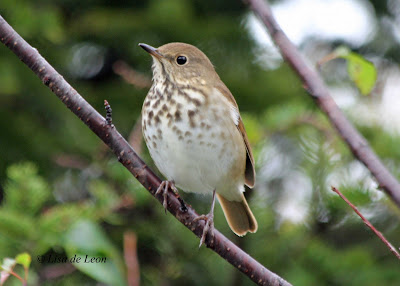 All of a sudden this quick detour became a main event!  As we drove down the gravel road birds poured out of the trees everywhere.  There were a mix of sparrows and Hermit Thrushes.  The sparrows quickly disappeared leaving us with at least six Hermit Thrushes, maybe more.  They surrounded us. 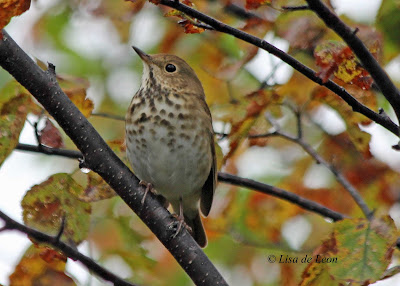 It was a strange event as the same birder and I had encountered a large flock of very vocal Hermit Thrushes on Bear Cove Point Road much earlier in the season.  This group was quiet but very active and particularly curious about us.  They often came within three feet of us and sat to people watch. 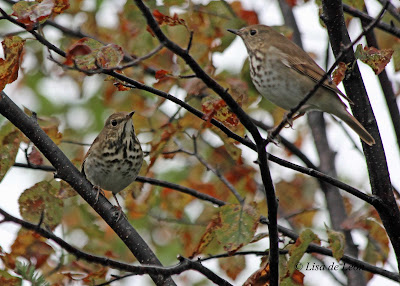 They were stunning. I think up until that point we may not have been totally awake but all of this action snapped us out of an early morning stupor and into full-scale birding mode. It was amazing! We could have easily missed this by speeding down to Renews. Without a word spoken between us, the awe we were both experiencing by this show was all over our faces. 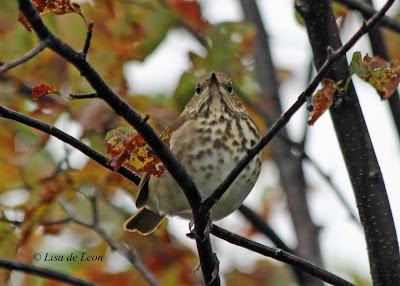 We had about ten minutes to watch, learn and admire these little birds before they began to move up the road. 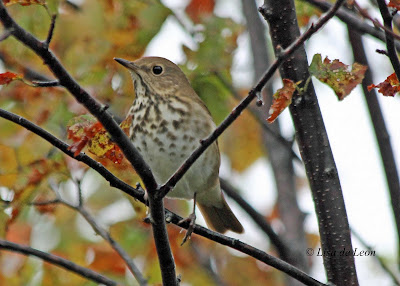 When they did I slowly followed and by luck, I came  upon another flurry of activity on the hillside off the road. There were warblers all around.  Some of them, I never did see enough to identify, but I got a good look at a Black-throated Green Warbler.  As much as I searched for this bird this summer, I was very pleased with that encounter. 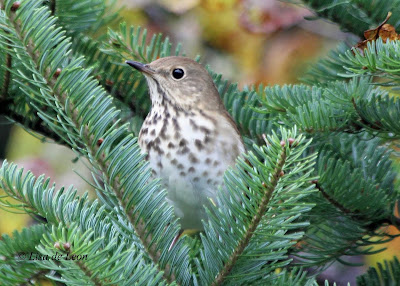 On the other side of the road was more activity.  I stood and watched. Then, out popped a Northern Parula!  This was a first for me. As often happens when I am in the midst of action like this, something occurs that disperses the birds.  On this particular morning it was an oil truck that came barrelling down the road and all the birds flushed and hid away. 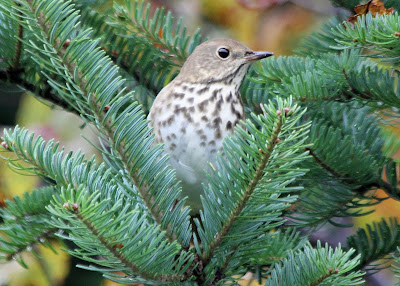 Deflated, I waited.  Nothing returned. I walked farther down the road and there was no activity.  On the way back to the car, I found the birds starting to return to the spot.  My friend joined me at this time and we watched.  She spotted a yellow bird that I was only able to get a partial image allowing for a sketchy ID.  The parula did not return but we were hopeful when once again we heard the roar of the oil truck returning! Par for course....the birds vanished, the truck blazed by and we stood looking at empty trees and the still of the morning.

Having another destination in mind, we decided to move on but with a tremendous amount of satisfaction with our first experience of the day.
Posted by Lisa de Leon at 9:01 AM