My Daily Activities are Time Stamped! 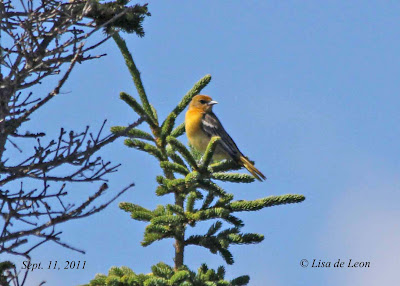 Never before have my whereabouts been so well documented.  Typically, if you asked me what I did last Wednesday (for instance), I would have to strain to remember.  If I didn't have an appointment or event written in on my calendar the likelihood of my ever nailing down the the daily activity would be minimal.
Now, I see my travels and activities in "Super Focus," as the commercial says.  I can easily look into my daily photo downloads and tell you by time and date where I went and what I saw. Aside from a chronological log I also enter rare and extremely rare bird sightings on my iPod by date and place.  As these entries grow I can refer to those records to better predict where and when I may be able to see the bird again.  They do, indeed, follow a pattern sometimes.  Other times a rare bird just pops up when least expected. 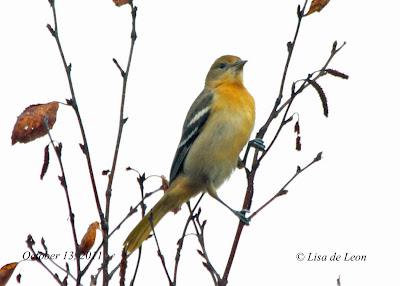 The first Baltimore Oriole that I saw this season was spotted along the East Coast Trail at Cape Spear on September 11, 2011.  Typically, this is a stand-out bird and would be noted as a highlight of a day, but on that particular day it took a back seat to the hunt for the Blue-gray Gnatcatcher that had been sighted in the area.  During the several hours that another birder and I were searching for the Gnatcatcher, one Baltimore Oriole flew in, perched for a minute and flew off not to be seen again.  It was actually quite a distance away and I didn't identify it on the spot. When I reviewed my pictures, I realized what it was. 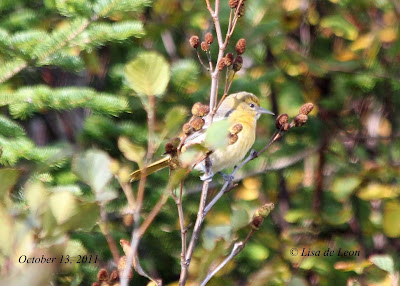 It is very interesting how a special bird can trigger a memory of the before, during and after a sighting.  The first time that I saw a Baltimore Oriole in Newfoundland was on Bear Cove Point Road while on a tour with Dave Brown. On that day I could get fair looks at the bird with my binoculars but because the sun was behind the bird, I don't have any suitable pictures of it.  The next time I saw the B. Oriole was on a Sunday morning (September 19, 2010) bird walk at the Botanical Gardens in St. John's. We had reached the look-out and were scanning the trees below when in flew a female Baltimore Oriole and perched in a tree very near us. So, far two good sightings but no male yet.  Then word came last winter that an adult male Baltimore Oriole was visiting a feeder in Fermeuse.  That warranted a trip, of course, two trips in fact - January 2 and January 4, 2011. 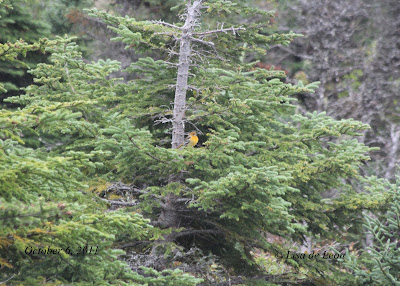 This year has seen a particularly high number 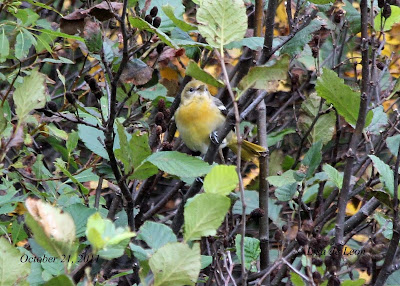 of Baltimore Orioles show up on Blackhead Road near and in the community of Blackhead.  On October 6th I spotted a brilliant immature male sitting in a tree quite a distance from the road. I was amazed at how vibrant its color was and how it really stood out even though it was so far away. On that particular day while I was looking at this great little bird, two other birders had their binoculars on an adult male Baltimore Oriole near the Blackhead museum.  I couldn't tear myself away from this one in time to go see the other on.  On one particular day, undocumented, I came across a group of five Baltimore Orioles some distance from the road.  They flew into a tree and out again very quickly. On October 13th, I saw two in the Blackhead Playground and they stayed around long enough for me to get a few shots.

My best opportunity to get a descent picture of the B. Oriole came on October 21, 2011, once again at Blackhead Playground.  However, I didn't seem to be up to the challenge of the dark day, fog and back light. Nevertheless, I had the opportunity to really watch the behaviour of this dull colored little bird. 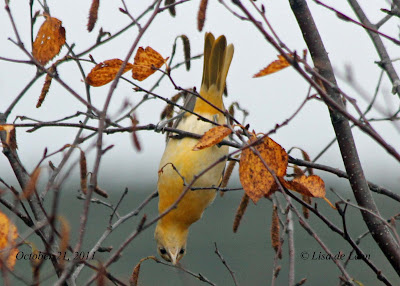 It was eating insects that it was gleaning from a Birch Tree and didn't seem to mind that there were four of us in the zone watching closely and taking pictures.


No feat was too challenging.  This bird is agile and because of this I was able to get really good looks at the underside as well as the topside of this bird. 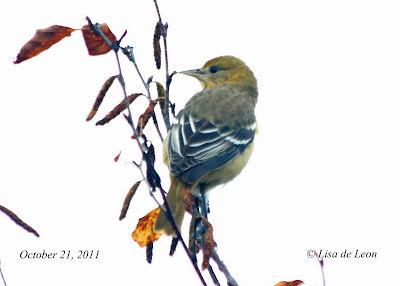 I don't know about other new birders but when I imprint a memory of a bird in my mind, it represents the vision exactly as I saw it. If a bird appears anew in another time and place and it is not in the exact position, I may not recognize it right away. That sends me running to my guide books once again to come up with an ID. 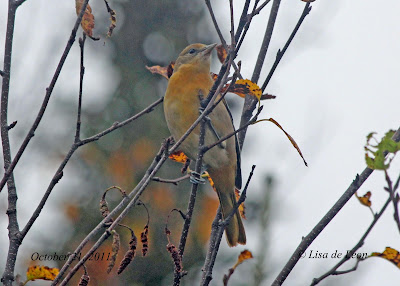 The opportunity that I had to watch this Baltimore Oriole from every possible angle will go a long way to helping me identify the bird more readily the next time I see it. 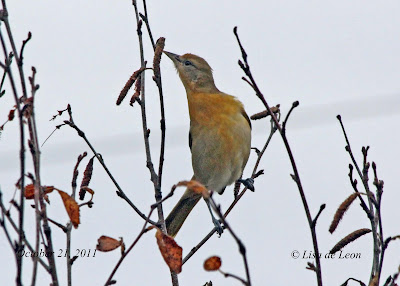 I took a quick trip to Cape Spear yesterday and looked all around Blackhead but didn't see any sign of the Oriole.  Have they left?  Will some find their way to feeders?  What happened to that adult male that I missed in early October? If only the birds could be date-stamped with where and when it would be so interesting to know where they have been and where they are going. 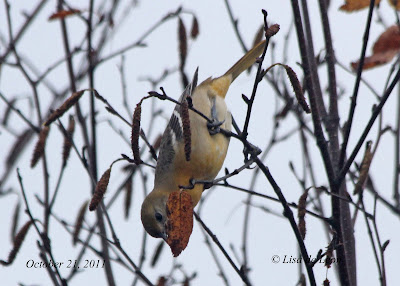 Why bother to go see a bird that I have already seen several times?  Because there are so many variations of each bird. There is the female, male, color variations, perspective changes, behaviour to study and then, of course, there is the sheer pleasure of just seeing the bird.
Posted by Lisa de Leon at 9:22 AM