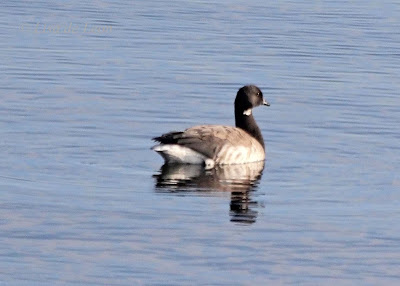 The weather forecast didn't look great for last Friday but the sun came out so we figured we could handle the expected wind. Well, the wind never did materialize and the day turned out to be perfect for birding.

Another birder and I headed to Harbour Grace to try to catch a look at the Brant Goose that has been spotted in the harbour area over the last few days.

The drive was wonderful and it became more and more apparent that the weather was going to cooperate. 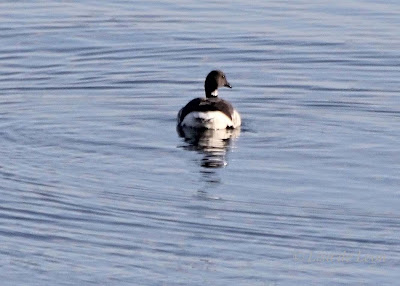 We arrived in Harbour Grace and cruised down the harbour road.  We spotted another birder before we spotted the goose but the long lens was a sure indicator that the goose was close by.  We parked the car and walked back to the bridge.  There it was...the Brant. It was just too easy but that is okay.  The sun was in our eyes but with the help of binoculars and the generous offer of views through the scopes of two other birders, we were really able to see the great detail of this rare visitor to Newfoundland. 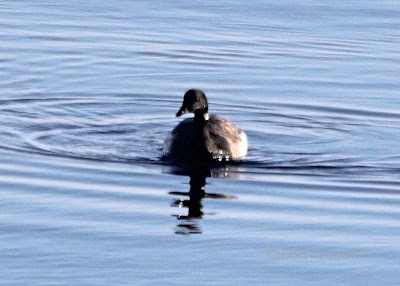 Honestly, this was one of the numerous birds on the Newfoundland checklist that I never expected to see but there it was large in its life.  It was eating well and not at all perturbed by the gathering group of on-lookers.  It just may stay a while. 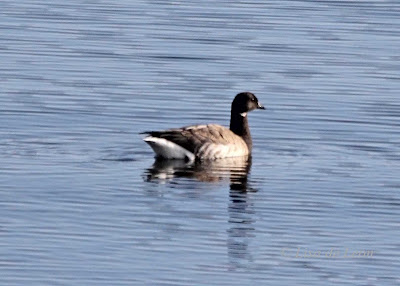 There was another bird that I wanted to photograph on this trip, and it was on the opposite side of the road.  The lighting was more favorable on that side so I kept moving back and forth hoping to get a decent photo of the Brant.  Well, that never really happened but Nature did.

We walked up the road to view another life bird for me, the Surf Scoter.  It was quite a distance away so we decided to drive around to the other side of the harbour to get a better look. We quickly re-found the Surf Scoter when all of a sudden many ducks lifted off the water.

My friend and I looked at each other wondering if we had caused this exodus. 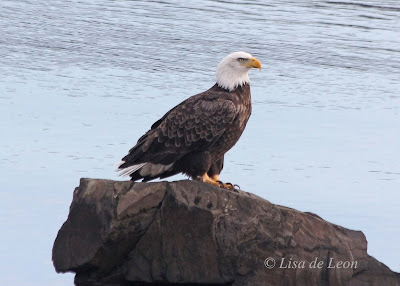 Within moments we spotted a Bald Eagle overhead and then another. Two beautiful adult Bald Eagles had moved in and stirred the whole mix. 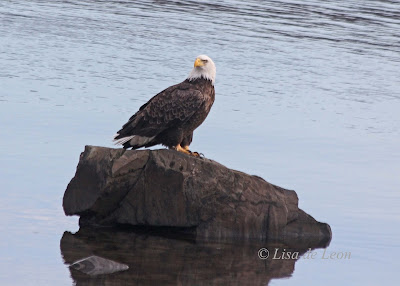 One landed on this rock while another set down on a grassy patch in the middle of the water.  They sat in all of their splendor and power staring at an empty basin.  All the birds were gone, even the Brant. 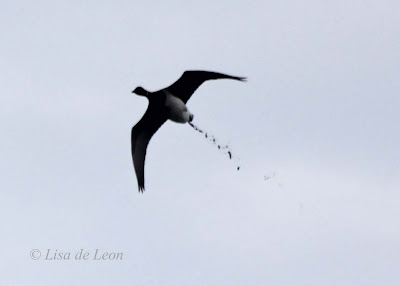 Then, there it was flying high across the open water.  I think the Bald Eagle scared it a lot! 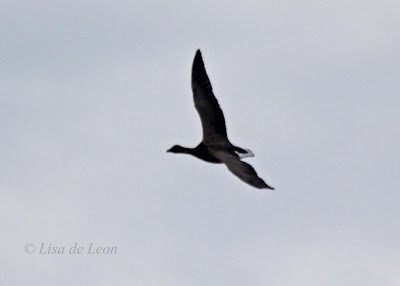 We stood there with our binoculars and camera trained on the Brant as it flew from the end of the harbour to the mouth of the harbour and back again and again. 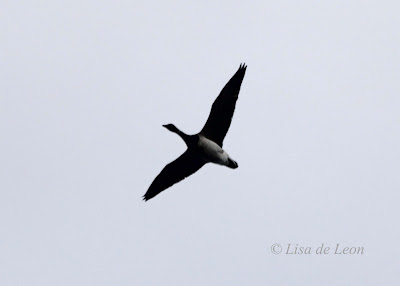 It soared by us several times and I was ill-prepared for the photo op that arose.  It was just so amazing to watch this large bird take control of the water way. 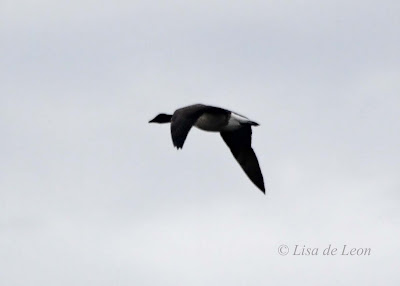 All of this activity lasted for more than five minutes and we were just shaking our heads in awe.  Wow!  Nature offered up a wonderful display, better than IMAX in just moments and we felt really lucky to be there to see it all.

In time the ducks began to move back into the safety of the water's edge, one Bald Eagle moved on and one remained on the rock.  The Brant also landed in the original area but farther from shore and a good distance from the sitting Eagle. In short order things became calm again and my mind's eye stored yet another moment of wonder.

Now, I wonder if that Snow Goose spotted on the West Coast on the weekend might make its way to St. John's.
Posted by Lisa de Leon at 4:32 PM