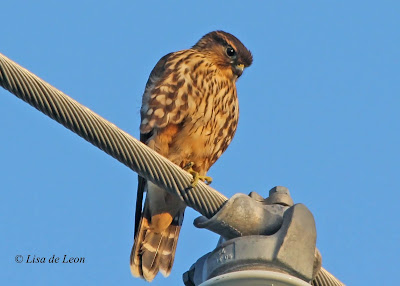 I waited a long time to get a really good look at a Merlin.  Finally, an opportunity arose.  This summer two Merlin built a next only a couple of kilometers from my house and on a route that I travel daily.  I often saw them fly from one side of the road to the other and then disappear.  On one day, one was sitting on a dead tree in the middle of a marsh.  Once again it was too far for a picture but I was able to see it fairly well with my binoculars. 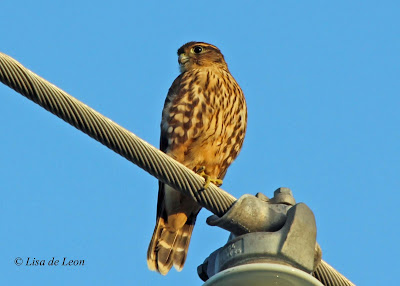 Then, late one evening during the "golden hour" I spotted it sitting on a power line. I almost always have my camera with me and I did then.  I pulled into a close-by parking area and made my way toward the bird. It just sat there. 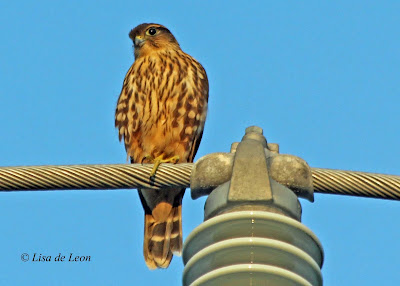 The Merlin is a small falcon that is usually no longer than 13 inches. Its size does not diminish the power and strength of this bird.  While it will prey upon small birds and mammals, I watched it feeding on insects in the marshy area.  I wondered how could that sustain this bird.  In hindsight maybe it was collecting insects to feed its young.  I never saw the young Merlin but I heard that there were three of them. The family stayed for quite a while but seemed to be gone by early September. 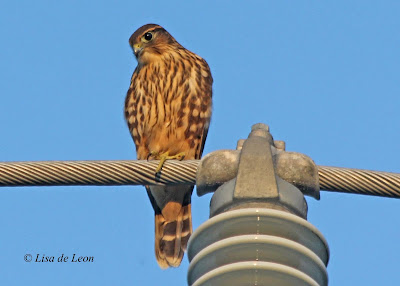 This is my first posting for a Merlin and it joins the ranks of other raptors that I have seen in Newfoundland.  These include the:  Sharp-shinned Hawk, Northern Goshawk, Northern Harrier, Rough-legged Hawk, Osprey, Peregrine Falcon (flying in the distance) and the Bald Eagle.  The raptors that I really want to see up close are the: Peregrine Falcon, American Kestrel and the Gyrfalcon, all falcons. 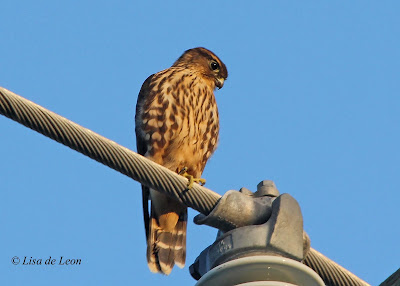 Time absolutely vaporizes when watching one of the amazing birds of prey.

Note:  To view a slide show of images only, click on one of the pictures.
Posted by Lisa de Leon at 8:10 AM