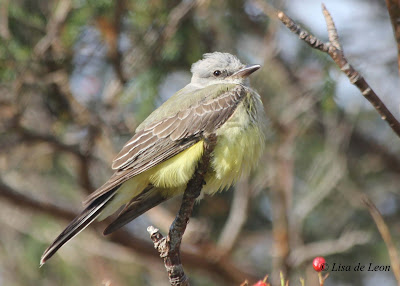 A Western Kingbird has dropped into Renews for a visit.  What is it about Renews that attracts so many rare birds?  This is the same community that hosted the Forked-tail Flycatcher which by the way has left us now.  Hopefully, it made a safe trip to warmer parts of the world.

It would be nice if Renews maintained a record of rare birds that have visited their community in a town museum or other public area.  I'm sure the list would be quite long and very interesting. 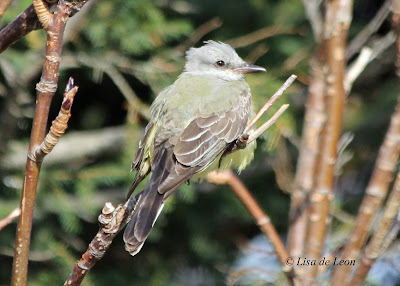 The Western Kingbird has been around for more than a week now and is staying very much within about a 100 yard radius of where it was originally found.  It flies up to the power line, catches flies and then zooms over to its favorite tree filled with dogberries.  There is a resident cat who seems to be enjoying its visit as well.  Given the time of the year there are not many other birds around in the area so this kingbird reigns king! 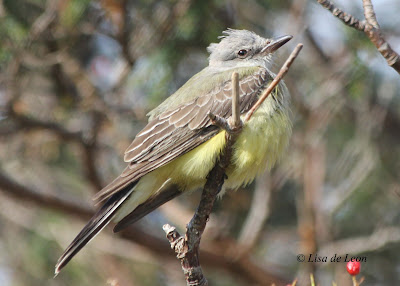 It seems to be very tame and is not at all spooked by the many birders who have viewed and photographed it. This bird species it known to be gregarious in the winter and will often drive other birds away from its nesting territory.  Maybe it senses that food could be scarce here and he may be keeping other birds away from his berry supply. 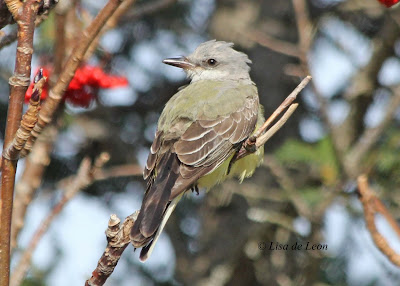 The Western Kingbird spends its breeding summers from the mid-west states to the California shoreline reaching north to the western southern Canada borders. It is then supposed to migrate to the tropics for the winter.  Nevertheless, the Western Kingbird has been spotted regularly on the Atlantic Coast.  For us here in Newfoundland, it is a rare visitor. Every birder who can will get in a car and go see this bird. 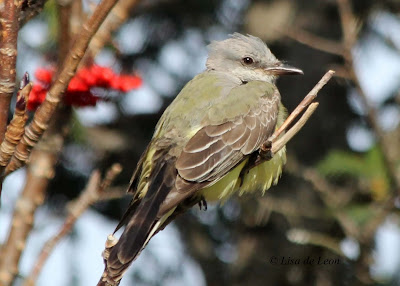 I first saw a Western Kingbird in Northwest Arkansas in July 2010. At that time it was east of its typical range but certainly not as off course as this one is. 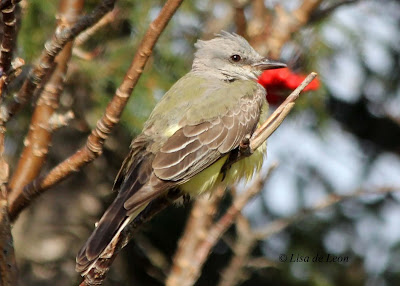 I was surprised by the richness of the yellow on its breast. Despite its great coloring, this bird looks a little frazzled.  The last picture in this series shows some damage to its tail feathers. What must it have gone through to arrive here. 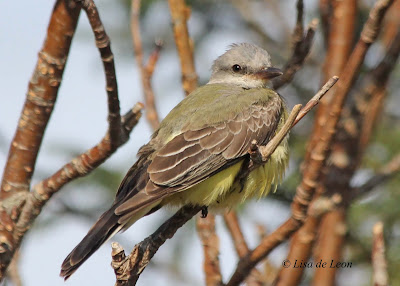 Other than that it is frisky and spry. It seems to be eating well and has a lot of energy and seems healthy enough. 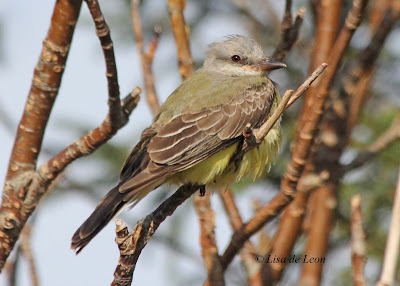 Two other birders and I spent quite a bit of time with this bird and watched its behaviour.  After a while of watching, its behaviour became quite predictable. 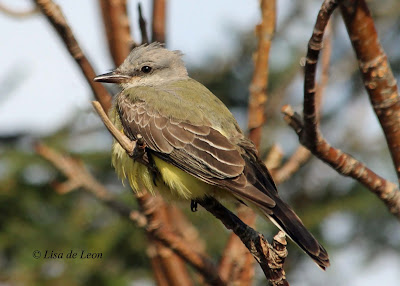 It perched on the power lines, flew down to catch a fly, flew back up to another power line time and time again. 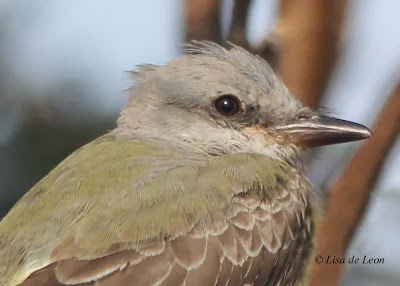 After about twenty minutes of this activity, it flew over to the Dogberry Tree where it seemed to be collecting flies/insects from a fabric lawn swing and back up to the tree again. 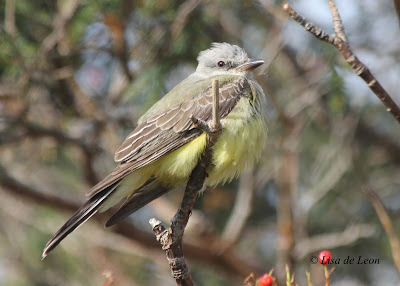 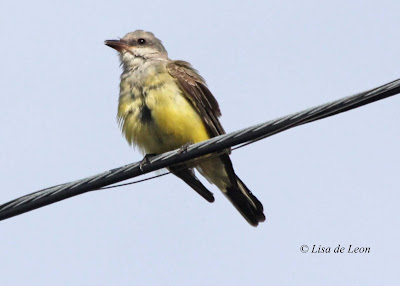 This shot on the power line represents my first look at this bird.  It also shows  very well the white throat, gray neck and yellow belly while the other shots do not. 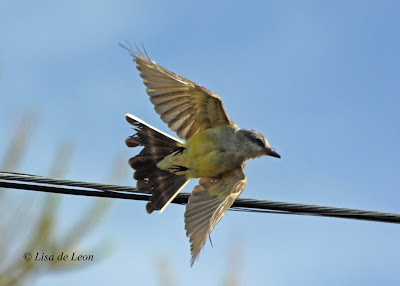 I was very lucky to get at least one clear picture of this bird in flight because it was so fast. It came off the wire heading out for lunch.  Hopefully, the damage to its tail won't affect it when it decides to make the trip home.  It certainly didn't seem to impact on its agility while fly catching.

This was indeed a rare treat.  I really never expected to see a Western Kingbird here.

Note:  If you double click on the first image of a post, it will open a slide show of just the pictures in a larger format.
Posted by Lisa de Leon at 11:58 AM