Where is our Yellow-legged Gull? 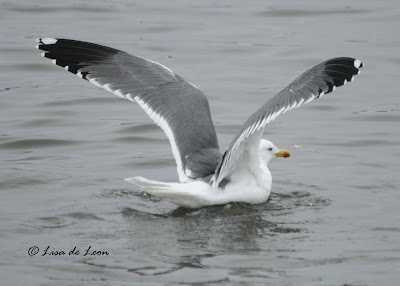 By this time most years, a Yellow-legged Gull has already put in an appearance. Where is our YL Gull this year? 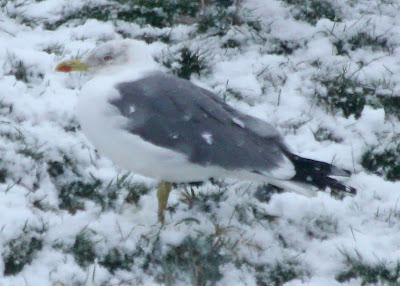 Is it because no one is out there looking for the gull? Or is it that someone may have seen it and not been sure of the ID? I know I have been looking over every gull that has a darker mantle.  I have been sufficiently satisfied that the gulls I have scrutinized have all been Lesser Black-backed Gulls.  How can I be sure?  Well, I went back to re-read Dave Brown's blog where he dedicates a lot of time and pictures to describe the unique characteristics of the Yellow-legged Gull.  I have no intention of repeating his well-presented overview and would recommend you check out his article at: http://birdingnewfoundland.blogspot.ca/2011/02/yellow-legged-gulls-of-newfoundland.html 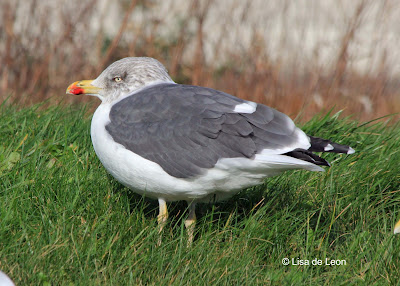 In the meantime, I will present a few very quick tips I garnered from his article:

1) As shown in the first picture, the YLG has a snow white head (and of course, yellow legs) from about mid-December onward.
2) At this time of year (November), the YLG can have streaking on the head and face. The  streaking can look darker around the eye. There is never streaking on the breast of the YLG. This streaking will gradually disappear from the back of the head to the front as the month progresses.
3) This third picture is of a Lesser Black-back Gull taken just last week in a parking lot. Because this bird doesn't have any breast streaking and does have extensive head streaking, it is a little more difficult to ID. I would advise looking for the answer to this question on Dave's site. There are actually several reasons he gives. 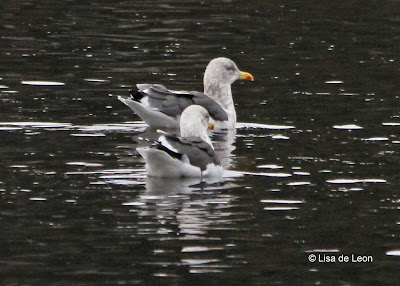 I found these two LBBGs last week at Forest Pond. I have actually seen about eight LBBGs in Goulds since early Fall. In this picture, both birds have streaking on their neck and breasts - clearly, not YLGs. 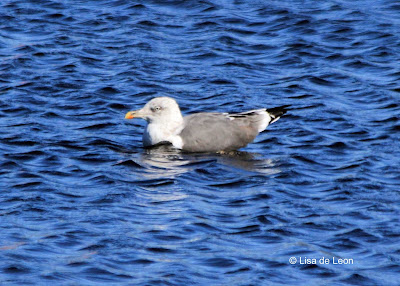 This gull, located at Quidi Vidi Lake early this month, gave me reason for pause. It seemed bigger than a LLBG and the markings on the bill seem to indicate an immature bird, I wondered about it enough to send a picture to Dave. He confirmed it is a LBBG. There are a number of differences between the YLG and LBBG including streaking, shape of the head and beak, eye ring, red-line near edge of the mouth and mirrors on their wing feathers. If a YLG turns up, it will be a very interesting exercise to work through all of the descriptors in Dave's article to deduce an accurate ID. In the meantime, I am learning more about the LBBG which will help me when I do see a YLG. Let's hope the challenge arises this year. 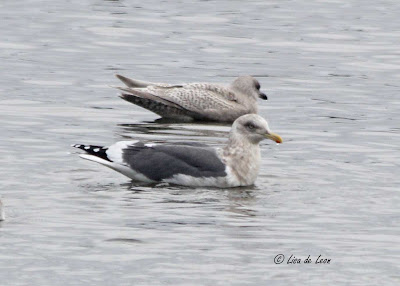 We also are missing another rare gull. The Slaty-backed Gull showed up in January of this year but didn't stay around very long. There are some similarities between this gull and the LBBG as well. I guess the easiest way to eliminate the LBBG is the SBG has pink legs, not yellow. I hope it comes out of the water, if I see one.

The best opportunity to see one of these special gulls may be around Quidi Vidi Lake, where (in the past) they have been spotted on the water as well as in the surrounding area including rooftops (like Santa) and ball fields. Keep hunting as there may just be a rare gull around already!﻿
Posted by Lisa de Leon at 12:43 PM