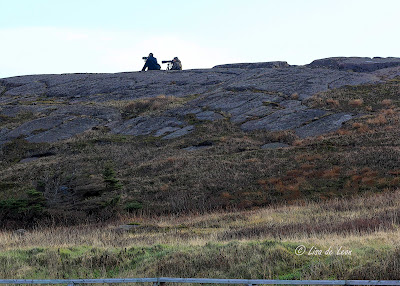 It has been an amazing three, short years since I walked out of my last full-time work and into the great outdoor world of birding.  I took a drive to Cape Spear when I left work to drink in the great expanse of the world ahead, a world very different from the routine of work/home/sleep/ work etc. It was one of those spectacularly sunny, warm days with no winds at the Cape. Everything sparkled! My senses were heightened. For the first time really, I noticed the birds flying free and marveled at how happy they looked. I, too, was now free and pretty happy about it! Over the next few weeks, I spent a lot of time outdoors, just because I could. No more window-watching for me! 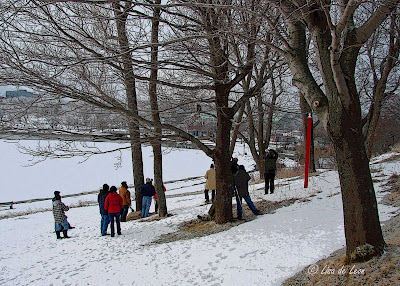 It was on December 19, 2010 that I decided to join a birdwatching tour led by Dave Brown. There were others along who were further into the hobby than I, so I was able to learn a lot on my first day dedicated to birding. That was it! I was hooked! It really isn't anything like the preconceived notion of being a "nerdy" activity. It was exciting, exhilarating and educational beyond my wildest expectation. Not only did I learn a few things about birding during this time, but it is impossible to be in the woods and not notice other things, i.e. trees, flowers, insects, butterflies and mushrooms. 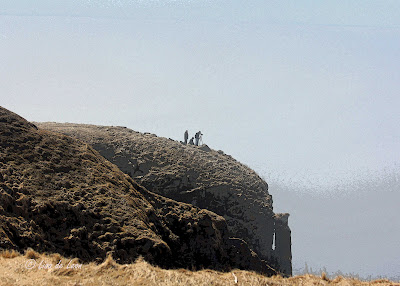 Over these three years, my interest and my basic knowledge continued to expand. Like me, many others have joined the joy of birdwatching. It seems the population of St. John's birders has doubled during this time. People of all ages and backgrounds are out there looking for feathered creatures and finding them. There are at least 30 people routinely outdoors enjoying each bird with each season and loving it. A shared interest has brought many people together in natural settings to build friendships grounded in a common interest. In part, the growth of the birding population can be attributed to the helpful support of those who have been in the field for more years than some of the new birders have lived. This kind of quasi mentoring and encouragement has really made being a new birder more enjoyable. 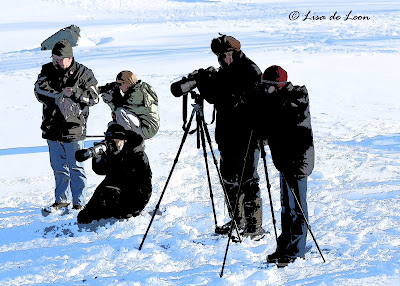 During these three years, I have seen birders gathered in so many different and out-of-the way places. The Quidi Vidi eagles attract on-lookers with both casual and serious interests.  The seagulls on the other hand attract die hard birdwatchers who are so enthralled with the activity they remain oblivious to the sub-zero temperatures and fierce winds.  I have found birders, like birds, perched precariously on rocks overlooking Cape Spear and Cape St. Mary's in an attempt to get better looks at Snow Buntings, Northern Gannets and other sea birds. "There ain't no mountain high enough...."

Numerous Flicker sites showcase the many professional-class photos of birds of Newfoundland. The number of blogs recounting trips, in depth analysis and identification of birds, Newfoundland birding records and a historical perspective add to the daily enjoyment of birding in the province. While Dave Brown launched the first NL birding blog in 2010, he has been joined by six additional bloggers. (I have provided links to all of the Flicker sites and blogs that I know of.) We have some wonderfully adept birders in the area with international recognition and some promising "up-starts" who will keep the quest alive for many years ahead.

It has been pretty special to have been able to watch this expansion of interest in birding for such a short time. What will the next three years bring?  Hopefully, lots more birds and birders to find them.
﻿
Posted by Lisa de Leon at 10:04 AM