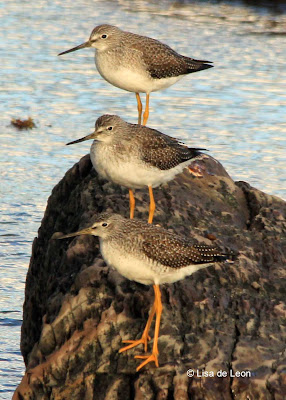 Sometimes a rainy day isn't so bad.  After all, we have had several really warm days since the beginning of November. Every one was a treasure. Though, my feeders are really busy today with Red-breasted Nuthatches, Black-capped Chickadees, Dark-eyed Juncos and a newly arrived flock of American Goldfinch.  It is actually a bit distracting, because I have to keep checking if any one of those yellow birds might be something rare. Despite all of that, I am trying to keep my head down to process some pictures today. 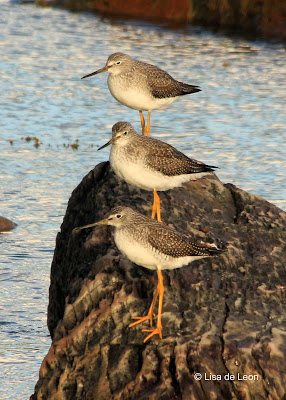 These two shots were taken at Renews Beach on October 19. It was one of the busiest shorebird days there that I saw all season. These three Greater Yellowlegs offered a great pose that I couldn't resist.  The last Greater Yellowlegs that I saw in town was about ten days ago at Mundy Pond. However, I was told there is still one lingering at Kenny's Pond.  It felt like the shorebird seasons this year was short-lived and lacked flare.

Back to work: There are so many photos backlogged on my computer that I would like to share.  As the weather gets less and less inviting, I will surely get through all of them. ﻿
Posted by Lisa de Leon at 12:16 PM