Wood Duck: What's in a Name? 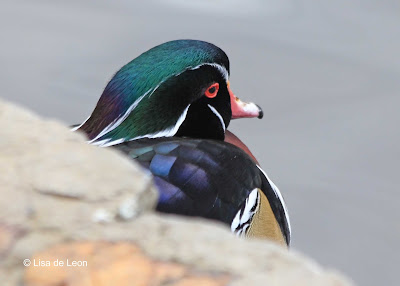 This spectacular species has shown up in the St. John's area annually over the last three years. This year, as in years before, it was in the main pool at Bowring Park. While I was photographing this Wood Duck, a little girl came over beside me and began to ask questions about this bird.  It was interesting because her mom was busy taking pictures of the swans, but this four-year old spotted the colorful, small duck mixed in with the Black Ducks, Mallards and Northern Pintails. I stopped and sat with her as we watched our Wood Duck swim about. It was a nice. 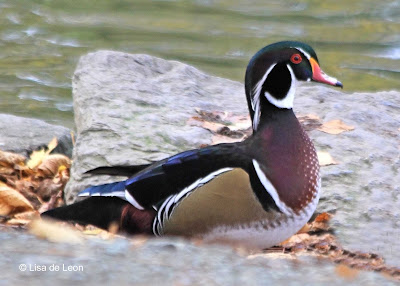 While watching this bird and answering the battery of questions like: "What is it called?" Why is it so pretty? How come it is so small?," I found myself wondering why a bird that looks like this is called a Wood Duck. Like most birds, names tell something about the bird relating to where it was found, who found it, distinguishing features or where it dwells. Well, the Wood Duck was so named because it is typically found in woodlands near ponds or wooded swamps. (Ahhh, that brings up images of the still waters filled with giant Cyprus Trees draped in Spanish Moss.) The Wood Duck nests in the cavities of trees, as well. So all things considered, Wood Duck is an apropos name. 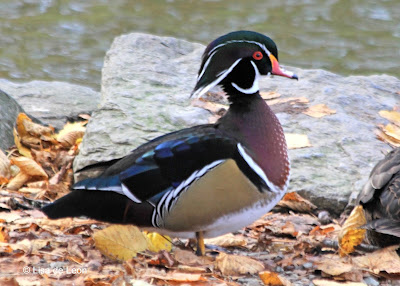 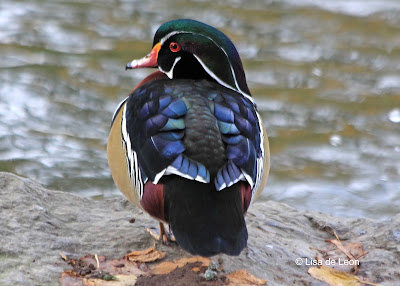 To some this bird is known as the "Carolina Duck," because it was there that it was first described. Some call it the "Swamp Duck," because that is its favorite habitat, and others call this bird the "Acorn Duck," after its favorite food. I guess he won't get many acorns while here. I noticed that it favored a small cove at the end of the pool at the park where the branches hang over the water. This must make it feel more at home.  It is a wonder it doesn't make its way to Kelly's Brook where the habitat may be more familiar. 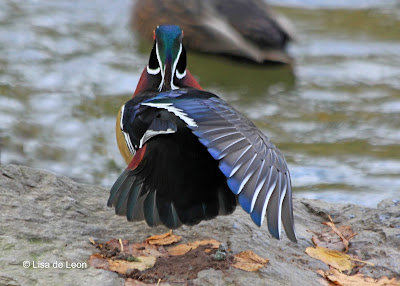 At one point in history this bird was considered for the national bird for the U.S. because it was so prevalent. I wonder what the Bald Eagle would think of that. 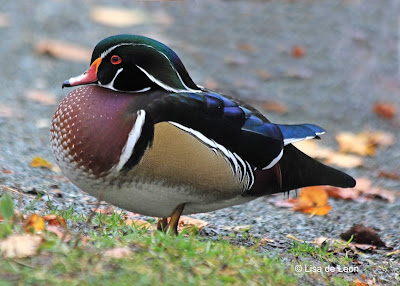 The female of this species builds the nest for the young, often 30 feet or more above the water. That should be high enough to be safe from any form of flooding during the Spring. The Wood Duck is thought to be the only duck in North America that will often have two broods. The Wood Duck is a "percher" (sits high on tree branches,) a dabbler, and a ground forager. Having learned all of this, I wish I had the moment back with the little girl in the park.  I could share so much, now. 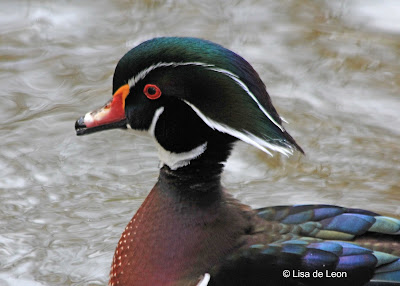 While the Wood Duck was abundant in the late 1800's, unfettered hunting and loss of habitat nearly caused the species to be extinct. By 1918, the Migratory Bird Treaty Act outlawed market hunting of migratory birds and offered a reprieve for Wood Ducks and others. Shortly after that, hunting of the Wood Duck was totally outlawed in the U.S. and in Canada. 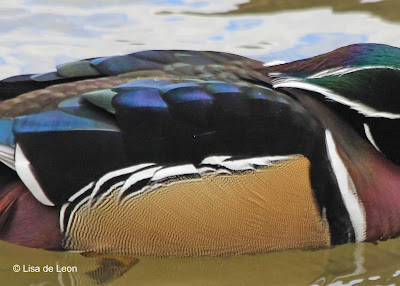 In 1942, hunters in the Atlantic and Mississippi flyways were allowed to take one Wood Duck a day. Today? Conservative bag limits are still placed on this bird, and work is on-going to protect their natural habitat.  (My appreciation goes to the U.S. Fish and Wildlife Service for providing all of this information.) 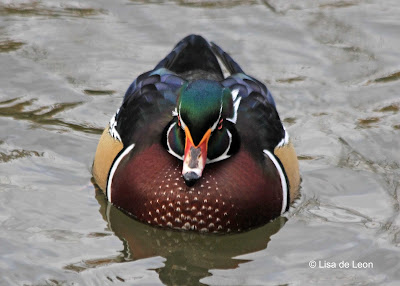 The Wood Duck is considered to be the most beautiful of all ducks. Each distinct section of its body has a stand-alone beauty that combines to create a harmonious blend of color and design. With a mixture of blues, browns, greens, reds, burgundy with splashes of black and white throughout, this bird illustrates how nature paints with perfection. 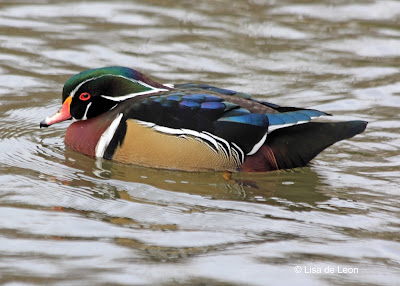 Watching this bird with a child created one of those "wake up and smell the roses" moments, where I was reminded to take a few minutes to appreciate the value and resilience of birds I encounter.  For many, they travel great distances and survive so many natural and man-made obstacles to just "be," and how nice it is that some can just "be" here.﻿
Posted by Lisa de Leon at 6:16 PM