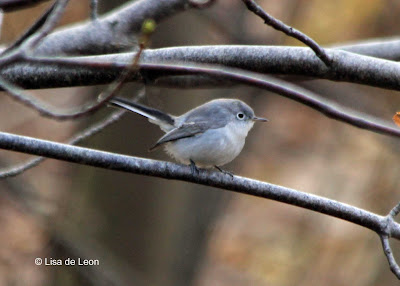 When I left home this morning to go out into the sunny, cold and windy weather, I had two birds in mind: The Nashville Warbler and the Yellow-breasted Chat. I'm afraid I saw neither. However, the morning was productive anyway. After seeing the Yellow-throated Warbler and several Common Grackles, I headed to Rennie's River.  There was only a little activity around the feeder, and that was it. I moved on to Kelly's Brook. 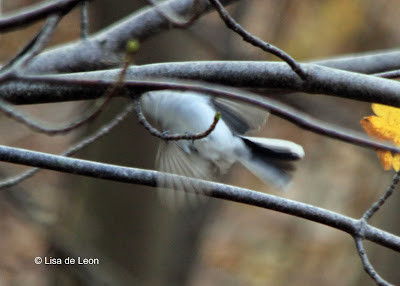 When I first arrived, there appeared to be no activity at all. First appearances can be decieving. Out of the blue a BC Chickadee showed up, then two. I followed them and came across the Yellow Warbler and several Dark-eyed Juncos. I was thinking how much the Blue-gray Gnatcatcher could look like the juncos, so I paid a little more attention. This little bird in flight (shown in the picture) could easily be mistaken for a junco, but it wasn't. I had found the gnatcatcher. 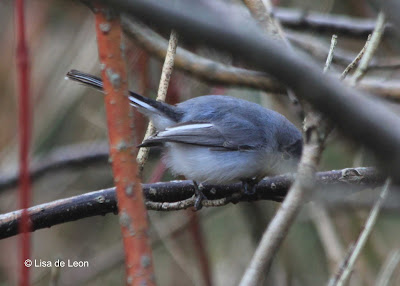 It was very active and not that cooperative, stauing several feet from the trail and entangled among all of the branches. It was not easy to get an unobstructed view. Nevertheless, it was exciting to try. 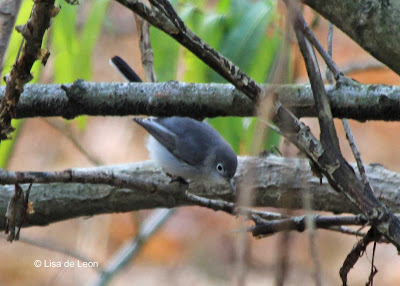 I stayed with the Blue-gray Gnatcatcher for almost a half an hour just hoping an opportunity would arise where it would come out into the open.  That really never happened. I had to get really low in order to get these shots. 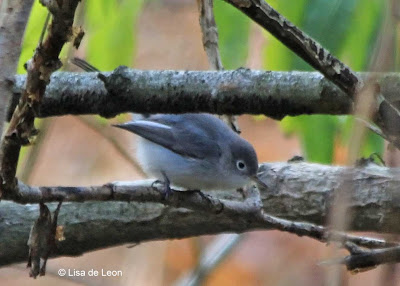 During the time I was there, the gnatcatcher easily moved around a distance of at least 40 yards from where I first saw it. It didn't seem bothered by me. It was more like it was indifferent and was going to go on about its own business, and if I wanted to follow, I could. 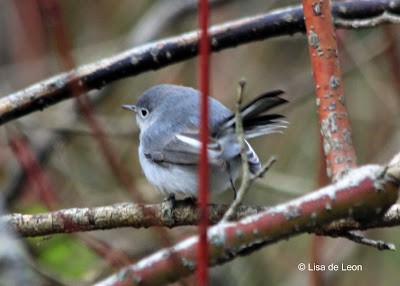 I included this image of this bird as it shows how blue it really is.  When looking for this bird, I would offer the following tips: 1) Check out everything that is blue/gray and white; 2) Watch for a very small bird; 3) Look for the eye ring; 4) Look at about eye-level as this is the area where it stayed most; 5) Check for movement in the tangled branches as it most seems to like that kind of cover; 6) Having seen it twice now, it never went into an evergreen during both times; and 7) Look for the stiff, upturned tail. 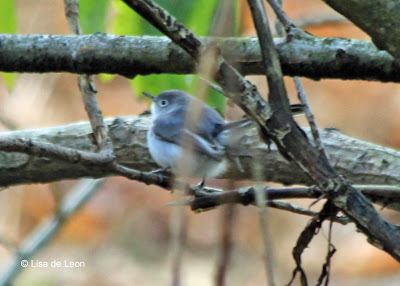 This bird, first located by Bruce McTavish on November 9th, seems to flit around the neighborhood but has most often been spotted in the original location of Kelly's Brook. A cold, crisp morning seemed to be ideal for the birds to gather in this area. It may be present there more often as the weather continues to cool. Maybe the Nashville Warbler will find its way there!﻿
Posted by Lisa de Leon at 4:33 PM