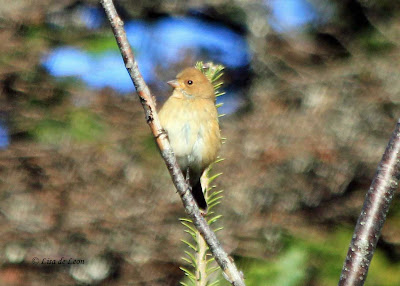 A lot of my posts are now going to be set in the past, as I have many pictures waiting to be processed and uploaded.  Today's post dates back to October 18 and 19.  I thought about the Indigo Bunting today, because I briefly saw a small brown bird yesterday in a trail off Blackhead Road that could have been a bunting.  However, I probably will never know for sure as it got away.  That happens to me a lot.  I find a different bird and then "poof," it is gone. 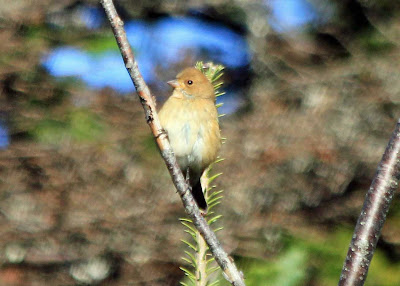 Not on October 18th.  This Indigo Bunting gave me about 15 seconds.  In bird-viewing time, that is a lot.  I was sitting in my car, motor running, when I spotted this bird fly in to have a quick look at me. There wasn't time to turn off the motor to better steady the camera, I had to get whatever shots I could at the moment. 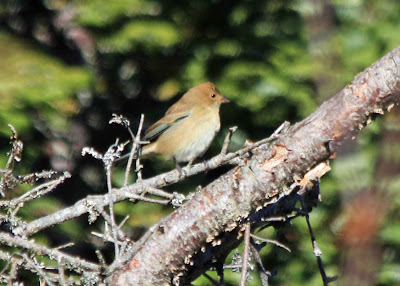 At that time, the wave of uncommon birds had slowed a lot and to see anything was a real treat. When I compared these shots with ones taken a week or so earlier, this bird has a lot more blue on it than the others.  By the time most Indigo Buntings reach us, their beautiful blue transitions into the pale brown as seen here.  However, one blue Indigo Bunting did make it to the province earlier at Middle Pond.  The pictures were really amazing.  I sat for the better part of a morning in an effort to see the "blue" Indigo Bunting.  Apparently, it had been seen for quite a while over the summer, but as soon as it was reported, it took off. Strange how that happens! 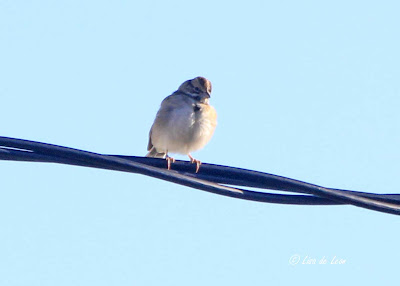 On October 19th another trip to Blackhead yielded this Lark Sparrow.  Two Lark Sparrows were frequenting the area around the middle of September.  It is a good chance this is a new bird because none were reported in the month between Sept. 17 and Oct. 19. 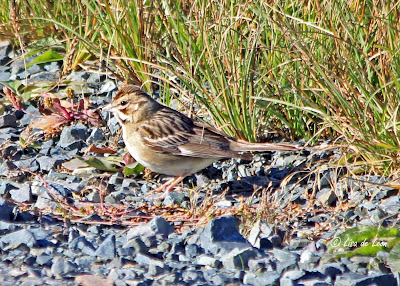 This is what you might call an "accidental" sighting.  Several birders were diligently looking for the Indigo Bunting from the day before.  While looking high and low, this Lark Sparrow flew in and landed on a power line.  It was very difficult to see it well against the back light, but Allison Mews was pretty sure this wasn't a junco. 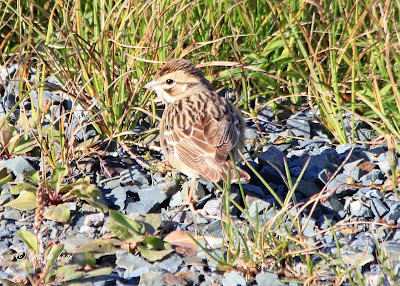 We watched and photographed and came to the same conclusion.  When the bird flew down onto the ground where we could get a better look, it was obvious it was a Lark Sparrow.  We had a lot of time to look at it before it was flushed by a passing car.  The nice thing about seeing this bird on that day was that it was a "life" bird for two of the birders enjoying it.

The not-so-nice thing, for us anyway, is that a Clay-colored Sparrow turned up with the Lark Sparrow in the afternoon, and we missed it:-(﻿
Posted by Lisa de Leon at 6:54 AM