Brant on the Flat Rock 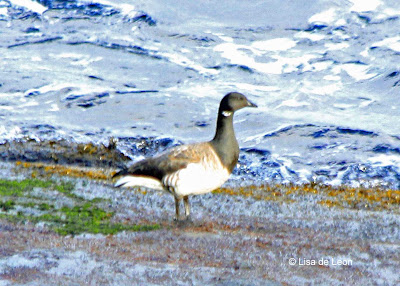 Yesterday morning, I had my heart set on seeing the Nashville Warbler reported around Rennie's River.  By 7:30 a.m. the rubber hit the road, and I was off filled with optimism.  When I arrived, the wind was making the cold air even worse. I watched and waited for a while and didn't see one bird.  Oh, well, I would try further up the river.  At the top of the stairs on the trail, I noticed a flurry of activity. At last! Quickly, I spotted Juncos, House Sparrows, and a Chickadee, but I also heard something I didn't recognize.  I watched and finally spotted a larger bird, Mockingbird like.  It popped out in the open, and I put the camera on it only to find the fence railing directly in the line of sight. The bird was gone.  Try as I might, I could not see the bird again. 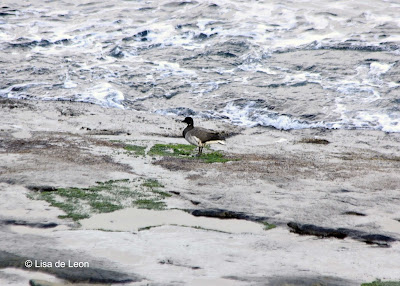 After about 45 minutes of standing in the wind and cold, I found myself chilled to the bone and had to give up.  I checked the lower Rennie's River again, and aside from a few juncos there was still no activity to speak of.  Being really cold now, I decided some birding from he car was in order, and I headed to Pouch Cove via the back roads. One very interesting bird flew double time, carried by the wind, right in front of me.  Its yellow-brown color caused me to hit the brakes and pull off.  I was a little self-conscious as I stood on the side of the road, hissing at the trees. There were two men cutting fire wood with their radio on "bust," occasionally looking at the odd woman on the other side of the road.  I gave up. 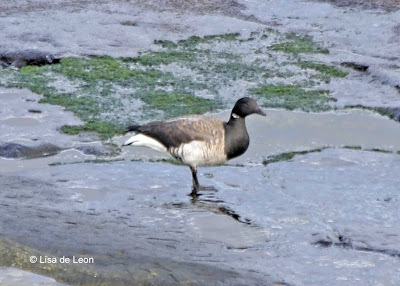 I drove my usual route for this area and swung through Flatrock to check for sea birds.  When I rounded the bend in the main community, I scanned the beach. What?  What is that?  There was a quite different bird for this area, looking particularly small next to the seagulls, standing on the rock. I pulled off onto the lookout and had a good look.  I couldn't believe my eyes. It was a Brant. 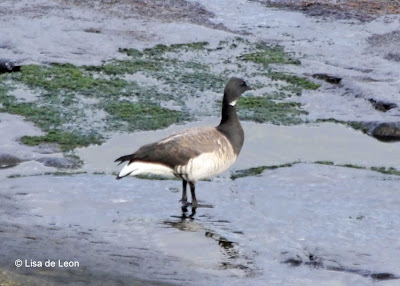 The Brant is not typically an annual visitor to our province and is considered "rare." It is pretty unusual to have seen TWO Brant in one year. It was in January that I last saw a Brant in the basin at Harbour Grace. 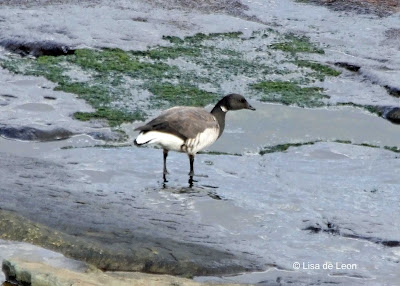 After looking, taking pictures, and checking my field guide, I called a few people to let them know about the presence of this bird.  It did spend a lot of time looking back out to sea, and there wasn't much to eat on the rock. In addition, it looked like the tide might be coming in to cover what little food there was. 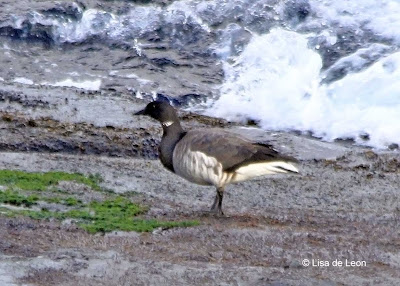 Then, I remembered the fate of the heron that showed up in Flatrock in the Spring. I thought if anyone wanted to see this bird, they better hurry. 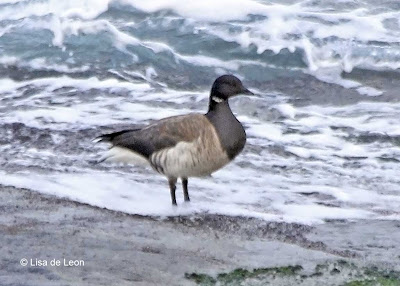 It is really remarkable the number of rare birds that make it to our shores, and I can only imagine how many come and go without ever being documented. It was a real accident and stroke of luck that I happened upon this one. 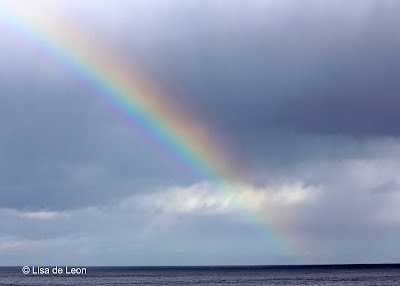 While sitting for about half and hour waiting for the sun to lighten up the eye of this dark-headed bird, a rainbow appeared on the horizon. Nevertheless, the clouds never did open up and let a little light shine on this bird. On my way home, I passed another birder on the way out to see the bird.  I hope more made it.﻿
Posted by Lisa de Leon at 7:38 AM